Statement of the Law:

Every farmer knows by experience that, if a particular piece of land is cultivated over and over again, it generally yields less than proportionate returns.

If every year more, and still more, units of labour and capital are put into it, the successive return per unit does not increase, but actually decreases.

“An increase in the capital and labour applied in the cultivation of land causes in general a less than proportionate increase in the amount of the produce raised, unless it happens to coincide with an improvement in the art of agriculture.”

Suppose there is a farmer who cultivates a small farm. He applies some capital and labour to his farm in certain fixed quantities, which we call “doses”.

Suppose each dose of capital and labour costs him Rs. 500 and the return to each dose is as follows:

It appears that as more doses are applied, the marginal return (i.e., the additional return) goes on decreasing. The second dose adds 10 quintals, the third 8 quintals, the fourth 5, and so on (see column 3). The total return no doubt goes on increasing (column 2) but it should be carefully noted that it does not increase proportionately.

We may also notice that even the total return begins decreasing at a certain stage. The stage of diminishing returns in the case of total return, however, comes much later, and if the farmer is prudent, it may never come. The 6th dose makes no addition to the total, and the 7th even decreases it. It seems that at this stage too many men or too much manure has been applied so that, instead of doing any good, they have done harm.

The above illustration can be represented diagrammatically as follows: 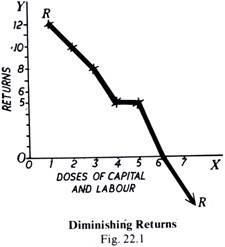 Limitations of the Law of Diminishing Returns:

In Dr. Marshall’s statement of the law given above, the phrase “in general” is significant.

It means that the law applies generally, but may not apply always the following exceptions may be noted:

(a) New land, just brought under cultivation, will go on improving with the application of labour and capital. Thus, for a few years in the beginning, the returns will be more than proportionate. The marginal returns will increase instead of decreasing in the beginning.

(b) Sometimes the capital applied to land may have been insufficient. For some time, therefore, increased application of capital may bring in more than proportionate returns. In this case also, the marginal return will go up at first instead of going down.

(c) If improved methods of cultivation are applied; then, too, the marginal return will increase instead of diminishing. But these are only temporary checks; ultimately the law must operate.

When different laws of returns are found to operate at different times, the figure will be as given below (Fig. 22.2): 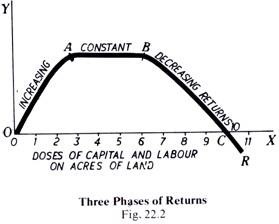 The Law in Intensive and Extensive Forms:

It is so either because the new land is inferior (otherwise it would have been cultivated first), or because it is farther away, and the cost of transport increases the cost of production. Thus, the law of diminishing returns also applies where cultivation is carried on extensively. The above diagram represents the law in the intensive form. But the same diagram can be made to represent the extensive form too, if instead of the doses being measured along OX, we measure acres of land.

Application of the Law of Diminishing Returns:

We have discussed the law of diminishing returns with reference to agriculture. But its application is not confined to agriculture alone. It applies equally to other extractive industries like fishing, mining and quarrying. It begins operating even in manufactures, if they are expanded beyond the optimum point.

Dr. Marshall has pointed out that the part which nature plays conforms to diminishing returns and the part which man plays brings in increasing returns. It is argued that nature is supreme in agriculture, whereas man dominates in manufacturing industries. The inference is drawn that in agriculture man’s ingenuity is held in check by nature, and he feels helpless.

In manufactures, however, man is free to organize business, and introduce new economies undisturbed by nature. The work in the factories can go on continuously and nature cannot interfere. Man is the master. Hence there are increasing returns. Broadly speaking, this is true.

In the same manner, the law of increasing returns does not always operate in industry. If the industry is expanded beyond the optimum point, the returns will diminish interact of increasing. Hence this statement is not always true. Correctly speaking, increasing and diminishing returns are two aspects of one and the same law. They apply both to agriculture and to industry, only at different stages.

Why the Law of Diminishing Returns Operates in Agriculture:

There are several reasons why the law of diminishing returns applies more generally to agriculture.

(iv) Agricultural operations are spread over a very large area and supervi­sion is difficult. This reduces the yield.

(v) Agricultural labour is in a state of enforced idleness for a part of the year. The work is of intermittent nature. This adds to the cost.

(vi) Soil gets exhausted after some time and yields less and less. This leads to the operation of the law of diminishing returns.

(vii) All lands are not equally fertile. If cultivation is extended to inferior lands, the returns per acre must diminish. This will mean diminishing returns.

Agricultural yields are poorer in India than in other countries, because rainfall is uncertain, methods of cultivation are inefficient, and the peasants are too poor to invest capital in land. Irrigation facilities are also inadequate. Hence the law of diminishing returns applies to Indian agriculture with a special force. Until and unless these defects are remedied, the agricultural yield in India will not compare favorably with that of other countries.

We have discussedthe law of diminishing returns with reference to agriculture. But the law is not peculiar to agriculture. It applies to industry, too, under certain circumstances. Dr. Marshall’s statement of the law  relates to agriculture only. But economists now give the law a much wider application.

The law operates wherever the supply of an essential factor of production is limited. If an essential factor is so scarce that either its additional supplies cannot be had at all, or only inferior ones are available, the law of diminishing returns must operate. We require all sorts of factors for production.

If we can obtain some and cannot obtain others, the proportion in which we combine the factors becomes defective, and the returns begin diminishing. Thus, diminishing returns result out of a defective or an unbalanced combination of the factors of production. Another way of putting the same thing is this: If variable factors are combined with a fixed factor, the return for the factors increased will diminish. Benham states the law thus:

“As the proportion of one factor in a combination of factors is increased, after a point, the marginal and average product of that factor will diminish.”

Stated thus, the law is applicable not only to agriculture but it also operates wherever the above conditions are found to exist. The phrase “after a point” may be carefully noted. In the beginning, the return may increase but after a point it will diminish. Causes of the Law of Diminishing Returns

In conclusion, we may underline two important causes of the operation of the law of Diminishing Returns:

(a) Factors of production are imperfect substitutes for one another so that when an essential factor cannot be increased or its substitute cannot be had, costs must rise or returns must diminish: (b) The second reason is the lack of co-operation among the factors of production when the firm has expanded too much. Lack of cooperation results in the misuse of the machinery or waste of materials. Hence costs rise or returns diminish.

The following diagram (Fig. 22.3) is usually drawn to illustrate the law of diminishing returns in the form of increasing costs:

Importance of the Law of Diminishing Returns in Economic Theory:

This law is one of the most fundamental laws of Economics. It lies at the root of almost all economic discussions. In particular, the Malthusian theory of population is based on it. Food supply does not keep pace with the increase in population simply because agriculture is subject to the law of diminishing returns. If agricultural yields could be increased proportionately, even one acre of land could, theoretically speaking, produce enough food for the people of the whole world. There would then have been no Malthus to propound his theory of population.

The Ricardian theory of rent is also based on it. Not only do the superior lands yield a surplus, but also the earlier doses of labour and capital yield higher returns than the later ones. This surplus is called economic rent, and is due to the operation of the law of diminishing returns, both in the intensive and in the extensive forms.