The Applicability of the Law of Diminishing Returns!

The law of variable proportions which states marginal physical prod­uct of a variable factor eventually diminishes, even if it increases in the beginning.

Up till Marshall, it was thought that there were three laws of production-diminishing, constant and increasing returns – which were quiet distinct and separate.

Now, modern economists have veered round to the view that diminishing, constant and increasing returns to a factor are not three separate laws but they are three phases of one general law of variable proportions.

Moreover, up till Marshall it was thought that law of diminishing returns applied to agriculture while the manufacturing industries were characterised by increasing or constant returns. But this is no longer believed to be correct; Law of diminishing returns has a vast general applicability. This law applies as much to industries as to agriculture.

Whenever some factors are fixed and the amount of an other increases, then the technol­ogy remaining the same, diminishing returns to factor are bound to occur eventually both in agricul­ture and industries. We have given above the various definitions of the law of variable proportions which lay stress on its general and universal applicability.

If the constant returns could be obtained by applying more labour on a given piece of land, then as the population increased we could use more labour on that land to get proportionate increase in agricultural output. In that case the world, especially the developing countries like India, would not have to face the problems of food shortage and over-population.

Professor R.G. Lipsey is right when he says, “Indeed, were the hypothesis of diminishing returns incorrect, there would need to be no fear that the present population explosion will bring with it food crises. If the marginal product of additional workers applied to a fixed quantity of land were constant, then world food production could be expanded in proportion to the increase in population merely by keeping the same proportion of the population on farms. As it is, diminishing returns means an inevitable decline in the marginal product of each additional labourer as an expanding population is applied with static techniques, to a fixed world supply of agricultural land.”

Some people misunderstood the law and asserted that as the population increased, the quantity of land remaining unchanged, the productivity per person would necessarily decline. But this is quite wrong. The law of diminishing returns, as stated above, has a great proviso that technical knowledge, equipment, etc., remain the same.

Capital equipment per worker engaged in agriculture has greatly increased. As a result, agricultural productivity has registered a tremendous increase in the present-day advanced countries. On the other hand, developing countries have not made much progress in technical knowledge and in accumulating and using sufficient capital equip­ment like machinery, tools, fertilisers, etc.

It is thus clear that actual experience regarding the behaviour of agricultural productivity in both developed and developing countries is in no way a contradiction to the law of diminishing returns, the operation of which is subject to the condi­tion that technical knowledge, capital equipment and other aids of production remain the same. 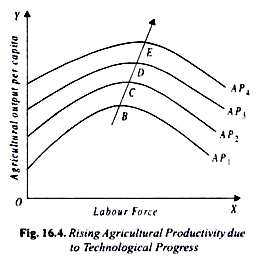 But in actual practice along with the increase in the labour force, the average productivity of labour in agriculture has been rising due to the progress in technology, that is, due to the upward shift of AP curve. As a result of progress in technology, the economies of developed countries have been moving along the arrow mark line BE which indicates the rising average productivity despite the increase in the labour force.

We, therefore, conclude “unless there is continual and rapidly accelerating improvements in the techniques of production, the population explosion must bring with it declining living standards over much of the world and eventual widespread famine.

Meaning of Capital: Fixed Capital, Working Capital and Human Capital
Students’ Guide to The Nature and Scope of Macroeconomics