The technology can be regarded as primary source in economic development and the various technological changes contribute significantly in the development of underdeveloped countries.

Technological advancement and economic growth are truly related to each other.

The growth of net national income in developed countries cannot be claimed to have been due to capital alone. Kindleberger observed that major part of this increased productivity is due to technological changes. Robert Solow estimated that technological change accounted for about 2/3 of growth of the U.S. economy; after allowing for growth in the labour force and capital stock.

In the above figures 1 to 3 R’ is an isoquant of production function before technological change and R’ represents the same quantities output after the innovation in the first figure. The innovation is neutral with respect to labour and capital. The new production function R shows that the same output can be produced with less labour and less capital after technological advancement.

It is generally assumed that the technological advancement is even more important than capital formation. But the capital formation alone can bring out economic development to a limited extent and the progress stops if there is no technological change. A country cannot remain dependent on the import of technology. A nation that spends more on science and technical research will tend to grow faster than another country accumulating more capital but spending less on technological. 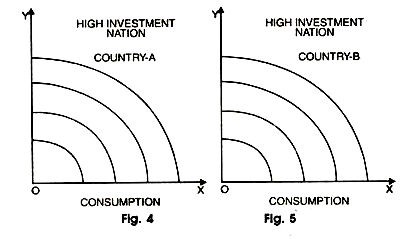 In the first figure (4) the country A concentrates on accumulation of more capital resources while in second figure 5, country B focuses attention on technological aspects but does not regulate the accumulation of capital. It is clear that the progress of country B is faster than that of country A due to the high rates of technological development. The concept that technological progress is more important than capital formation is illustrated with the help of production function in the diagram 6. 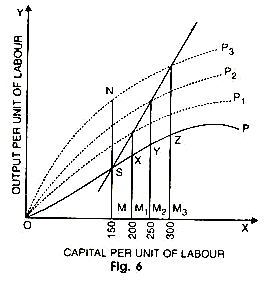