Law of diminishing returns explains that when more and more units of a variable input are employed on a given quantity of fixed inputs, the total output may initially increase at increasing rate and then at a constant rate, but it will eventually increase at diminishing rates.

In other words, the total output initially increases with an increase in variable input at given quantity of fixed inputs, but it starts decreasing after a point of time.

The law of diminishing returns is described by different economists in different ways, which are as follows:

According to F. Benham, “As the proportion of one factor in a combination of factors is increased, after a point, first the marginal and then the average product of that factor will diminish.”

In the words of Alfred Marshall, “An increase in the Capital and Labour applied in the cultivation of land causes, in general, less than proportionate increase in the amount of produce raised unless it happens to coincide with an improvement in the art of agriculture.”

The assumptions made for the application of law of diminishing returns are as follows:

i. Assumes labor as an only variable input, while capital is constant

ii. Assumes labor to be homogeneous

iii. Assumes that state of technology is given

iv. Assumes that input prices are given

Let us understand the law of diminishing returns with the help of an example. Suppose a mining organization has machinery as the capital and mine workers as the labor in the short-run production. For increasing the level of production, it can hire more workers.

In such a case, the production function of the organization would be as follows:

Where K is constant

The production function for labor-output relation is assumed to be:

For example, if L is 10, then the value of Q would be as follows:

This output-labor relationship can be represented in the tabular form of a production function, which is shown in Table-3: 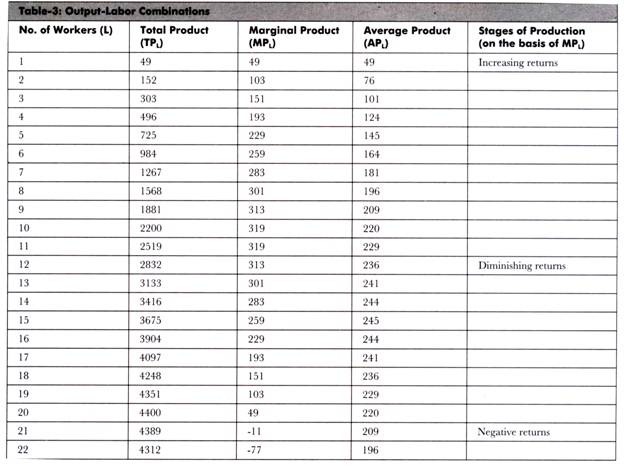 Marginal product of labour can be calculated with the help of the following formula:

Where, ∆Q = Change in output

For example, in Table-3, when L=2, then marginal product is as follows:

In present case, the value of L is one in every case. Therefore, we can only use ∆Q to calculate the marginal product.

The formula used to calculate average product is as follows:

For example, in Table-3, when L =3, then average product is as follows:

In Table-3, last column shows the three stages of production, which are explained as follows:

Refers to the stages of production in which the total output increases initially with the increase in number of labor table-3 shows the increase in marginal product till the number of workers increased to 10 and 11. The marginal output produced by tenth and eleventh worker is same, which implies that they yield constant returns.

Figure-2 shows the graphical representation of the three stages of production:

There are two types of laws that work in the three stages of production. One is law of increasing returns in stage I and law of diminishing returns in stage II. There are several factors that are responsible for the application of these laws. Among these factors, one of the most important factors for the law of increasing returns is fixed capital. Less number of labor lead to unutilized capital, because capital is indivisible.

For example, if the capital-labour ratio is 2:6 and capital is indivisible and labor hired is less than six, then capital is unutilized. Another important factor responsible for the increase of labor productivity is division of labor. This can be achieved by hiring more workers to reach the maximum output or optimum capital-labor ratio.

Significance of Law of Diminishing Returns:

This is because the inputs in agriculture production are natural, while in industrial production, inputs are generally manmade. Therefore, if increasing variable input is applied to fixed inputs, then the marginal returns start declining.

As shown in Table-3, when the number of workers is 20, then the output reaches to its maximum level. In such a case, an organization would prefer to hire 20 workers to meet the optimum level of output in case if the labor is available at free of cost, which is not possible. Hiring workers always incurs a cost for an organization in terms of payment of wages in exchange of services rendered by workers.

Therefore, the number of workers employed depends on optimum output, product price, and wage rate. The maximum profit can be attained if marginal cost is equal to marginal revenue. In the present case, marginal cost would be equal to marginal wages that is MC=MW. In case of factor employment, the concept of Marginal Revenue Productivity (MRP) is used. MRP refers to the value of product obtained by multiplying the price of product and marginal product of labor.

The following formula is used to calculate MRP:

Let us understand MRP with the help of an example. Suppose the price of coal is Rs. 10. If Table-3 is considered, MPL for the fifth worker is 229.

In such case, MRP for the fifth worker can be calculated as follows:

Similarly, MRP can also be obtained for different workers. By considering Table-3, suppose the wage rate (equal to MRP) fixed by an organization is Rs.2900. In such a case, the organization would hire 7 workers because if it hires the 8th worker, then MRP would be Rs. 3010 (301*10). This would lead to a loss of Rs. 110 for the organization. 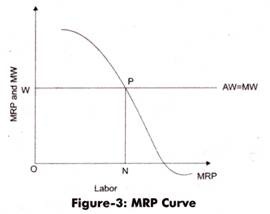 This curve can be compared with MW curve. For example, in present case, wage rate is equal to OW. When wage rate becomes constant, then average wage is equal to marginal wage (AW = MW). The graph shows a horizontal straight line in case the wage rate become constant. The point at which MRP curve and straight line of AW= MW intersects is regarded as the optimal number of employees required to produce maximum profit.