The different market forms depend on the degree of competition prevailing in the market.

Broadly speaking, we have the following market forms.

Pure Competition is said to exist when the following two conditions are fulfilled:

(i) Large Number of Buyers and Sellers:

The second condition is that the articles produced by all firms should be standardised or identical. In case of farm produce, e.g., Kalyan wheat, it is immaterial for the purchaser as to who has produced it. He can buy it as well from the one as from the other. This condition ensures that the same price rules in the market for the same commodity. In case the output is not standardised (i.e., it is differentiated), each individual firm will be in a position to influence the market price.

Whether the products are identical or not has to be looked at from the purchaser’s angle. Even if the products are identical, the purchaser may have a prejudice against the output of a particular firm and may consider it different. That is, if the consumers regard the commodities as different, they should be considered different for purposes of classification in spite of the fact that they are actually identical.

In these circumstances, if a firm raises its prices, it will lose all customers. It can sell as much as it likes at the prevailing price. Why should it then think of lowering its price? Hence it cannot raise its price and it need not lower it. That is why the prevailing market price is accepted and acted upon by all dealers. Thus, if the above two conditions, viz., homogeneous products and a large number of buyers and sellers are found in a market, it is said to be under pure competition.

Under pure competition, the average revenue curve (also called demand curve) of a firm will be a horizontal straight line, which means that any firm can sell any quantity at the prevailing price. Since the number of firms is very large, no individual firm has the power to vary the market price. Also, since the products are identical from the consumers’ point of view, the price paid by them cannot be different. This is represented by the following diagram (Fig. 25.1). 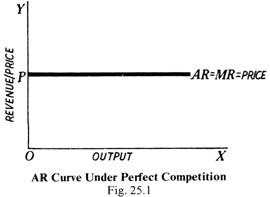 OX and OY are the two axes. Along OX is represented the output and along OY the price/Revenue. At OP price, the sellers can sell as much as they like. They cannot charge more and they will not charge less. If they raise the price, they will lose their customers, and if they charge less, they will be unnecessarily losing.

Examples of pure competition are to be found in the case of farm products, e.g., wheat, cotton, rice. There are a large number of producers, each producing an insignificant proportion of the total market supply. Their product is similar and none of them is in a position to influence the market price by his own individual action. In other fields, we seldom come across pure competition.

Perfect competition, on the other hand, is a wider term. It includes the two conditions of pure competition mentioned above as well as some more conditions mentioned below.

The existence of the following conditions in a market will make it a perfect competition market:

(i) Large number of buyers and sellers.

Under perfect competition, all firms in the industry will be earning normal profit. This will happen only if there are no restrictions on the firms’ entry into, or exit from, that industry. If the profit is more, new firms will enter and the extra profit will be competed away; and if, on the other hand, profit is less, some firms will quit raising the profits for the remaining firms.

Another assumption of perfect competition is that the purchasers and sellers should be fully aware of the prices that are being offered and accepted. In case there is ignorance among the dealers, the same price cannot rule in the market for the same commodity. When the producers and the customers have full knowledge of the prevailing price, nobody will offer more and none will accept less, and the same price will rule throughout the market. The producers can sell at that price as much as they like, and the buyers also can buy as much as they like.

(vi) Perfect Mobility of the Factors of Production:

The main features of monopolistic competi­tion are:

(i) In monopolistic competition, the number of dealers is quite large but not as large as under perfect competition.

(ii) The products are not homogeneous; they are, on -the other hand, differentiated by means of different labels attached to them, such as different brands of toilet requisites.

(iii) Either in ignorance or on account of transport costs or lack of mobility of the factors of production, the same price does not rule in the market throughout. Rather different prices are charged by different producers for products which are really similar but are made to appear different through advertisements, high pressure salesmanship and labelling and branding. The result is that each producer comes to have a hold on a clientele from whom he can charge higher prices.

(iv) Under monopolistic competition, the demand curve or sales curve, or what is also called average revenue curve, is not a horizontal straight line. II is, on the other hand, a downward sloping curve, i.e., the seller can sell more by reducing price. Under perfect competition, he need not reduce the price, for he can sell any amount at the prevailing price.

Under monopolistic competition, the seller can also charge higher prices because his customers are attached to him. He can thus have a price policy of his own, whereas a seller under perfect competition has no price policy; he has merely to accept the market price as given.

(v) Under imperfect competition, the demand for the product is not perfectly elastic; it is responsive to changes in price.

In duopoly, there are two sellers, selling either a homogeneous product or a differentiated product. These two sellers between them enjoy a monopoly in the sale of the product produced by them.

The word ‘oligopoly’ is from the Greek words Olig, meaning ‘a few’ and ‘poly’ veaning sellers. Thus, a market form, in which there are only a few sellers, is called oligopoly. They may be producing and selling either a homogeneous or a differentiated product, the former is called perfect oligopoly and the latter imperfect or differentiated oligopoly.

In India, till recently, distributor of petrol was in the hands of Burmah Shell, Esso, Caltex and Indian Oil Company. The other example of oligopoly is the manufacture of motor cars by Hindustan Motors (Ambassador Car), Premier Automobiles (Fiat Cars) and Standard Motor Company (Standard Cars).

In monopoly, a single producer or seller controls the market. There are no close substitutes for his product. He controls the supply and he can fix the price. He is the firm and he also constitutes the industry. Thus, under monopoly the distinction between the firm and industry disappears. The average revenue curve or the demand curve always slopes downwards to the right as in monopolistic competition, but it is less elastic in monopoly than in monopolistic competition.

The following chart shows at a glance different types of market forms on the basis of the nature of competition:

(a) Monopolistic Competition – Many – Differentiated

(b) Perfect Oligopoly – A few – Homogeneous

Pure or Absolute Monopoly – One – Homogeneous

Markets: Definition, Classification, Condition and Extent of the Market
Price Determination under Perfect Competition: (With Diagram)