Most people are risk averters and therefore they buy insurance to avoid risk.

Now an important question is how much money or premium a risk-averse individual will pay to the insurance company to avoid risk and uncertainty facing him.

Suppose the individual buys a house which yields him income of Rs. 30 thousands per month. But if the house catches fire and due to the damage caused, his income from it falls to Rs. 10 thousands per month and thus he suffers a loss of income. For the sake of simplifying analysis suppose there is 50 per cent chance of the house catching fire. Then they expect value of income in this risky and uncertain situation is 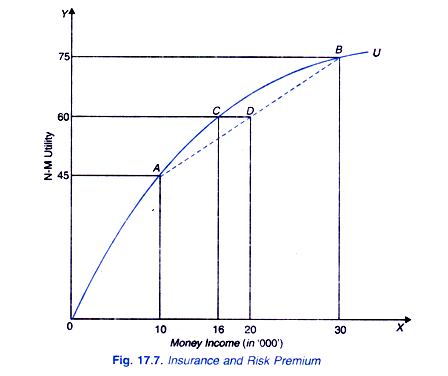 This means that if the individual gives up Rs. 4 thousands (20 – 16 = 4) from his uncertain expected income he will get the same utility of 60 as with a certain income of Rs. 16 thousands. Rs. 4 thousands equal to distance DC is called the risk premium.

Therefore, the risk premium is the amount of money that a risk-averse individual will be willing to pay to avoid the risk. By paying the risk premium the individual can insure himself against a large loss from a fire and to get an assured or certain income. It is clear from above why people buy insurance for fire, accident, ill health and even life.