According to Prof. Hibden: “Utility is the ability of a good to satisfy a want.” According to Nicholson: “Utility may be the quality which makes a thing desirable.”

(i) Utility is Subjective:

The utility of a commodity is always subjective because it depends upon the consumer as much as on commodity. It is the psychological satisfaction as feeling of the consumer. Hence, it is internal not external.

(ii) Utility is Relative and Variable:

Utility is highly relative and variable. It varies from person to person and from time to time or place to place for the same individual. Again, a same commodity can give different utility to different people. Because, utility a person derives from either good or service depends not only on his psychological attitude but also on his intensity of desire.

It is abstract in a sense as it cannot be seen or touched or felt. For example, teaching of a teacher, advice of a lawyer can neither be seen nor touched. Hence, utility is abstract.

Utility is totally different from usefulness and morality. It means a good possesses utility even when it may not be useful or does not possess any moral and ethical importance. For example, we know that smoking or wine are harmful. However, at the same time they are very useful for an individual who is either drunkard or smoker because these harmful goods have utility to such persons.

It is not necessary that a commodity possessing utility also gives pleasure whenever it is consumed. An injection possesses utility to an individual. However, it gives him/her physical pain. Hence, utility and pleasure are unrelated.

Utility of a commodity changes from time to time. For example’ an umbrella has immense utility in rainy season, but has no utility or relative less utility during winter time.

Utility of a commodity changes with the change in shape, size and formation. For instance, a piece of timber wood has very less utility for an individual, but its utility increases when is transformed into nice looking furniture.

When the change in possession of a commodity increases utility, then it is known as possession utility. The utility of a match box is not so high for producers as it is for the households and smokers,

It refers to the total psychological satisfaction a consumer derives by consuming a particular commodity of several units. In mathematical terms, total utility is the direct function of the number of units of a commodity. It can be written as, 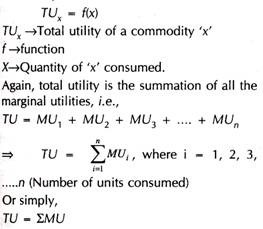 Thus, marginal utility can be expressed as: 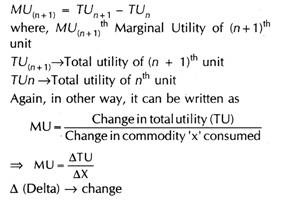 (i) When TU increases with the increase in one unit of extra consumption, then MU > 0

(ii)When TU remains same with the increase in one unit of extra consumption, then MU = 0

(iii) When TU decreases with the increase in one unit of extra consumption, then MU < 0.

Value: Value in Use and Value in Exchange
Role of the Government towards the Development of the Country