The rapid and excessive increase in population is called Population Explosion. In India, population has increased tremendously in post-independence period.

It increased more than 7.80 crore between 1951-61. Population has been increasing constantly since 1951.

Size and Growth of India’s Population: 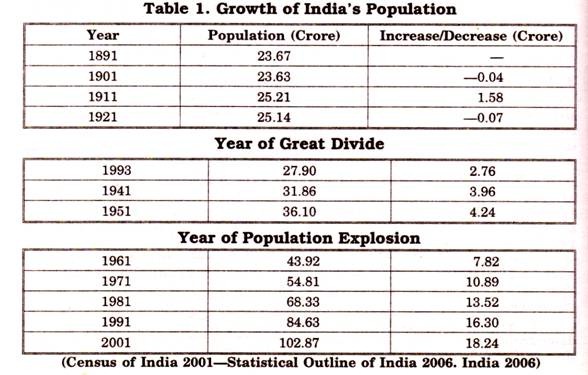 The Growth of India’s population can be studied in four periods of time:

Population decreased by 4 lakh in this decade. Natural calamities like famines, plague, malaria etc. played havoc with the lives of people.

Population rose by 137 lakhs in these 10 years. Death rate was low as this period remained free from natural calamities.

Population decreased by 7 lakhs during this decade. Famine, Plague, Cholera and Malaria etc. were the cause for this decrease.

In this decade, the population increased at a constant rate. That is why; the year 1921 has referred as ‘Year of Great Divide’ in population history.

Population increased by 3.96 crore during this period and rate of growth become 14%.

Population increased by 4.24 crore. Due to partition of the country, the growth rate decreased a little.

In this period population recorded increase of 10.82 crore.

During this period, population increased by 13.50 crore.

In this decade, the population was 84.63 crore.

The population of India increased by 18.24 crore.

The growth rate of Indian population is more than China and Sri Lanka whose population grows at a rate of 1% per year.