The upcoming discussion will update you about the difference between total utility and marginal utility.

Utility, in ordinary sense, means usefulness. But, in economics, it means want-satisfying power of a commodity or service — the power to satisfy a human want. Thus, a pen has utility to a teacher but not to an illiterate farmer. As Joan Robinson comment: “Utility is the quality in commodities that makes individuals went to buy them, and the fact that individuals went to buy commodities shows that they have utility.”

Utility as an economic concept may be cardinal or ordinal. Cardinal utility may be said to have three distinguishing marks:

(a) It is measurable. It can be measured by the money a man is willing to spend for a commodity. Money is the measuring rod of utility and for this its marginal utility is assumed to be constant,

(b) Utility is quantifiable. That is to say, one can precisely say how much utility he is enjoying,

The distinction between total utility and marginal utility is vitally impor­tant in economic analysis.

We may show the relation between marginal utility and price-in Table 1:

The above illustration shows that as a consumer gets more and more of oranges, the additional or marginal utility of oranges to him decreases.

It is possible for marginal utility to become zero if a point of consumption is reached where no more satisfaction is gained from further units.

The distinction and relation between total utility and marginal utility be shown in the following table: 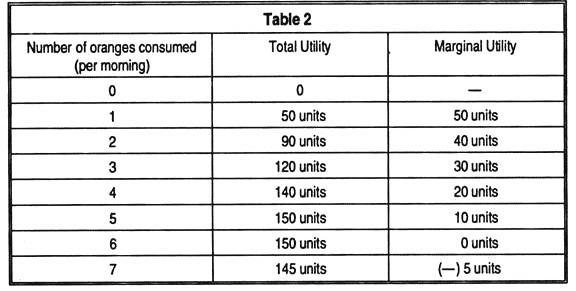 The above table reveals the following points regarding the relation between total utility and marginal utility:

3. The total utility begins to decline when the 7th orange is consumed. At this stage marginal utility is negative.

The Need for and Importance of the Distinction:

As Marshall had Commented:

“That paid of a thing which a consumer is just induced to purchase may be called his marginal purchase because he is at the margin of doubt whether it is worth his while to incur the outlay required to obtain it.”

Moreover, the distinction brings into focus the important point that with the increase in the consumption of a commodity its total utility may increase up to a certain point, but its marginal utility gradually diminishes, then becomes zero and is finally negative. Negative utility goes by the name ‘disutility’.

The Paradox of Value:

The classical economists like Adam Smith and David Ricardo were sur­prised by the fact that the price of water was less than the price of diamonds. So, a basic paradox was encountered — known as the paradox of value. The fact is that the classical economists failed to draw a distinction between total utility and marginal utility. The total utility of water is very high because we cannot live without water.

But, its marginal utility is low because after consuming a few glasses of water a thirsty man may not have any desire or inclination to consumes another glass. By contrast, the total utility of dia­mond is very low because we can go without it. But, due to scarcity, we are ready to pay very high price to acquire an additional unit of diamond. This means the marginal utility of diamond is very high. This is why the price of diamond is higher than the price of water.

But, people are eager to pay a high price for diamond because of its limited supply and the consequent high marginal utility. So, it is marginal utility, not the total utility, which determines the value of a commodity, at least from the demand side.

Relevance of the Cardinal Measure of Utility:

The neo-classical economists like W.S. Jevons, Alfred Marshall and others used the cardinal concept of utility (cardinal numbers: 1, 2, 3, etc.) to explain the theory of consumer demand. This concept of utility treats utility as something which can be measured and quantified as 1, 2, 3, etc. The units of measurement of utility are imaginary- they are called utils. Thus, under some given conditions, we may think of one apple as having 8 utils and one orange as having 4 utils. This is equivalent to saying that one apple has twice as much utility as one orange.

Such a concept of utility enables us to measure and quantify the utility that a person derives from one or many commodities. This is really useful for expressing subjective phenomenon like utility into concrete terms and for this reason it becomes easier to measure marginal utility and total utility of different commodities.

But, modern economists like John Hicks and R.G.D. Allen have pointed out that, utility is essentially a subjective phenomenon; it cannot be objec­tively measured, i.e., it cannot be numbered. So, they have expressed utility in ordinal numbers (i.e., 1st, 2nd, 3rd, etc.) to show only the level of satisfaction derived from the consumption of a commodity.

On an analysis of the above table, we find that as a man consumes more and more units of a commodity:

(b) When MU is zero then TU is maximum,

(c) When MU is negative TU will be diminishing.