Equilibrium level of national income is determined by aggregate demand which is composed of consumption and investment expenditures (assuming a pri­vate sector economy without any trade).

where speculative demand for money de­pends on the rate of interest, r.

where W is the money wage.

However, the aggregate production func­tion, investment function, and labour demand function of Keynes do not differ from the clas­sical forms.

Keynesian income determination theory can explain macroeconomic problems once we incorporate money market in our analysis. It is the rate of interest, determined by the de­mand for money and the supply of money, that integrates goods market and money market. Rate of interest not only influences invest­ment but also (speculative) demand for money.

Thus, a synthesis of income and mon­etary analysis is brought about by the interest rate. Equilibrium national income is deter­mined in the goods market when saving equals investment. Monetary equilibrium is attained in the money market when demand for and supply of money are equal to each other.

By establishing equilibrium in the goods market and money market, equilibrium level of national income and the rate of interest are simultaneously determined. To establish the ‘general equilibrium’, we use the Hicks- Hansen tool—most popularly known as the IS-LM tool. The IS-LM analysis, a neo- Keynesian analysis, explains Keynesian mac­roeconomic system that takes into account goods market and money market, simultane­ously.

Goods Market Equilibrium: The IS Curve:

Keynesian theory of aggregate demand is inadequate to explain macroeconomic system when the money market is introduced. So, we need to establish a link between the money market and the goods market through the rate of interest. Now, we treat interest rate as a variable whose equilibrium value is deter­mined simultaneously with that of the level of income.

In the goods market, we have:

(i) the saving function,

(ii) the investment function, and

These are expressed as:

Once we determine investment expenditure, we are able to find out the equality between in­vestment and saving. Consequently, equi­librium national income is determined in the goods market. In fact, there are a series of combinations of r and Y that ensure equal­ity between saving and investment. Once these combinations are plotted on the r – Y plane, we get a curve which Hicks-Hansen called the IS curve.

The IS curve shows al­ternative combinations of national income (Y) and the rate of interest (r) which equili­brate the commodity market. Mathemati­cally, the IS curve is simply the solution of equation (3.27) for r in terms of Y. 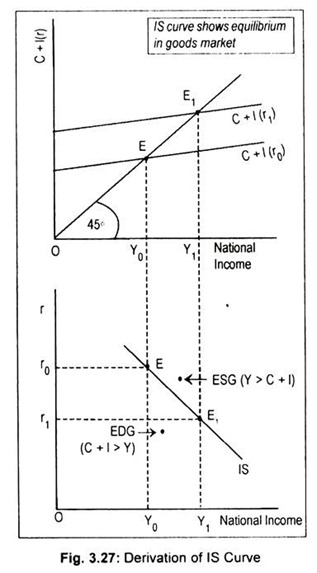 The new aggregate expenditure schedule cuts the 45° line at E1 and the corresponding level of national income rises to Y1. Thus, for the interest rate r0, a point of product market equilibrium will be Y0. This r0 – Y0 combination is one point on the IS curve, shown in the lower panel of Fig. 3.27.

Similarly, r1 interest rate produces Y1 equilibrium income. So, r1 – Y1 combination is another point on the IS curve. By joining these points (E and E1 in the lower panel) we get a curve known as the IS curve.

Alternative Method of Deriving IS Curve:

The derivation of IS curve can be made in terms of a four-part diagram (Fig. 3.28). In part (a), we have drawn investment function that shows the inverse relationship between investment and the rate of interest. Part (c) plots the saving function that represents direct relationship between income and saving. Part (b) is simply a 45° identity line, and part (d) plots the IS curve. 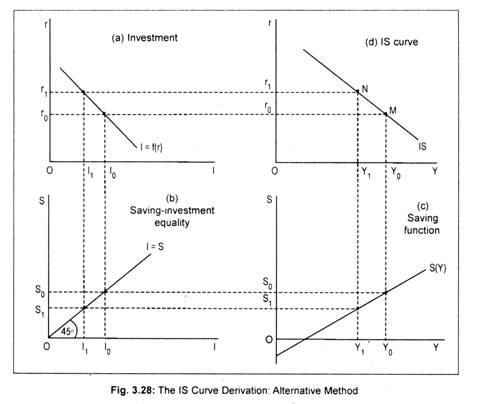 The procedure may be repeated for each level of income (interest) to obtain corresponding values of interest rate (income value) that ensures equality between saving and investment. By joining all these equilibrium points, we get an IS curve drawn in part (d).

Thus, the IS curve shows various combina­tions of income and interest rate that brings commodity market in equilibrium.

The IS curve is negatively sloped. Its slope depends on the nature of saving and investment functions.

The IS curve may shift if there is a change in autonomous consumption, private investment and government expenditure and taxes.

Properties of IS Curve: Summary:

(i) The IS curve is the equilibrium combinations of income and interest rate such that the product market or goods market is in equilibrium.

(ii) The IS curve slopes downward to the right because an increase in interest rate causes investment expenditure to decline, therefore, reduces aggregate demand and, hence, equilibrium national income.

(iii) Its slope depends on the saving and investment functions. The IS curve will be relatively steep (flat) if investment is less (more) sensitive to interest rate changes.

(iv) This IS curve will shift by an autonomous change in investment spending or government spending.

A Mathematical Example on the IS Curve:

First, consider a two-sector economy. Assume the following equations for investment and saving.

With these equations, we derive an IS schedule for a two-sector economy, given the interest rate r = 0.09 p.c. 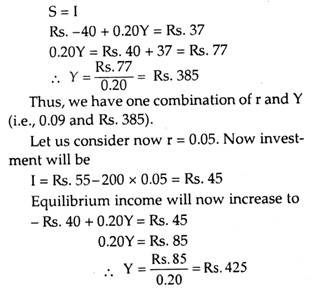 By plotting these r-Y combinations, we obtain negatively sloped IS curve.

Now, we will derive the equation for IS with the help of the following equations:

Thus, the money demand function, denoted by Md, can be expressed as:

Supply of money (M) is institutionally given. Given M , corresponding to each level of income there is a rate of interest which produces equilibrium in the money market. Money market equilibrium occurs when

The LM curve shows different combina­tions of r and Y that equilibrate money market. In Fig. 3.29 we have drawn two money demand schedules, corresponding to two different levels of income. At Y0 income, money demand schedule is given by Md (Y0). As income increases from Y0 to Y1, the money, demand curve shifts to the right. The vertical line M shows fixed money supply. 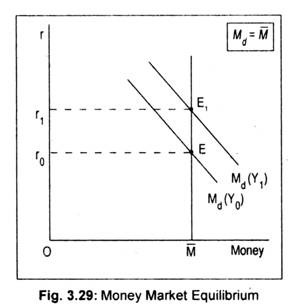 The interest-income combination at which equilibrium occurs, (r0-Y0) and (r1 – Y1), are points along the LM curve. These points are plotted in Fig. 3.30. Thus, the LM curve is the locus of all combinations of r and Y that bring money market in equilibrium. This LM curve slopes upward to the right because as interest rate rises, equilibrium income rises. 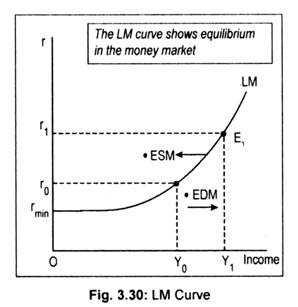 In an extreme case, if money demand is assumed to be perfectly interest-elastic (it happens at the floor rate of interest or the so- called liquidity trap region), the LM curve also becomes perfectly elastic at this region. In Fig. 3.30 the LM curve is drawn parallel to the horizontal axis at the minimum rate of interest, rmin. The LM curve becomes positively sloped above the rmin range.

A four-part diagram may be used to derive the LM curve. Fig. 3.31(a) shows a proportional relationship between money income and transaction demand for money (Mt= kPY). Part (c) represents speculative demand for money [MS = f(r)]. The schedule in (b) is an identity line that mechanically divides money supply into transaction and speculative elements. Part (d) represents the LM curve. 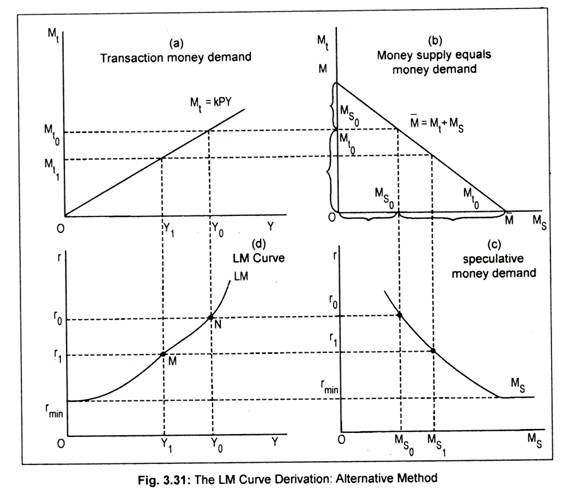 If the rate of interest declines to r1, the equilibrium level of income will be Y1. The procedure can be repeated such that equilib­rium combinations of r and Y emerge to en­sure equality in the money market. By joining all these combinations (such as, M and N), we get the LM curve drawn in part (d). Note that, at a floor interest rate, rmin, money demand becomes infinitely elastic. This makes specu­lative demand for money (shown in part c) to become horizontal at the minimum rate of in­terest. Because of this liquidity trap, the LM curve also becomes perfectly elastic. Anyway, the LM curve slopes upward from left to right.

Properties of the LM Curve: Summary:

(i) The LM curve consists of equilibrium combinations of income and interest rate for the money market.

(ii) The LM curve slopes upward to the right.

(iv) The LM curve shifts due to changes in money supply and money demand.

(v) All points on the LM curve show money market equilibrium such that there is neither excess demand money (EDM) nor excess supply of money (ESM). Any point off the LM curve exhibits either EDM or ESM.

A Mathematical Example on the LM Curve:

To derive the mathematical form of the LM equation we consider both money demand and money supply function.

Let transactions demand for money be

and speculative demand for money

Given this LM equation, we can find out the level of income if the interest rate is known.

By plotting different combinations of r and Y we obtain a positive sloping LM curve.

Find out the LM equation.