The direction in which the income effect works, cannot be deduced from any theory.

The effect of the increase of income on the consumption of goods is known from empirical evidence.

The consumption of inferior goods decreases with the rise in income, for they are replaced by the superior substitutes at higher levels of income. The goods with income effect (or income elasticity) negative have been called inferior goods, since income effect is mostly negative in case of commodities which are of physically inferior quality.

It may however be pointed out that inferior good need not be one which is of physically inferior quantity and also it is not necessary that the substitute which replaces the so called inferior goods should have any physical characteristics common with them.

Furthermore, it is not even essential that the ‘wants’ which are satisfied by the inferior good and the substitute which replaces it should be the same. Suppose an individual is induced to buy a car by a small rise in income, he will then be forced to economize on several goods which he was previously consuming.

Therefore, in case of inferior goods the income effect will work in the opposite direction to the substitution effect. But the income effect of the change in price of a good is generally quite small. This is so because a person spends no more than a small proportion of his income on a single good with the result that not even large proportional falls in the price of a good will produce a cost difference which is more than a small fraction of his income.

Thus, unless the demand for a good is exceedingly responsive to the changes in income, that is, unless the income elasticity of demand is extremely large, the income effect of the change in price must be quite small in relation to previous consumption. Therefore, in case of an inferior good although the income effect works in the opposite direction to the substitution effect, it is unlikely that it will outweigh the substitution effect.

The case of inferior goods in which inverse price-demand relationship holds good is depicted in Fig 13.13 in which good X represented on X-axis is assumed to be an inferior good. Suppose the price of good X falls so that the opportunity line shifts from position aa to bb. As before, the amount demanded of the good increases between A and α’. In other words, substitution effect leads to the increase in the consumption of good X. But, since the good X is now supposed to be an inferior good, the income effect of the price change will tend to diminish the demand.

Therefore, the amount demanded will fall between a’ and B. In other words, B will lie to the left of a’. But since the income effect is usually small and substitution effect much larger than it, position B, though lying to the left of a’, will remain to the right of A indicating that amount demanded increases as a net result of the working of substitution effect and negative income effect.

It is evident from Fig. 13.13 that when the price of an inferior good falls, its quantity demanded can rise even though the income effect is negative. Thus inverse price-demand principle will also hold in most cases of the inferior goods. 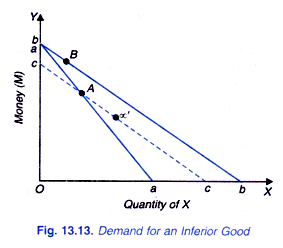 If follows from the above analysis that exception to the law of demand can occur if in the case of an inferior good the negative income effect is so large that it outweighs the substitution effect. Now, the income effect can be very large if the income elasticity of demand is very high and also the proportion of income spent on the good is quite large.

When the negative income effect overwhelms the substitution effect, the net result of the fall in price will be to diminish the amount demanded. The inferior goods for which there is direct price-demand relationship are known as Giffen goods.

Thus Giffen goods, which are exceptions to the Marshallian law of demand can occur when the following three conditions are fulfilled:

(i)The commodity must be inferior with a negative income elasticity of significant size.

(ii)The substitution effect must be small.

(iii) The proportion of income spent upon the inferior good must be large. 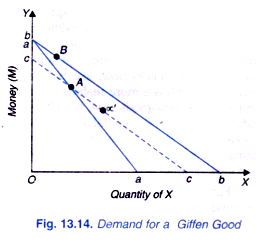 It is very unlikely that the three conditions for the Giffen good case to occur will be satisfied in the case of any ordinary good. Thus “although exceptions to the law of demand are theoretically possible the chance of their occurrence is in practice negligible.”

J R Hicks in his Revision of Demand Theory based on weak logical ordering goes deeper into the foundations of demand theory and derives in a more closely reasoned manner law of demand from a few simple and self-evident propositions of ‘logic of order. He does not follow Samuelson’s behaviouristic revealed preference approach to study consumer s behavior but instead adopts the technique of weak logical ordering on the part of consumer to establish the theorems of demand.

To establish law of demand, he takes the assumption that consumer behaves according to a scale of preferences. Thus, it is the weak logical ordering and preference hypothesis which are the hallmarks of the methodology of Hicks in his new theory of demand as distinct from indifference curve approach.

Commenting on Hicks’ Revision of Demand Theory Fritz Machlup remarks, “The methodological position underlying Hicks approach is eminently sound. He is free from positivist behaviouristic restrictions on the study of consumer s behavior and he also avoids contentions about the supposedly empirical assumptions regarding rational action. Instead he starts from a fundamental postulate, the preference hypothesis.

Besides the innovation of logic of order and preference hypothesis, J. R. Hicks also corrects some of the mistakes of indifference curve analysis, namely, continuity and maximizing behaviour on the part of the consumer. He now abandons the use of indifference curves and therefore avoids the assumption of continuity. Instead of assuming that consumer maximizes the satisfaction. Hicks now, like Samuelson, relies on consistency in the behaviour of the consumer which is a more realistic assumption.

Thus even by giving up the unrealistic assumption of indifference curve analysis, Hicks in his new logical weak ordering theory decomposes the price effect into income and substitution effects and is therefore able to account for Giffen goods which Samuelson’s revealed preference theory cannot.