Read this article to learn about the top fifteen frequently asked questions on Demand and Supply of a Commodity.

Q. 1. Why is a Product Demand Curve Negative Sloping?

Ans. For a normal, non-Giffen goods, demand curve slopes downwards from left to right because of three reasons.

First is the law of diminishing marginal utility. Second is the substitution effect, while the third reason is the income effect of price change.

Q.2. Draw an Unusual Demand Curve and Explain why you consider it an unusual.

Ans. In some unusual cases, demand curve becomes upward rising indicating a direct relationship between the price and quantity demanded. In figure 17.2, we have drawn positive sloping demand curve, DD1 for goods X. As price rises from OP1 to OP2, quantity demanded also increases from OX1 to OX2.

This may happen in cases of: 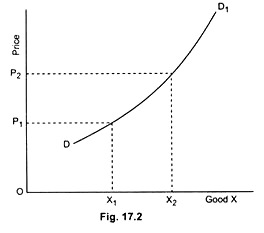 Further, Sir Robert Giffen found that the Irish people during the 19th century famine in Ireland, consumed more of potatoes when its price was higher than meat. Here, potato is a Giffen good. Again, in the share market, people buy share more (or less) when its price rises (or falls).

What is the Demand Function?

Ans. The law of demand establishes the functional relationship between the quantity demanded of a goods and its price. However, demand for any commodity depends not only on the price of that commodity, but also on other factors. So, the demand function can written as.

Ans. Change in demand refers to an increase or a decrease in demand following a change in one of the determinants of demand other than the own price. Consequently, the demand curve will shift (upward or downward).

Q.6. Point out the factors leading to a change in demand.

How does the position of a demand curve change?

Ans. Causes of change in demand are numerous.

(i) Change in income and wealth of the consumer,

(ii) Change in tastes and preferences of the consumer,

(iii) Change in the prices of substitute and complementary goods,

(iv) Change in the number of buyers,

(v) Anticipation of consumers about a future change in prices,

(vi) Change in the pattern of income distribution,

Q.9. Mention the Different Types of Elasticity of Demand.

Q. 10. Would the elasticity of demand be the same at all the points of a linear demand curve?

At which point on a downward sloping straight line demand curve the absolute value of the price elasticity is unity?

As we move upwards along the demand curve from the mid-point, elasticity of demand rises and becomes perfectly elastic at point D (i.e., EP = ∞). Further, as we move downwards along the mid-point, elasticity of demand declines (i.e., at P2 it becomes inelastic) and becomes perfectly inelastic at D1 (i.e., EP= 0). 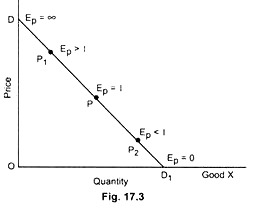 Q. 11. What will be the Shape of a Demand Curve if Coefficient of Elasticity of Demand is Unity at all of its points? 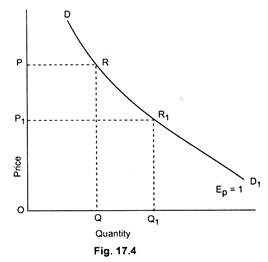 Q. 12. What will be the Coefficient of Elasticity of Demand when a Fall in Price Leads to an Increase, Decrease and no change in Total Outlay?

Ans. If the fall in price of a commodity cause consumer’s outlay to increase, the demand becomes elastic.

Secondly, if the fall in price leads to a fall in consumer’s expenditure, demand becomes inelastic.

Finally, the coefficient of elasticity of demand becomes zero when changes in price do not cause any change in total consumer’s outlay.

Q.15. Explain three important factors on which elasticity of demand for a product depends.

Ans. Whether the elasticity of demand for a product is elastic or inelastic depends on the:

(i) Nature of commodities,

(ii) Range of substitutes, and

(iii) Product consumed out of habits.

Secondly, a commodity having a large number of substitutes will be relatively elastic.

Finally, the demand for some goods (cigarette) becomes inelastic as these goods are consumed by people out of habit.

Read this article to learn about the most frequently asked questions on Basic of Demand and Supply.

If cross price elasticity of two related goods is positive, what is the relationship between the aforesaid goods?

Q.17. What will be the coefficient of income elasticity of demand in the case of (i) necessary goods, (ii) luxury goods, and (iii) inferior goods?

Q.18. What is the significance of negative income elasticity of demand?

Ans. If the income elasticity of demand for a goods is negative then such commodity is described as “inferior goods.”

Q.19. If demand is elastic how will total revenue change if price falls?

Ans. If the fall in the price of a commodity causes consumer’s total outlay to increase then demand is said to be elastic.

Q.20. (a) Suppose the price of sugar comes down from Rs. 5 per kilogram to Rs. 4 and the demand for sugar increases from 1,000 quintals to 1,500 quintals. Is it a case of elasticity of demand or a change in demand?

(b) Suppose the price of sugar does not change but the quantity demanded increases from 1,000 quintals to 1,500 quintals. Is it a case of elasticity of demand or a change in demand?

Ans. (a) It is a case of own price elasticity of demand.

(b) It is a case of change in demand since own price of sugar remains unchanged while other determinants of demand for sugar change.

Q.21. What are the determinants of supply of a commodity?

They are shown in the form of a supply function equation:

Pa.. .Pc = prices of the other goods related to X,

G = nature of the commodity, and

Q.22. What does a normal-shaped supply curve indicate?

Ans. The two forces behind the upward sloping supply curve are:

(i) The law of diminishing marginal returns, and

(ii) The profit maximisation motive of the producer.

Normally, if output is increased by employing more variable inputs, beyond a certain limit, the return from these inputs diminishes or the cost of production for using these resources increases. So, unless the price of a commodity is high, it will not be produced or supplied in greater quantity. If price increases, profit per unit increases. Naturally, larger quantities will be produced and supplied at the higher price.

Q.24. Draw an abnormal supply curve and explain why it is not normal-shaped.

Ans. Supply curve for goods which cannot be produced (e.g., paintings of a dead painter) becomes a vertical straight line. Supply curve for perishable commodities also takes this shape. Here SS curve, drawn in Fig. 17.5, is the supply curve for such commodity whose quantity remains unchanged at all prices. 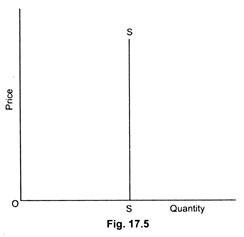 Q.26. What are the causes of change in supply?

Ans. A change in supply occurs when:

(i) Prices of related goods change, 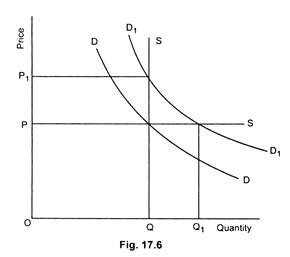 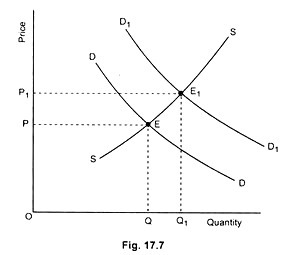 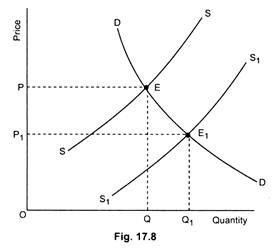 (c) If both demand and supply increase, equilibrium price may increase, decrease or remain the same.