The following article will guide you to learn how national income determines consumption and saving functions.

Many different factors, including tastes and preferences, income and inter­est rates, determine consumption. For example, if the income of one house­hold is greater than the income of another, the former is likely to consume more.

Even if their incomes are the same, however, they will spend different amounts on consumption if their attitudes toward thrift differ. Similarly, households vary their consumption in response to changes in interest rates.

Although many factors affect consumption, aggregate income in the most important by far. Consequently, we shall concentrate on the relationship between consumption and income, called the consumption function.

The consumption function is expressed as:

where C and Y represent real consumption and real income, respectively. The equation indicates that consumption is a linear function of income. In the equation, ‘a’ and ‘b’ are constants, called parameters. Consumption, C, and income, Y, are variables.

An alternative way to plot the consumption function is to recognise that ‘a’ is the intercept and b the slope. Once the intercept and slope are specified, a straight line is completely determined. For example, if ‘a’ equals 100 and b equals 0.75, the function will start at a = 100 and have a slope, b, equal to 0.75. If a changes, the consumption function will shift so that the new function is parallel to the old. If b changes, the function will change its slope. It may become flatter or steeper.

With no government and foreign trade sectors, income equals, by definition, consumption plus, saving, S:

But C is equal to a + bY. Consequently, after substituting, the saving function is found to be

The saving func­tion may be plotted in the same manner as the consumption function. To show the relationship between the consumption and saving functions, however, we may consider an alterna­tive approach. Sup­pose, in Fig. 2, income is plotted on both axes and that a 45° line is drawn through the origin. 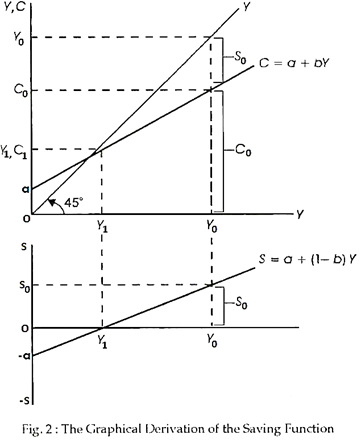 At all points on the 45° line, income on the vertical axis is equal to income on the horizontal axis. Given the 45° line and the consumption function, we can now derive the saving function graphically. Since income equals consumption plus saving, saving is the difference between income and consumption. Therefore, to find saving at each level of income, consumption is subtracted from income.

Graphically, saving is the vertical distance between the income line, the 45° line, and the consump­tion function, saving being positive (negative) when income is greater (less) than consumption. Consider income Y0 in Fig. 2. At income Y0, consumption equals C0; consequently, saving equal S0, obtained by subtracting C0 from Y0. Therefore, one point on the saving function is the point Y = Y0, S = S0.

Finally, suppose income is 0. At that level of income, consumption equals a. Hence, saving equals -a, obtained by subtracting C = a from Y = 0. Thus, a third point on the saving function is the point Y = 0, S = -a. Other such points may be obtained by considering other levels of income.

In Fig. 5, saving is positive at income levels greater than Y1, since income exceeds consumption at those levels of income. Saving is negative at income levels less than Y1 since consumption exceeds income. Negative saving, dissaving, occurs if individual households consume more than their in­come. They may do so by spending part of their savings or by borrowing. For society as a whole, dissaving is unlikely. 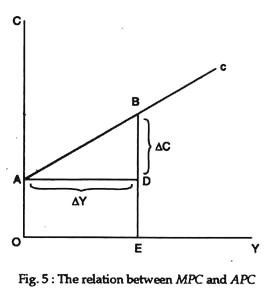