If prices remain constant year after year, then changes in nominal GNP will reflect accurately the underlying changes in production.

But prices rise or inflation occurs. Now national income may go up, even if it does not increase at all over the previous year.

This is due to the rise in prices. We have to eliminate the price change so that the figure does reflect the true measure of economic growth.

Here the term ‘real’ suggests that GNP or GDP data have been adjusted for changes in the level of prices. Suppose, in a particular year, nominal output produced is exactly the same that it produced in the last year. Let us also suppose that prices of all goods have been doubled. Then the money value of all these goods or GDP will double, even though physical output does not change.

In other words, it is possible for nominal GNP in one year to be twice that of nominal GNP in another year. Under the circumstance, GNP or GDP figure does not become reliable indicator of the growth performance of an economy. To correct this situation, economists use the concept of real GDP.

Index number of prices may be used to estimate real GNP. When GNP at current market prices is divided by the price index of base year, we obtain real GNP.

A calculation has been made in Table 2.2: 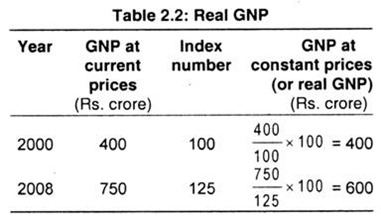 It is clear that nominal GNP usually exceeds real GNP because of inflation. Greater the difference between nominal and real GNP, greater is the inflation. It may happen that GNP data at constant prices may not be available in the economy. If so, a problem of eliminating price change from the nominal GNP will arise. The problem is solved by using GNP deflator. 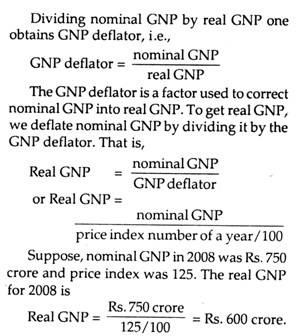