Saving Function of Income: Meaning and Relationship between Saving and Income!

Saving is that part of income which is not spent on current consumption. The relationship between saving and income is called saving function.

(i) Saving can be negative (-) at zero or low level of income and (ii) As Income increases, savings also increase but more than the increase in income

Remember, saving is residual income of households that is left after consumption.

Relationship between Income and Saving:

(ii) At lower level of income, saving is negative. In the initial stages when there is very low level of income, consumption expenditure is more than income leading to negative saving [i.e., dissaving). For instance, if income is, say, Rs 5,000 and consumption expenditure is, say 6,000, then saving will be negative, i.e., -1000 (= 5000 – 6000). It is called dissaving. Here average propensity to save is negative.

The curve slopes upward which depicts direct relationship between income and saving. The savings functions line SS cuts the income line at point B which is called Break-even point because at this point consumption expenditure is equal to income (or savings are zero). 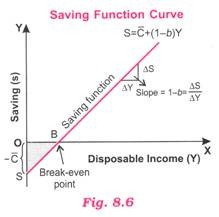