Value of output produced by an enterprise is equal to physical output (Q) produced multiplied by the market price (P), that is, P.Q. From the value added by each enterprise we subtract consumption of fixed capital (i.e., depreciation) to obtain net value added at market prices (NVAMP).

Under this method, the economy is divided into different industrial sectors such as agriculture, fishing, mining, construction, manufacturing, trade and commerce, transport, communication and other services. Then, the net value added at factor cost (NVAFC) by each productive enterprise as well as by each industry or sector is estimated.

It follows from above that in order to arrive at the net value added at factor cost by an enterprise we have to subtract the following from the value of output of an enterprise:

1. Intermediate consumption which is the value of goods such as raw materials, fuels purchased from other firms

The following precautions should be taken while measuring national income of a country through value added method:

1. Imputed rent values of self-occupied houses should be included in the value of output. Though these payments are not made to others, their values can be easily estimated from prevailing values in the market.

4. Value of services of housewives are not included because it is not easy to find out correctly the value of their services.

5. Value of intermediate goods must not be counted while measuring value added because this will amount to double counting.

Therefore, national income is calculated by adding up the rent of land, wages and salaries of employees, interest on capital, profits of entrepreneurs (including undistributed corporate profits) and incomes of self-employed people. This method of estimating national income has the great advantage of indicating the distribution of national income among different income groups such as landlords, owners of capital, workers, entrepreneurs.

1. Like the value added method, the first step in income method is also to identify the productive enterprises and then classify them into various industrial sectors such as agriculture, fishing, forestry, manufacturing, transport, trade and commerce, banking, etc.

i. Compensation of employees which includes wages and salaries, both in cash and kind, as well as employers’ contribution to social security schemes.

ii. Rent and also royalty, if any.

Profits are divided into three sub-groups:

v. Mixed income of the self-employed:

In India as in other developing countries there is fifth category of factor income which is termed as mixed income of self-employed. In India a good number of people are engaged in household industries, in family farms and other unorganised enterprises. Because of self-employment nature of the business it is difficult to separate wages for the work done by the self-employed from the surplus or profits made by them. Therefore, the incomes earned by them are mix of wages, rent, interest and profit and are, therefore, called mixed income of the self-employed.

5. By summing up the incomes paid out by all industrial sectors we will obtain domestic factor income which is also called net domestic product at factor cost (NDPFC).

6. Finally, by adding net factor income earned from abroad to domestic factor income or NDPFC we get net national product at factor cost (NNPFC) which is also called national income.

Income approach to measurement of national income is shown through bar diagrams in Figure 2.7. 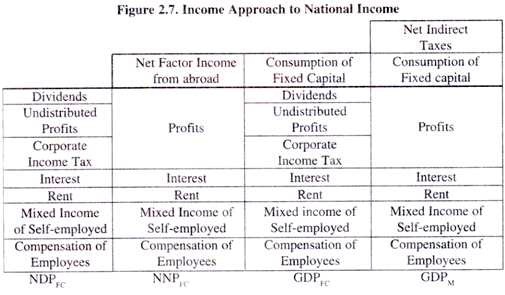 While estimating national income through income method the following precau­tions should be taken:

1. Transfer payments are not included in estimating national income through this method.

2. Imputed rent of self-occupied houses are included in national income as these houses provide services to those who occupy them and its value can be easily estimated from the market value data.

3. Illegal money such as hawala money, money earned through smuggling etc. are not included as they cannot be easily estimated.

4. Windfall gains such as prizes won, lotteries are also not included.

5. Corporate profit tax (that is, tax on income of the companies) should not be separately included as it has already been included as a part of profits.

6. Death duties, gift tax, wealth tax, tax on lotteries, etc., are paid from past savings or wealth and not from current income. Therefore, they should not be treated as a part of national income of a year.

8. Income equal to the value of production used for self-consumption should be estimated and included in the measure of national income.

Expenditure method arrives at national income by adding up all expenditures made on goods and services during a year. Income can be spent either on consumer goods or capital goods. Again, expenditure can be made by private individuals and households or by government and business enterprises.

1. Expenditure on consumer goods and services by individuals and households. This is called final private consumption expenditure, and is denoted by C.

2. Government’s expenditure on goods and services to satisfy collective wants. This is called government’s final consumption expenditure, and is denoted by G.

3. The expenditure by productive enterprises on capital goods and inventories or stocks. This is called gross domestic-capital formation, or gross domestic investment and is denoted by I or GDCF.

(ii) Addition to the stocks or inventories of goods

4. The expenditure made by foreigners on goods and services of a country exported to other countries which arc called exports and are denoted by X We deduct from exports (X) the expenditure by people, enterprises and government of a country on imports (M) of goods and services from other countries. That is, we have to estimate net exports (that is, exports -imports) or (X—M) which is also denoted by NX.

Thus, we add up the above four types of expenditure to get final expenditure on gross domestic product at market prices (GDPMP). Thus, 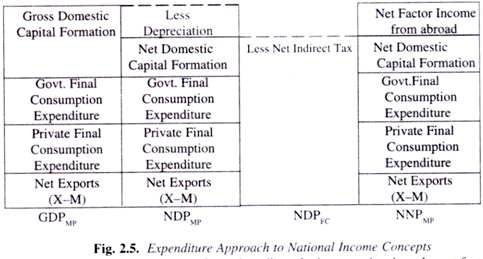 Expenditure approach to national income is shown through bar diagram in Table 2.2.

While estimating Gross Domestic Product through expenditure method or measur­ing final expenditure on Gross National Product, the following precautions should be taken:

The expenditure made on second-hand goods should not be included because this does not contribute to the current year production of goods and services.

2. Purchase of shares and bonds:

Expenditure on purchase of old shares and bonds from other people and from business enterprises should not be included while estimating Gross Domestic Product through expenditure method. This is because bonds and shares are mere financial claims and do not represent expenditure on currently produced goods and services.

3. Expenditure on transfer payments by government such as unemployment benefits, old-age pension should also not be included because no goods or productive services are produced in exchange by the recipients of these payments.

4. Expenditure on intermediate goods such as fertilisers and seeds by the farmers and wool, cotton and yarn by manufacturers of garments should also be excluded. This is because we have to avoid double counting. Therefore, for estimating Gross Domestic Product we have to include only expenditure on final goods and services.