Enunciation of the Law:

But, in the case of the law of increasing returns, the return is more than proportionate.

The law can be expressed in terms of costs too:

While discussing the law of diminishing returns, it was stated that the law operated because of the dearth or scarcity of one or more essential factors of production. Some factors cannot be increased while other factors are increased.

The result is a defective combination of factors. There are, however, some industries where all factors required are available at any moment and in any amount. Hence, whenever a combination of the factors becomes unbalanced, it can be set right. As a consequence, the law of increasing returns will operate in such industries instead of the law of diminishing returns.

“As the proportion of one factor in a combination of factors is increased, up to a point, the marginal product of the factor will increase.” The phrase ‘up to a point’ may be carefully noted- The increasing returns will be only up to a point. Later, the return may diminish. Suppose a fountain pen manufacturer invests successive doses of Rs. 1,000 each in the production of pens and the results are as given in the schedule below:

We can show the above result with the help of a diagram too (Fig. 22.4). The diagram below shows the decreasing cost shown in column 3 above. 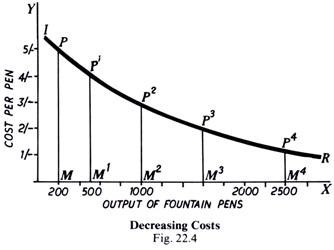 Along OX are measured the total quantity of pens manufactured, and along OY the cost of production per pen. IR is the cost curve. It is clear that, as the scale of production increases, the cost per unit falls.

Why the Law of Increasing Returns Operates in Industry:

The law of increasing returns generally applies to manufacturing industries. Here man is not hampered by nature. He goes ahead and benefits from all sorts of economies, both internal and external. We have already discussed the economies of large-scale production. They are all available to a big manu­facturer. As he increases the scale, production becomes more and more economical. The cost of production falls, which means an increasing return.

Why does me law operate in big manufacturing industries?

There are several reasons on account of which the law of increasing returns operates in manufactures:

(i) There is a large scope for the introduction of machinery. What is more important is that it can be kept continuously at work. The result is that capital costs per unit of output are less.

(ii) There is ample scope for the use of specialised labour. The result is a large output, which means lowering of costs. This means increasing returns.

(iii) The manufacturing industries, being generally on a large scale, are able to realise economies of scale, both internal and external. These economies relate to buying and selling, economy in administration, publicity and salesman­ship, benefit of research and experiments, financial, technical and managerial economies, etc.

(iv) Unlike agriculture, interruptions in work from natural disturbances, like changes in weather and seasons, are on a minor scale. Hence there are no costly breakdowns. Production is smooth and economical, which means increasing returns.

(v) The operations are carried on within a small area so that supervision is easy and effective. There is little waste of materials and spoiling of machinery. Expert guidance and advice are always at hand. Hence production is carried on economically.

It is on account of all these reasons that the law of increasing returns operates in industry. But the business cannot go on expanding itself indefinitely. There comes a time when economies change into diseconomies as the business becomes unwieldy.