The following points highlight the top fourteen peculiarities of labour. The pecularities are: 1. Labour market transactions are particularly significant for the indi­vidual worker 2. Labour is an end and means in itself 3. The individual sells his services but not himself 4. Labour is inseparable from the labourer and a few others.

Much of a person’s lifestyle and relations with other people depend on the job he (or she) does. Furthermore, the employment of labour involves a continuing personal relationship between employers and em­ployees, whereas transactions in market for goods are often brief and impersonal.

Peculiarity # 2. Labour is an end and means in itself:

A commodity is only a means of production and the object of production is its consumption by labour. Labour, therefore, becomes a means to its own end.

Peculiarity # 3. The individual sells his services but not himself:

The employer, however, must be able to exert some control or authority over the actions of employees. This is not a very simple matter, which can be covered unambiguously by a contract of employment.

A great deal of energy has been devoted to planning systems for the direction of employees, and even a brief examination of the state of industrial relations in most countries shows that still much remains to be done. If the service of labour is required, the worker must himself (herself) go to the workplace and provide labour service.

Peculiarity # 4. Labour is inseparable from the labourer:

For example, a person who has agreed to carry out certain tasks cannot ‘transfer’ his services to someone else to do the work, while he does something else. This contrasts with commodities which can be transferred among individu­als.

One consequence of having to ‘deliver’ the services personally is that employees have strong views on how their services should be used. Work­ing conditions are of central importance to workers. It also means that workers must live near their place of work. So, location may significantly affect labour market decisions.

Labour cannot be ‘saved’ or stored for future use (although some rest may enhance performance to some extent).

A commodity, if not disposed off today, can be disposed off the next day and it may not lose its value. Labour, however, is perishable in this that if the labourer is not able to sell his services for a day, he cannot get the value for that day. It is lost forever. And it is because of this that labour has a weak bargaining power. So, labour is a perishable factor. It cannot be stored. A worker who does not work or get work in a day loses the time of that day and cannot ever get it back.

Peculiarity # 8. Labour is affected by surroundings:

Labour being inseparable from labourer, the supply of labour depends not only on wages or price of labour but on various non-monetary (psychological) factors, such as conditions of work, treatment by employers, health and safety measures taken by em­ployers inside the workplace, and so on.

In case of most commodities we see that supply usually varies with demand, but in case of labour its supply is in no way related to demand. Both are determined by different factors.

Like land, labour is also not homogeneous. Labour is of different types: unskilled, semi-skilled or skilled. The quality of labour demanded for same kind of job differs from labourer to labourer and even from time to time for the same labourer.

Skill acquisition is often a lengthy and costly process. However, adjustments in the labour market, such as increasing the supply of a particular skill, often requires a long time. This also means that individuals do not usually train for more than one occupation as they only have a limited working life over which to justify the investment.

Labour is normally in a weak bargaining position. Two primary reasons for this are: lack of organisation among workers and Perishability of labour as a factor. 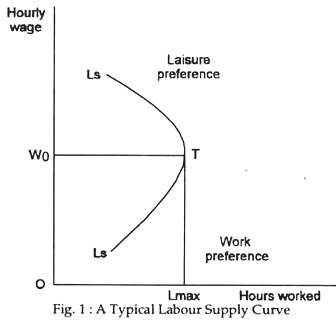 Cost of Production | Economics
How to Find Income Elasticity of Demand from Engel Curves?