An important application of indifference curves is to explain the mutual exchange between two individuals of two goods possessed by each.

When the two individuals have to exchange two things, the case is one of bilateral monopoly. 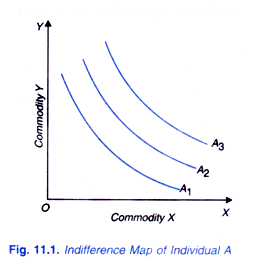 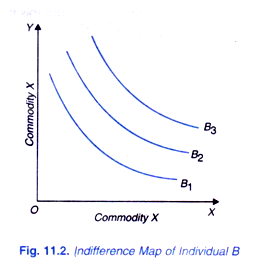 Likewise in Figure 11.2 indifference-map of individual B depicting his scale of preferences between the two goods X and Vis drawn. Now, the exchange problem between the two individuals and its resultant welfare implications can be analysed with the help of Edgeworth Box diagram which has been named after its inventor Y. F. Edgeworth who first of all discussed this exchange problem. 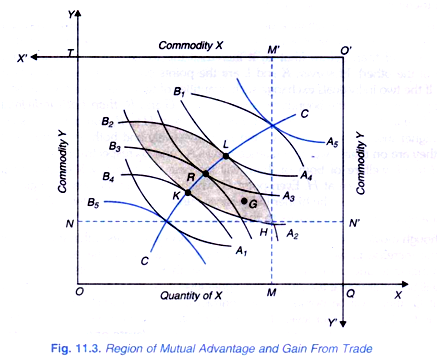 Since the initial distribution of two goods is that individual A has OM of good X and ON of good Y and individual B has O’ M’ of X and O’N’ of Y, the two will be at point H in the Edgeworth Box. Now, every point within or on the boundaries of the shaded area represents a possible act of exchange to the mutual advantage of both individuals because it leaves them either at their initial indifference curves A3 or B3, respectively as the case may be and possibly on the higher indifference curves of both of them.

It is thus clear that exchange of goods between the two individuals involved in moving from point H to either L or K is to their advantage; it makes one better off without making other worse off than before (that is, it increases the welfare of one without reducing the welfare of the other). However, K and L are the points on the boundary lines of the shaded region. If the two individuals exchange such quantities of two goods that they move from point H to any point within the boundaries such as point G and R, then both then both individuals will be better off than before.

Though moving from point H to a point such as G which lies within the boundaries would mean the increase in welfare of both individuals, but it will not be equilibrium point, since corresponding to any point off the contract curve, there will be points on the contract curve which will be better than it (i.e., will mean higher level of welfare for both).

But the changes in aggregate social welfare cannot be assessed when the contemplated move is from one point of the contract curve to another on it, unless we are willing to make interpersonal comparison of utility. To conclude, “An unwillingness to make interpersonal comparison of utility means that the only changes that can be evaluated are those that make everyone better off or that makes at least one person better off without anyone else worse off. An improvement in some people’s welfare at someone else’s expense cannot be judged in quantitative utility terms. A movement toward the contract curve always represents an unambiguous improvement of aggregate welfare but a movement along the contract curve alters the distribution of aggregate welfare among the participants in the market.”

It is now clear from above that with the help of indifference curves why the exchange or trade between the two individuals will take place and what gain from this exchange or trading of goods they will obtain in terms of increment in their welfare can be ascertained. Further, indifference curve analysis clearly brings out that it is to the advantage of both individuals to exchange goods between themselves.