An important application of indifference curves is to analyse with its aid the effect of subsidies to the consumers. Several kinds of subsidies are paid to the individuals these days by the Government for promoting social welfare.

Let us take the case of food subsidy which is given by the Government to help the needy families.

Suppose that under food-subsidy programme, the needed families are entitled to purchase food at half the market price, the other half of the market price is paid by the Government as subsidy.

The effect of this subsidy on consumer’s welfare and money value of this subsidy to the consumer is illustrated in Figure 11.4 where the quantity of food is measured on the X-axis and money on the Y-axis. Let us suppose that the individual has OP money income. Given this money income and given the market price of food, the budget line is PL1. Since we are assuming that subsidy paid by the Government is half the market price of food, the consumer would pay half the market price. Therefore, with subsidy the individual will face the budget line PL2 where OL1 = L1L2.

It will be seen from Figure 11.4 that budget line EF touches the indifference curve IC at a point S and is buying OB quantity of food. This means that if individual is paid PE amount of money (say as a cash grant), he reaches the same indifference curve IC (same level of welfare) at which he is when subsidy is paid by the Government. Thus PE, is money value of the subsidy to the individual. It will be seen from Figure 11.4 than PE is less than RM which is the amount of money paid by the Government as subsidy. In our Figure, PE = MK (the vertical distance between two parallel lines) and KM is greater than MK. 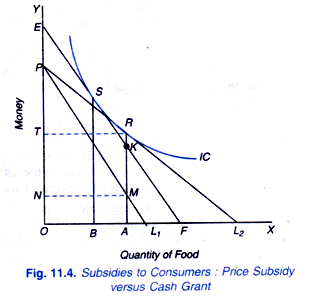 Therefore, RM is also greater than PE. It follows that PE is less than RM. If instead of giving RM as price subsidy on food. Government pays the individual cash money equal to PE, the individual will reach the same level of welfare as he does with RM subsidy.

If the Government provides the consumer lump-sum cash grant of RM instead of price subsidy on food, this will amount to increasing the money income of the consumer by RM amount. With this extra cash transfer equal to RM (= PC), the budget line will shift to the right to the position CD and pass through point R. It will be seen from Figure 11.5 that with the budget line CD though the individual can buy the same market basket R, if he so desires, which he was purchasing with price subsidy on food, he is actually in equilibrium at point Hon higher indifference curve IC2. 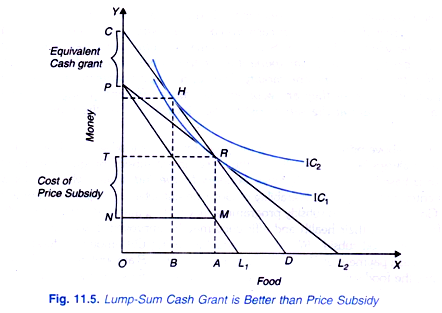 That the individual with cash transfer must be better off and his food consumption must be less as compared to price subsidy on food is due to the fact that indifference curves being convex, the budget line CD obtained with cash transfer must intersect the indifference curve IC1 at point R reached with equivalent price subsidy.

Therefore, given that the consumer is free to spend money as he likes, with cash grant his new equilibrium position must be to the left of point R on the budget line CD where it will be tangent to the higher indifference curve than IC1. This implies that in case of lump-sum cash transfer, the consumer will be better off and consume less food relative to the equilibrium position under price subsidy on food.

The superiority of cash grant in terms of its impact on the welfare of the individualscan be explained in a slightly different way. Though both the lump-sum cash transfer and price subsidy on a commodity produces income effect making the individual better off, under cash grant, the individual is free to buy different goods according to b is own tastes and preferences which ensures higher level of welfare as compared to the policy of price subsidy on food which imposes a certain pattern of consumption favouring food.

Besides, a lower price of food due to price subsidy on it induces the consumer to substitute food for other goods causing greater consumption of food as compared to the scheme of lump-sum cash grant which have no such substitution effect and permits free choice of goods to the individual according to his own preference. Thus, to quote Watson again “you can make someone happier if you give him cash instead of a commodity, even if something he wants.”

Likewise, Scitovsky remarks, “one can make a man happier by giving him cash and letting him spend it as he thinks best than by giving him to take all his relief in the form of one commodity. Hence, relief payments in cash are preferable to a food subsidy because they are economically more efficient, giving the relief receipts either a greater gain at the same cost to the Government or the same gain at a lower cost.”