The basic tool of Hicks-Allen ordinal utility analysis of demand is the indifference curve which represents all those combinations of goods which give same satisfaction to the consumer.

Since all the combinations on an indifference curve give equal satisfaction to the consumer he will be indifferent between them, that is, it will not matter to him which one he gets.

Now, the consumer is asked to tell how much of good Y he will be willing to give up for the gain of an additional unit of X so that his level of satisfaction remains the same If the gain of one unit of X compensates him fully for the loss of 4 units of Y, then the next combination of 2 units of X and 8 units of Y (2X + 8Y) will give him as much satisfaction as the initial combination (1X + 12 Y).

In schedule II, the consumer has initially 2 units of X and 14 units of Y. By asking the consumer how much of Y he will be prepared to abandon for the successive additions of X in his stock so that his satisfaction remains equal to what he derives from the initial combination (2X+14Y) we get combinations 3X+ 10Y, 4X + 7Y, 5X+ 5Y and 6X+ 47. Thus, each of the combinations in schedule II will be equally desirable to the consumer and he will be indifferent among them. 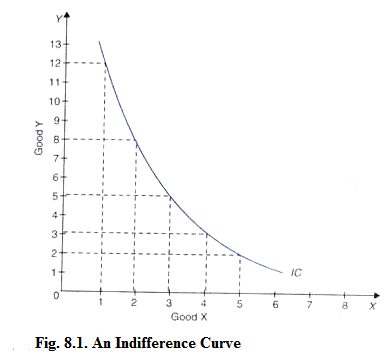 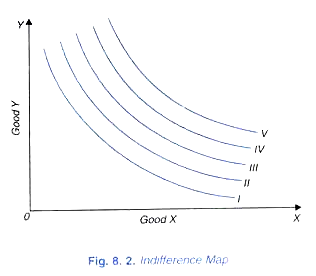 It is not possible for the consumer to specify ‘quantitative differences in his various levels of satisfaction (i.e., by how much more or by how much less cannot be stated by him). Therefore, in an indifference map successively higher indifference curves can be denoted by any ascending series, 1,3,7, 9…; or 1, 4, 6, 8, 13…; or 1 2 5 8 10…; etc., the magnitude of these various numbers and the quantitative differences among them having no relevance. It is more usual to label the indifference curves by ordinal numbers as I, II, III, IV, V as is done in Fig. 8.2.

If the consumer s tastes and preferences undergo a change, then a new indifference map corresponding to new tastes and preferences will have to be drawn. If, for instance good Y is eggs and good X is bread, and if the doctor advises our consumer to take more of eggs to overcome some diseases, the shapes of all his indifference curves will change and his indifference map will have to be redrawn. Since the doctor’s advice will intensify our consumer’s desire for eggs, now a smaller quantity of eggs than before will be given up by him for a given increment in bread.