It is useful to know what economists mean by the demand for the goods by consumers.

The demand for a commodity is consumer’s desire to have it for which he is willing and able to pay Demand for a good is in fact a photographic picture of consumers attitude towards a commodity.

This time period may be a week, a month, a year or any other given time period. The demand in economics implies both the desire to purchase and the ability to pay for a good. It is noteworthy that mere desire for a commodity does not constitute demand for it, if it is not backed by the ability to pay. For example, if a poor man who hardly makes both ends meet, wishes to have a car, his wish or desire for a car will not constitute the demand for the car because he cannot afford to pay for it, that is, he has no purchasing power to make his wish or desire effective in the market.

Thus, in economics unless demand is backed by purchasing power or ability to pay it does not constitute demand. Demand for a good is determined by several factors such as price of a commodity, the tastes and desires of the consumer for a commodity, income of the consumer the prices of related goods, substitutes or complements.

People demand goods because they satisfy the wants of the people. The utility means the amount of satisfaction which an individual derives from consuming a commodity. It is also defined as want-satisfying power of a commodity. Utility of a good is the important determinant of demand of a consumer for the good.

It is assumed that Individuals will try to maximise their utility or satisfaction from the goods they buy for consumption Consumers’ demand for consumer goods for their own satisfaction is called direct demand Utility is a subjective entity and resides in the minds of men. Being subjective, it varies with different persons, that is, different persons derive different amounts of utility from a given good. People know utility of goods by means of introspection.

The desire for a commodity by a person depends upon the utility he expects to obtain from it. The greater the utility he expects from a commodity, the greater his desire for that commodity. It should be noted that no question of ethics or morality is involved in the use of the word, utility’ in economics. Thus desire to consume alcohol may be considered immoral by some religious people but no such meaning is attached to it in economics.

Thus, in economics the concept of utility is ethically neutral. Further a commodity may not be useful in the ordinary sense of the term, even then it may provide utility to some people. For instance alcohol and cigarettes may actually harm persons but it possesses utility for those whose want they satisfy.

Consumer’s choice of goods he buys is a difficult task in the modern economic system as thousands of goods and services are available in the market. But the quantities of goods consumers buy are constrained by their income or budget. Who would not like to ‘buy City Honda Car, dine at Taj Hotel and live in a good bungalow in South Delhi. It is income which constrains consumers to buy goods they might want. Thus consumers face con­strained optimisation problem.

Market demand for a good is the total sum of the demands of all individual consumers who purchase the commodity at various prices in the market in a period.

This means that quantity demanded is measured as an amount that consumers wish to buy per unit of time, which may be a day, a week a month or a year. Thus if you consume 5 cups of tea in a day, then your quantity demanded of tea is expressed as 5 cups per day or 35 cups per week or 150 cups per month and so on. Without specifying the time period, it is not possible to say whether the quantity demanded is large or small.

The demand function for a commodity describes the relationship between the quantity demanded of it and the factors that influence it. Individual’s demand for a commodity depends on its own price, his income, prices of related commodities (which may be either substitutes or complements), his tastes and preferences, and advertising expenditure made by the producers for the commodity in question.

Individual demand function for a commodity can be expressed in the following general form:

Where Px = Own price of the commodity X

I = Income of the individual

T = Tastes and preferences of the individual consumer

A = Advertising expenditure made by the producers of the commodity.

For many purposes in economics, it is useful to focus on the relationship between quantity demanded of a good and its own price while keeping other determining factor such as consumer’s income, prices of other goods, his tastes and preferences constant. With this we write the demand function of an individual in the following way.

Where a is a constant intercept term on the X- axis and b is the coefficient showing the slope of the demand curve. The coefficient of price (P) that is, (P) being negative implies that there is a negative relationship between price and quantity demanded of a commodity.

The above demand equation (4) is interpreted as one rupee fall in price of sugar will cause its quantity demanded to increase by 5 units of sugar and vice versa. It is this demand function that we have plotted on a graph and shown in Figure 6.1. 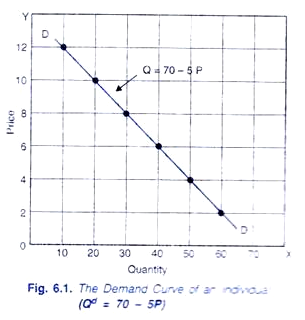 The demand function expressed in equation (1) above is of a general form and merely states the factors or variables that affect demand for a commodity. But to be useful for a manager of a firm in his decision making a demand function must be stated in explicit form which should show the precise effect on demand of changes in various individual variables. To illustrate an important form of a demand function that is generally used is the following linear form.

In the demand function (5), coefficient b1, b2, b3, b4 etc. shows the changes in quantity demanded of the commodity caused by one-unit change in the associated variables such as P, I T, price P1 of a substitute, and price P2 of a complement and so on. Thus, if price of a product X is measured in rupees, the value of b will indicate the amount or quantity demanded of the commodity X resulting from a unit change in its price (Px).

For example, if b1 = -5, then a fall in price of the commodity by one rupee will cause 5 units increase in the quantity demanded of the commodity. If we know the values of coefficients of various variables of the demand function for a commodity we can accurately predict the demand for that commodity in the next year or in some other future years.