Get the answer of: What is Oligopoly?

Oligopoly refers to a market situation or a type of market organisational in which a few firms control the supply of a commodity. The competing firms are few in number but each one is large enough so as to be able to control the total industry output and a moderate. However, increase of its output or sales will reduce the sales of rival firms by a noticeable amount.

This is surely the case if three to six or even ten firms control an industry’s output, with each controlling enough to exert influence on price. Oligopoly is the most prevalent form of market organisation in the manu­facturing sector at modern times and arises due to various reasons (such as, economies of scale, patents and trademarks, control over the sources of raw materials, government’s sanction, need of a large capital, and so on). The chief characteristic of oligopoly is the interdependence among the rival sellers.

Oligopoly is of two types:

Here, the oligopolists sell practically homogeneous products. This type is found in steel, copper, cement petrol and a few other industries.

In such a case a few firms sell similar but not identical products under the same conditions. It is found in automobiles, tyres, electrical appliances, cigarettes, baby food and a few other industries.

Problems of Price Determination under Oligopoly:

In an oligopoly market the determination of price and output by a firm creates problems. The main problem arises in the construction of a stable and a certain demand curve for the product of an oligopolist. This point may be explained further.

The Nature of the Demand Curve Facing an Oligopolist Seller:

In oligopoly, the dominant feature of the individual seller’s demand curve or average revenue curve is that it is at least potentially uncertain. It happens so because his own output adjustment will induce significant effects on his rival firms’ prices or output levels which are not uniquely predictable.

Such an interdependence among the rival produces is the key feature in an oligopoly market. Each seller controls enough of the industry output so that a moderate change in his output will tend to bring about changes in his rivals’ prices and output levels sufficient to affect his own sales. These changes are not uniquely predictable.

An oligopolist cannot set any price for its product independent. It is so because there is interdependence among the oligopolistic firms. The most important aspect of oligopoly market is reaction of rival films. A firm has to take into consideration the readiness of rival firms before taking any decision on pricing or even advertising. However, rivals’ reactions cannot be predicted with accuracy.

This introduces an element of uncertainty in oligopoly markets. Since rivals’ reactions to an individual’s firm’s actions are uncertain it is difficult to estimate the total demand for the product of an oligopolist. Audit is still more difficult to arrive at an estimate of an individual firm’s share in industry output (sales).

For exam­ple, it is easy to determine the total demand for electricity or wheat. But is it that easy to estimate the demand for cars, or the share of Hindustan motors in the car market? Just to eliminate oligopolistic uncertainty and to oligopoly behaviour economists make use of models. And oligopoly litterateur is hill of models.

Some of the major models are:

(i) The Cournot (duopoly) Model,

(a) Price leadership is “the form of imperfect collusion in which the firms in an oligopolistic industry tacitly (i.e., without formal agreement) decide to set the same price as the leader for the industry”. The price-leader may be the lowest cost firm, or which is more likely, the dominant or largest firm in the industry. In the latter case, the dominant firm sets the price, allows the other firms belonging to the industry to sell all they want at that price, and then the dominant firm enters the market to meet the residual element.

Paul Sweezy has developed his model on the basis of the kinked demand curve. This model tries to explain the price-rigidity often observed in oligopolistic markets.

The oligopoly situation (as also the duopoly situation) has one feature which has drawn the attention of economists. This is the interde­pendence in the decision making of the few dominant firms and this interdependence is recognised by all of them.

In an industry which consists of a small number of big companies or dominant firms, if one of them opens a tremendous advertising campaign or designs a new model of his product which captures the market, he can be fairly sure that this will lead to reactions and countermoves on the part of his rival producers. Every businessperson in such a situation knows that at least some of his rivals’ decisions depend on his own behaviour, and he must take this fact into account in his own decision making.

The reason for this interdependence in decision making is, of course, simple enough — a major policy change on the part of one firm is likely to have obvious and immediate effects on the other companies which belong to the industry. As a result the oligopolist develops various aggressive and defensive marketing weapons.

For example, it is only under oligopoly that advertising assumes full significance. Under oligopoly, advertising can become a life-and-death question, where a firm which fails to keep up with the advertising budget of its competitors may find its customers switching to rival products.

Oligopolistic interdependence has another consequence which is more significant for the economic literature than for the operation of the economy. This feature of oligopoly has made the formulation of a systematic analysis of oligopoly virtually impossible. Under the circumstances a very wide variety of behavioural patterns seems possible.

Rivals may decide to join hands and cooperate to fulfil their objectives; at least so far as the law permits, or at the other extreme, they may try to fight each other out. Even if they enter into an agreement it may last for sometimes or it may break down quickly. And the agreements may follow a wide variety of patterns.

As a result oligopoly theory is full of different models. A model shows the interrelationship among a few economic variables (such as price, adver­tising expenditure, sales volume, etc.) in a systematic manner. It is, of course an abstraction. Economists make models just to keep the analysis simple and manageable.

There are several oligopoly models which have attracted attention of econo­mists. First, there is the kinked (kinky) demand curve model of Paul Sweezy. It is not designed to deal with oligopolistic price and output determination. Rather, it seeks to explain why, once a price-quantity combination has been arrived at, it is not changed frequently.

Most oligopolistic industries are characterised by a feature:

Price cuts are matched by price cuts but price increases are not. This has been the case with U.S. steel and aluminium industries. In fact, prices in many oligopolistic industries appear to have exhibited a remarkable degree of stability, particularly in their resistance to change in the downward di­rection. The kinked demand curve model provides one possible explanation of the ‘stickiness’ or rigidity (in­flexibility) or rigidly (inflexi­bility) of oligopoly prices.

In that case the company may expect to increase its sale only marginally, but since it is not likely to get any customers away from its rivals in these circumstances, no large addition to its sales is to be expected. Its demand curve (DD’ in Fig. 4) will be relatively inelastic.

Now, we may suppose, on the other hand, that the company alone reduces its price. In that case a much larger increase in its demand may be expected. Thus, where no one else raises its price the firm is likely to have a relatively elastic demand curve like dd’.

Sweezy argued that the large oligopolistic firm is likely to anticipate the following competitive reaction pattern to a price change:

If the oligopoly, in our example, reduces its price, competitors will lose their customers quickly and so they will be forced to match this price cut. This implies that for downward price movements from point C, the relevant portion of this firm’s demand curve will be segment CD’ of the inelastic demand curve DD’.

If an oligopolist raises its price. No other firm will raise its price. Rather the rivals will feel happy as they will be able to attract new customers who will gain from lower price. So, rivals will have no motiva­tion or desire to match the price rise. Hence, for price rise the relevant part of the oligopolists demand curve will be the elastic segment dC.

In short, given this view of competitive reaction patterns the oligopolist’s demand curve will be the combined demand curve dCD’ characterised by a kink (a sharp corner) at the point C, which represents the current price- output combination.

Now it is quite clear that an oligopolist with such a competitive response pattern will be extremely reluctant to change its price. For a fall in its price will yield no large increase in sales revenue, while a price increase will result in a substantial fall in market share and sales turnover and neither of these is desirable.

Since demand is inelastic price cut leads to a fall in revenue. As all the rival firms reduce their prices by the same percentage, no one can gain at the expense of others. However, price out brings new consumers into the market and sales level goes up from 1100 units.

Thus neither price cut nor price in­crease is desirable in oligopoly, be­cause in each case the acting firm (the firm which reduces or rises looses). Thus oligopoly is charac­terised by rigid or inflexible prices. Such prices are inflexible both up­ward and downward. Even a shift of the marginal cost curve in the vertical segment of the kinked de­mand curve will have no effect on price. 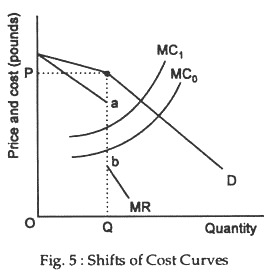 Such prices are not market prices and thus not determined by demand and supply but are administered or managed by the firms themselves either through leader-follow relationship or some sort of collusion overt or covert. A firm may try a price cut or a price increase, on an experimental basis, just to discover that at the end of the journey all firms are in the same boat.

The greatest gap in the Sweezy model is that it fails to explain why the kink occurs at a particular price (OP). It merely explains how a kink occurs at a given price. In other words, the model fails to explain how the price (at which the demand curve is kinked) is set in the first instance. Secondly, empirically it has been found that in some industries price increases by one firm were followed by others and in some others a price decrease was not followed.

Thirdly, the kinked demand curve is said to be subjective — it is what the firm thinks. Its actual demand curve may be something different. Fourthly, the model rules out the possibility of price and output fluctuations due to cost changes. This is not supported by empirical evidence. In practice, we observe that cost changes lead to output and price changes.

In the opinion of P. A. Samuelson:

The idea of a kinked demand curve was first developed in the 1939 and it has had continuing appeal as a way of explaining why oligopoly prices are stable, and, in particular, why they often remain stable during recessions when demand declines.