Under oligopoly, prices and output are indeterminate. Moreover, organizations are mutually dependent on each other in setting the pricing policy.

Therefore, economists found it extremely difficult to propound any specific theory for price and output determination under oligopoly.

In the words of Maurice, “there is no theory of oligopoly in the sense that there is a theory of perfect competition or of monopoly. There is no unique general solution but merely many different behavioral models, each of which reaches a different solution.” Thus, the economists have developed various analytical models based on different behavioral assumptions for determining price and output under oligopoly.

Let us discuss different oligopoly models (as shown in Figure-1).

This implies that an oligopolistic market is characterized by a certain degree of price rigidity or stability, especially when there is a change in prices in downward direction. For example, if an organization under oligopoly reduces price of products, the competitor organizations would also follow it and neutralize the expected gain from the price reduction.

A kinked demand curve represents the behavior pattern of oligopolistic organizations in which rival organizations lower down the prices to secure their market share, but restrict an increase in the prices.

Following are the assumption of a kinked demand curve:

i. Assumes that if one oligopolistic organization reduces the prices, then other organizations would also cut their prices

ii. Assumes that if one oligopolistic organization increases the prices, then other organizations would not follow increase in prices

iii. Assumes that there is always a prevailing price

A kinked demand curve model is explained with the help of Figure-2: 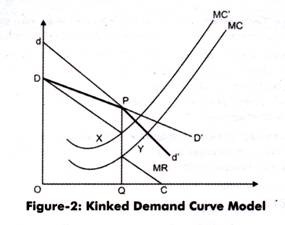 This would result in producing the kinked demand curve. On the other hand, if the oligopolistic organization reduces the price, the rival organizations would also reduce prices for securing their customers. Here, the relevant demand curve is Pd’. The two parts of the demand curve are DP and Pd’, which is DPd’ with a kink at point P.

Let us draw the MR curve of the oligopolistic organization. The MR curve would take the discontinuous shape, which is DXYC, where DX and YC correspond directly to DP and Pd’ segments of the kinked demand curve. The equilibrium point is attained when MR = MC. In Figure-2, the MC curve intersects MR at point Y where at output OQ.

However, kinked demand curve model is criticized by various economists.

Some of the major points of criticism are as follows:

i. Lays emphasis on price rigidity, but does not explain price itself.

ii. Assumes that rival organizations only follow price decrease, which does not hold true empirically.

iv. Ignores the application of price leadership and cartels, which account for larger share of the oligopolistic market.

In oligopolistic market situations, organizations are indulged in high competition with each other, which may lead to price wars. For avoiding such type of problems, organizations enter into an agreement regarding uniform price-output policy. This agreement is known as collusion, which is opposite to competition. Under collusion, organizations are involved in collaboration with each other to take combined actions for keeping their bargaining power stronger against consumers.

Some of the popular definitions of collusion are as follows:

According to Samuelson, “Collusion denotes a situation in which two or more firms jointly set that prices or output, divide the market among them, or make other business decisions.”

In the words of Thomas J. Webster, “Collusion represents a formal agreement among firms in an oligopolistic industry to restrict competition to increase industry profits.”

Some of the benefits of collusion are as follows:

i. Helps organizations to increase their performance

iii. Provides opportunities to prevent the entry of new organizations

The agreement of collusion formed may be tacit or formal in nature. A formal agreement formed among competing organizations is known as cartel. In other words, cartel can be defined as a group of organizations that together make pricing and output decisions.

Some of the management experts have defined cartel in the following ways:

According to Leftwitch, “the firms jointly establish a cartel organization to make price and output decisions, to establish production quotas for each firm, and to supervise market activities of the firms in the industry.”

According to Khemani and Shapiro, “Cartels are productive structures involving multiple producers acting in unison that allow producers to exercise monopoly power.”

In the words of Boyce and Melvin, “A cartel is an organization of independent firms, whose purpose is to control and limit production and maintain or increase prices and profits.”

According to Webster, “A cartel is a formal agreement among firms in an oligopolistic industry to allocate market share and/or industry profit.”

Under cartels, the price and output determination is done by the common administrative authority, which aims at equal profit distribution among all member organizations under cartel. The total profits are distributed in proportion as decided among member organizations. The most famous example of cartel is Organization of the Petroleum Exporting Countries (OPEC), which has shared control of petroleum markets.

Let us understand price and output decisions under cartels with the help of an example. Assume that there are two organizations that have formed a cartel.

The price and output decisions of these two organizations are shown in Figure-3:

Price Leadership under Oligopoly (With Diagram)
4 Economic Effects of Oligopoly