Let us learn about Non-Collusive and Collusive Oligopoly.

The kink in the demand curve stems from the asymmetric behavioural pattern of sellers. If a seller increases the price of his product, the rival sellers will not follow him so that the first seller loses a considerable amount of sales. In other words, every price increase will go unnoticed by rivals.

On the other hand, if one firm reduces the price of its product other firms will follow the first firm so that they must not lose customers. In other words, every price will be matched by an equivalent price cut. As a result, the benefit of price cut by the first firm will be inconsiderable. As a result of this behavioural pattern, the demand curve will be kinked at the ruling market price.

Suppose, the prevailing price of an oligopoly product in the market is QE or OP of Fig. 5.19. If one seller increases the price above OP, rival sellers will keep the prices of their products at OP. As a result of high price charged by the firm, buyers will shift to products of other sellers who have kept their prices at the old level. Consequently, sales of the first seller will drop considerably. 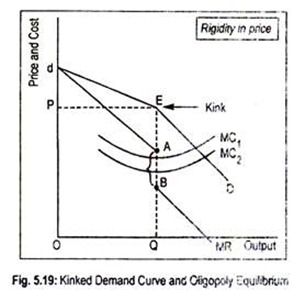 That is why demand curve in this zone (dE) is relatively elastic. On the other hand, if a seller reduces the price of his product below QE, others will follow him so that demand for their products does not decline. Thus, demand curve in this region (i.e., ED) is relatively inelastic. This behavioural pattern thus explains why prices are inflexible in the oligopoly market — even if demand and costs change.

The kink in the demand curve at point E results in a discontinuous MR curve.

The MR curve has two segments :

Equilibrium is achieved when MC curve passes through the discontinuous portion of the MR curve. Thus the equilibrium output is OQ, to be sold at a price OP.

Suppose, costs rise. As a result, MC curve will shift up from MC1 to MC2. The resulting price and output remain unchanged at OP and OQ, respectively. This fact explains stickiness of prices. In other words, in oligopolistic industries price is more stable than costs.

In this sense, it is not a theory of pricing. Secondly, price rigidity conclusion is not always tenable. Empirical evidence suggests that higher costs force a further price rise above the kink. Despite these limitations, the model is popular among textbook authors.

Non-collusive oligopoly model (Sweezy’s model) presented in the earlier section is based on the assumption that oligopoly firms act independently even though firms are interdependent in the market. A vigorous price competition may result in uncertainty.

The question that arises now is: how do oligopoly firms remove uncertainty? In fact, firms enter into pricing agreements with each other instead of adopting competition or price war with each other. Such agreement—both explicitly (or formal) and implicit (or informal)—may be called collusion.

Always, every firm has the inclination to achieve more strength and power over the rival firms. As a result, in the oligopolist industry, one finds the emergence of a few powerful competitors who cannot be eliminated easily by other powerful firms.

Under the circumstance, some of these firms act together or collude with each other to reap maximum advantage. In fact, in oligopolist industry, there is a natural tendency for collusion. The most important forms of collusion are: price leadership cartel and merger and acquisition.

An example of dominant firm price leadership is shown in Fig. 5.20 where DT is the industry demand curve. Since small firms follow the leader—the dominant firm—they behave as “price-takers”. MCs is the horizontal summation of the MC curves of all small firms. 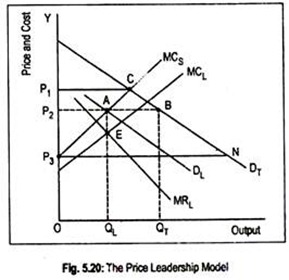 Suppose, the dominant firm sets the price at OP1 (where DT and MCs intersect each other at point C). The small firms meet the entire demand P1C at the price OP1. Thus, the dominant firm has nothing to sell in the market. At a price of OP3, the small firm will supply nothing. It is obvious that price will be set in between OP1 and OP3 by the leader.

The demand curve faced by the leader firm of the oligopoly industry is determined for any price—it is the horizontal distance between industry demand curve, DT, and the marginal cost curves of all small firms, MCS. In Fig. 5.20, DL is the leader’s demand curve and the corresponding MR curve is MRL.

Being a leader in the industry, the dominant firm’s supply curve is represented by the MCL curve. Since it enjoys a cost advantage, its MC curve lies below the MCS curve.

A dominant firm maximizes profit at point E where its MCL and MRL intersect each other. The corresponding output of the price leader is OQL. Price thus determined is OP2. Small firms accept this price OP2 and sell QLQT (=AB) amount – industry demand the OQT output.

In actual practice, the analysis of price leadership is complicated, particularly when new firms enter the industry and try to become the leader or dominant.

Another method to remove price war among oligopoly firms is merger. Merger may be defined as the consolidation of two or more independent firms under single ownership. When a firm purchases assets of another firm, acquisition takes place. Merger and acquisition take place because the management comes to a conclusion that a consolidated firm is powerful than the sum of individual firms.

Since basically the difference between cartel and merger is a legal one, we won’t consider mergers and acquisitions. The marginalistic principle applied in the case of profit maximizing cartel is also applicable in the case of merger.

Each seller’s price-output decision is influenced by the perceptions of countermoves of rival sellers.

Given the large number of possible reactions, we come up with different models based on different assumptions about the behaviour of the rival sellers, the extent and form of exit and entry, the likelihood of collusion between firms. ‘Unfortunately, economic theory does not suggest which assumptions to use. In any event, each of these theories must ultimately stand or fall on its predictive powers’.