The below mentioned article provides short notes on Monopsony Pricing.

Monopsony refers to a market situation when there is a single buyer of a commodity or service. It applies to any situation in which there is a ‘monopoly’ element in buying.

For example, when consumers of a certain commodity are organised, or when a socialist government regulates imports, or when a certain individual happens to have a taste for some commodity which no one else requires, or when a single big factory in an isolated locality is the sole buyer of some grades of labour, there is monopsony.

Monopsony can be formally defined, in the words of Liebhafsky, as “the case of a single buyer who is not in competition with any other buyers for the output which he seeks to purchase, and as a situation in which entry into the market by other buyers is impossible”. 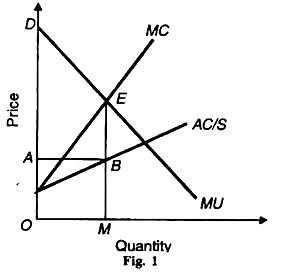 The monopolist equilibrium is established at E where the marginal utility of the product to the monopolist equals the marginal cost. He buys OM quantity at OA (=MB) price which is the supply price for that output. The surplus obtained by the Quantity monopolist is the area DEBA—the difference between what he is Fig. 1 prepared to pay ODEM and what he actually pays OABM e.g., (DEBA = ОDEM – OABM).