Under monopoly, for the equilibrium and price determination there are two different conditions which are:

1. Marginal revenue must be equal to marginal cost.

However, there are two approaches to determine equilibrium price under monopoly viz.; 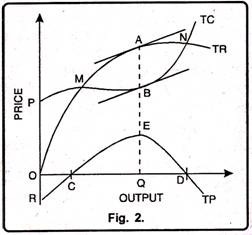 Total profits of the firm are represented by TP curve. It starts from point R showing that initially firm is faced with negative profits. Now as the firm increases its production, TR also increases. But in the initial stage, the rate of increase in TR is less than TC.

According to marginal revenue and marginal cost approach, a monopolist will be in equilibrium when two conditions are fulfilled i.e., (i) MC=MR and (ii) MC must cut MR from
below. The study of equilibrium price according to this analysis can be conducted in two time periods.

These three possibilities are described as follows:

If the price determined by the monopolist in more than AC, he will get super normal profits. The monopolist will produce up to the level where MC=MR. This limit will indicate equilibrium output. In Figure 3 output is measured on X-axis and price on Y-axis. SAC and SMC are the short run average cost and marginal cost curves while AR or MR are the average revenue or marginal revenue curves respectively. 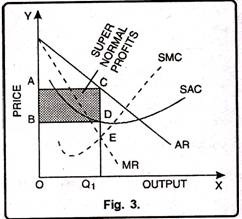 A monopolist in the short run would enjoy normal profits when average revenue is just equal to average cost. We know that average cost of production is inclusive of normal profits. This situation can be illustrated with the help of fig 4. 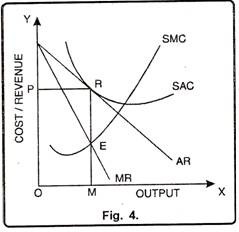 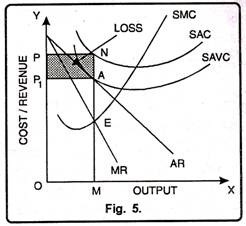 It signifies that the firm will cover only average variable cost from the prevailing price. At OP1 price, firm will bear loss of fixed cost i.e., A per unit. The firm will bear the total loss equal to the shaded area PP1 AN. Now if the price falls below OP1, the monopolist will stop production. It is so because if he continues production, he will have to bear the loss of variable costs along with fixed costs.

Long-run is the period in which output can be changed by changing the factors of production. In other words, all variable factors can be changed and monopolist would choose that plant size which is most appropriate for specific level of demand. Here, equilibrium would be attained at that level of output where the long-run marginal cost cuts marginal revenue curve from below. This can be shown with the help of Fig. 6. 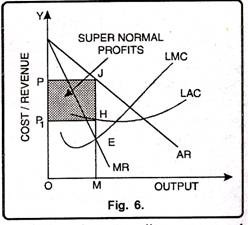