The word monopoly has been derived from the combination of two words i.e., ‘Mono’ and ‘Poly’. Mono refers to a single and poly to control.

In this way, monopoly refers to a market situation in which there is only one seller of a commodity.

There are no close substitutes for the commodity it produces and there are barriers to entry. The single producer may be in the form of individual owner or a single partnership or a joint stock company. In other words, under monopoly there is no difference between firm and industry.

“Pure monopoly is represented by a market situation in which there is a single seller of a product for which there are no substitutes; this single seller is unaffected by and does not affect the prices and outputs of other products sold in the economy.” Bilas

“Monopoly is a market situation in which there is a single seller. There are no close substitutes of the commodity it produces, there are barriers to entry”. -Koutsoyiannis

“A pure monopoly exists when there is only one producer in the market. There are no dire competitions.” -Ferguson

“Pure or absolute monopoly exists when a single firm is the sole producer for a product for which there are no close substitutes.” -McConnel

We may state the features of monopoly as:

1. One Seller and Large Number of Buyers:

The monopolist’s firm is the only firm; it is an industry. But the number of buyers is assumed to be large.

3. Difficulty of Entry of New Firms:

There are either natural or artificial restrictions on the entry of firms into the industry, even when the firm is making abnormal profits.

4. Monopoly is also an Industry:

Under monopoly there is only one firm which constitutes the industry. Difference between firm and industry comes to an end.

Under monopoly, monopolist has full control over the supply of the commodity. But due to large number of buyers, demand of any one buyer constitutes an infinitely small part of the total demand. Therefore, buyers have to pay the price fixed by the monopolist.

Nature of Demand and Revenue under Monopoly: 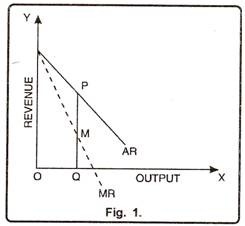 Under monopoly, shape of cost curves is similar to the one under perfect competition. Fixed costs curve is parallel to OX-axis whereas average fixed cost is rectangular hyperbola. Moreover, average variable cost, marginal cost and average cost curves are of U-shape. Under monopoly, marginal cost curve is not the supply curve. Price is higher than marginal cost. Here, it is of immense use to quote that a monopolist is not obliged to sell a given amount of a commodity at a given price.

Monopoly Equilibrium and Laws of Costs:

The decision regarding the determination of equilibrium price in the long run depends on the elasticity of demand and effect of law of costs on monopoly price determination.

1. Nature of Elasticity of Demand:

2. Effects of Laws of Costs:

The monopolist also takes into consideration laws of costs while determining the prices. In the long run, output may be produced under law of diminishing costs, increasing costs and constant costs.

A brief description of these laws has been given as under:

If the monopolist produces the commodity under the law of Diminishing Returns or Increasing costs, he will get the maximum profit at point E where marginal revenue is equal to marginal cost. This is indicated in Fig. 7. Here he produces OM units of the commodity and gets PM as the price. His monopoly profit is represented by the shaded area PQRS. No other alternative will give him this much of profit and hence this is the best position for him provided he produces goods under the Law of Increasing Costs. 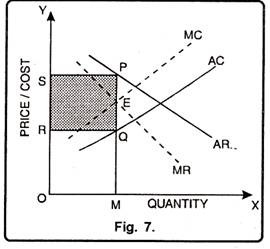 The same approach will be applicable under the Law of Increasing Returns or Diminishing Cost as explained in Fig. 8. Here AC and MC are falling. The MC and MR are equal at point E. accordingly; the monopolist will produce OM units of commodity and sell the same at PM Price. His net monopoly revenue will be PQRS indicated by shaded area. 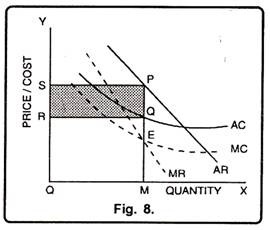 The determination of monopoly price under constant costs can be shown with the help of Fig. 9. In the diagram, the AC curve will be a horizontal line running parallel to OX and for all the levels of output AC will be equal to MC. AR and MR represent the average revenue curve and marginal revenue curve respectively. The equilibrium between MC and MR is brought at point E when the output is OM. Thus, the monopolist will produce OM and will sell it at PM Price. The monopoly profit will, therefore, be equal to PERS which is represented by the shaded area. 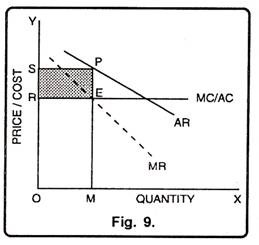 Our analysis explodes some popular fallacies concerning the behavior of monopolies.

Because monopolist can manipulate output and price so it is often alleged that a monopolist “will charge the highest price he can get”. It is generally believed that prices under free competition are lower than under monopoly. This is clearly a misguided assertion. Under certain conditions, things may be altogether different. As explained in the previous table and diagram, there are many prices above the one he charges but the monopolist shuns them for the simple reason that they entail a smaller than maximum profits.

2. Maximum Total Profits and not Maximum Profit per Unit:

If the commodity is produced under the Law of Increasing Returns, the monopolist may be producing more at lower costs and selling at lower prices. This policy may help him to earn higher total revenue. The consumer may also buy larger output at lower prices.

Under monopoly, multiple plants are a situation where a monopolist produces in two or more plants. Each plant has different cost structure. In this situation, multi plant monopoly takes two decisions.

(i) To decide the amount of output to be produced and the price at which it will be sold to maximize profits.

(ii) To decide the allocation of production between different plants.

The multi-plant monopoly is based on following assumptions:

(iii) Cost structure of both plants is different.

The multiple plant monopoly can be illustrated with the help of Fig. 14.

Here, monopolist will sell OX output at price OP to get maximum profit. At point e1 and e2 = By extending point E leftwards to cut MQ at e1 and MC2 at e2 > producer decides the allocation of production of OX units between plant 1 and plant 2. In short, from point e1, we draw perpendicular to the X-axis. It gives O1 as the level of output produced by plant 1. Again OX2 is the level of output produced by plant 2 and OX = OX1 + OX2

Monopolistic exploitation of labour can be discussed under:

(i) Exploitation of labour by a monopoly firm, and

(1) Exploitation of Labour by a Monopoly Firm:

The fact that market demand curve for labour by a monopoly firm in product market is based on MRPC rather than on its VMPL leads to monopolistic exploitation of labour. There is exploitation because labour is paid wages equal to its MRP which is lower than its VMP. 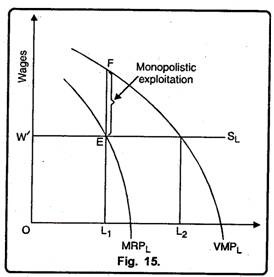 According to Joan Robinson, a productive factor is exploited if it is paid a price less than the value of its marginal product (VMP). Robinson’s analysis of monopolistic exploitation of labour (a variable factor) by an individual monopoly firm is illustrated in Fig. 15.

It is shown in Fig. 15, the MRP1 and S1 curves, a profit maximizing monopolist will employ OL) units of labour determined by point E and pay wage OW (= EL1). But, under perfect competition in the product market, VMP1 is the relevant labour demand curve. Therefore, OL1 units of Labour would be demanded at wages FL1 or else, the employment will be OL2. 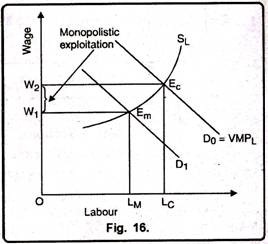 In case of a downward sloping demand curve, there is bound to be a diversion between price (AR) and the marginal revenue (MR), marginal revenue being lower than the price. Since all the firms, whether in perfect or in imperfect market, attempt at profit maximization, monopolistic firm will have to pay labour a wage rates that equal MRPL .

Therefore, the difference between OW2 and OW1 cannot be considered as exploitation. The difference arises due to the market conditions. However, if product differentiation is excessive and commodities are imposed on the consumers by the monopolistic sellers, then the argument of monopolistic exploitation may be acceptable.