In this article we will discuss about the correction in balance of payments through variations in exchange rates.

If a country suffers from payments deficits, the equilibrium adjustments can be possible through the suitable variations in exchange rates. Under the IMF Charter, a member country is permitted to make an adjustment in its exchange parity to deal with a fundamental disequilibrium in its balance of payments. This has led to a great controversy whether the government should have a fixed or a flexible exchange rate.

Milton Friedman has defended the flexible exchange rates when he remarks, “I believe that a system of floating exchange rates would solve the balance of payments problem for the United States far more effectively than our present arrangements. Such a system would use the flexibility and efficiency of the free market to harmonize our small foreign trade sector with both the rest of our massive economy and the rest of the world; it would reduce problems of foreign payments to their proper dimensions and remove them as a major consideration in governmental policy about domestic matters and as a major preoccupation in international policy negotiations, it would foster our national objectives rather than be an obstacle to their attainment.”

Under a system of floating exchange rates, the major gain is the world-wide expansion of foreign trade. It provides every opportunity to the citizens of all countries, and especially those of under­developed countries, to sell their products in open markets under equal terms and thereby have every incentive to use their resources efficiently.

The floating and only floating exchange rates, stresses Friedman, can provide a reasonable assurance to all countries that the resultant trade expansion will be balanced and will not interfere with the domestic objectives.

The adherence to a pegged rate of exchange implies that a relatively small foreign sector dominates the national economic policy. Those who regarded this as an advantage refer to it as the discipline of gold standard. With the present pseudo gold standard at work, it is the discipline which we can do well without.

Even if we accept the truth underlying the argument that the floating rates of exchange introduce an element of uncertainty into foreign trade and thereby discourage its expansion, we cannot afford to ignore the fact that a pegged rate will be under heavy pressure, if the prevailing rate declines, and the authorities will have to meet the situation through internal deflation or some form of exchange control.

In this context, remarks Friedman, “The uncertainty about the rate would simply be replaced by uncertainty about internal prices or about the availability of exchange; and the latter uncertainties, being subject to administrative rather than market control, are likely to be more erratic and unpredictable. Moreover, the trader can far more readily and cheaply protect himself against the danger of changes in exchange rates, through hedging operations in a forward market, than he can against the danger of changes in internal prices or exchange availability.” “Floating rates” concludes Friedman, “are therefore, more favourable to private international trade than pegged rates.”

Henery C. Wallich, on the contrary, believes that flexible exchange rates are inadvisable since “their successful function would require more self- discipline and mutual forbearance than countries today are likely to muster.” He points out the possibilities of a worldwide accelerated inflation resulting from the floating exchange rates. He also expresses the fear that such rates will cause increasing international disintegration.

In his words, “International integration and flexible rates are incompatible seems to be the view also of the European Union, who have left no doubt that they want stable rates within the Union. The same applies if we visualize the ‘Kennedy Round’ under the Trade Expansion Act.” Wallich maintains that a system of fixed exchange rates should be allowed to work. But it is highly doubtful if this system is workable in the present state of international economy.

The balance of payments deficits of a country can be better corrected through a system of floating foreign exchange.

Depreciation of a country’s currency—that is, a reduction in its par value in terms of other currencies—will ordinarily improve the country’s balance of trade and payments by reducing foreign exchange payments for imports and increasing the foreign exchange receipts from exports.

The price elasticities of domestic demand for imports and of the foreign demand for exports exercise a substantial impact upon the balance of payments position of a country. The greater the price elasticities of these demands, the greater will be the effect of a given change in the exchange rate on the balance of payments position and vice- versa.

It will mean that given the greater price elasticities of these demands a smaller change in the foreign exchange rate, will be required to remove the balance of payments disequilibrium and vice-versa.

The usual effect of a given rise in exchange rate is to effect a reduction in the autonomous international payments and an expansion in autonomous receipts. This results in a fall in demand for and a rise in the supply of foreign currency. The reverse effects will flow from a fall in the foreign exchange rate.

Assuming perfectly competitive conditions in the foreign exchange market, the rate of exchange is determined by the forces of demand and supply. Suppose that there are just two countries A and B and each country, in return of her exports, demands the currency of the other. The demand for the currency of country A arises simply because the people of country B wish to purchase goods from country A. 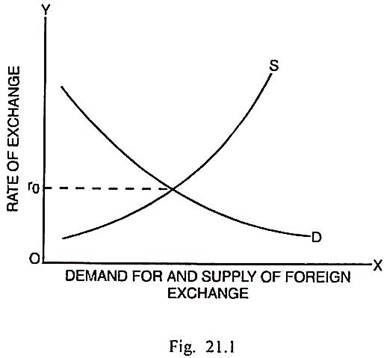 If the demands for various categories of goods and services exported by the depreciating country are typically inelastic, exchange depreciation may reduce the export proceeds. The supply curve in such a situation will be negatively sloping. We can visualise two possible cases of negatively sloping curves of foreign exchange and trace their effects upon the balance of payments.

In Fig. 21.2 (ii), both demand and supply curves slope negatively but the latter is more steeply sloped than the former. At an exchange rate r0, the payments deficit is AB. A depreciation in the exchange rate from r0 to r1 results in a decline in export proceeds by AA1. The payments for imports, on the other hand, decline by BB1. Thus, an exchange depreciation brings about an improvement in the payments deficit. The overall deficit, in this case, is reduced from AB to A1B1.

Now we shall briefly study how the changes in the exchange rate can maintain balance of payments equilibrium after the equilibrium is disturbed either due to the autonomous capital outflow or the increased preference for the foreign products. The process of adjustment has been shown through Fig. 21.3. 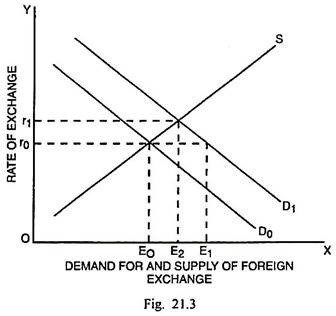 Harvey and Johnson believe that they do so for the following main reasons:

(b) To eliminate the effects of speculation in foreign exchange;

(c) To stabilise the exchange rates; and