Later on, economists like Ohlin, Myrdal, Lindahl, Robertson and J. Viner have considerably contributed to this theory.

According to this theory, rate of interest is determined by the demand for and supply of loanable funds. In this regard this theory is more realistic and broader than the classical theory of interest.

Loanable funds theory differs from the classical theory in the explanation of demand for loanable funds.

According to this theory demand for loanable funds arises for the following three purposes viz.; Investment, hoarding and dissaving:

Dissaving’s is opposite to an act of savings. This demand comes from the people at that time when they want to spend beyond their current income. Like hoarding it is also a decreasing function of interest rate.

The supply of loanable funds is derived from the basic four sources as savings, dishoarding, disinvestment and bank credit.

They are explained as:

Savings constitute the most important source of the supply of loanable funds. Savings is the difference between the income and expenditure. Since, income is assumed to remain unchanged, so the amount of savings varies with the rate of interest. Individuals as well as business firms will save more at a higher rate of interest and vice-versa.

Dishoarding is another important source of the supply of loanable funds. Generally, individuals may dishoard money from the past hoardings at a higher rate of interest. Thus, at a higher interest rate, idle cash balances of the past become the active balances at present and become available for investment. If the rate of interest is low dishoarding would be negligible.

Disinvestment occurs when the existing stock of capital is allowed to wear out without being replaced by new capital equipment. Disinvestment will be high when the present interest rate provides better returns in comparison to present earnings. Thus, high rate of interest leads to higher disinvestment and so on.

Determination of Rate of Interest: 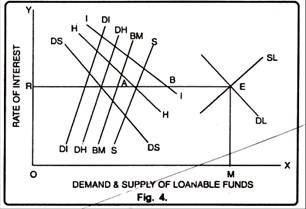 Although, loanable funds theory is superior to classical theory, yet, critics have criticised it on the following grounds:

Keynes opined that loanable funds theory is based on the unrealistic assumption of full employment. As such, this theory also suffers from the defects as the classical theory does.

Like classical theory, loanable funds theory is also indeterminate. This theory assumes that savings and income both are independent. But savings depend on income. As the income changes savings also change and so does the supply of loanable funds.

This theory assumes savings, hoarding, investment etc. to be related to interest rate. But in actual practice investment is not only affected by interest rate but also by the marginal efficiency of capital whose affect has been ignored.

This theory makes an attempt to integrate the monetary as well as real factors as the determinants of interest rate. But, the critics have maintained that these factors cannot be integrated in the form of the schedule as is evident from the frame work of this theory.

Loanable funds theory rests on the assumption that the level of national income remains unchanged. In reality, due to the change in investment, income level also changes accordingly.

Improvement over the Classical Theory:

Loanable funds theory is considered to be an improvement over the classical theory on the following aspects:

1. Loanable funds theory recognizes the importance of hoarding as a factor affecting the interest rate which the classical theory has completely overlooked.

3. Loanable funds theory takes into consideration the role of bank credit which acts as a very important source of loanable funds.

Interest: Definitions, Concept and Causes of Difference
The Classical Theory of Interest (With Diagarm)