According to the classical theory, interest is the price paid for saving of capital.

Like the value of other things, the price of saving is determined by its demand for and supply of savings. Let us consider the demand and supply sides separately.

Demand for capital comes mostly from businesses. There are, of course, some people who borrow for purposes of consumption, litigation or religious or social ceremonies. But most of the capital is demanded today by entrepreneurs who use it for productive purposes. They will in no case pay for its services at a rate higher than its productivity at the margin.

Productivity goes on diminishing as more and more capital is employed in an industry. The borrower compares the prevailing rate of interest with the marginal productivity of capital, i.e., the amount added to the total output by the use of the last installment of capital. He stops where he feels the productivity to be equal to the interest paid. He will not pay more than the worth of capital to him at the margin.

When the rate falls, it becomes worthwhile to use capital in occupations of lower productivity. Thus demand for it expands. All this is true of borrowers as a whole too. Thus, it is clear that demand curve for capital (or demand for savings to buy the capital) will slope downwards towards the right (see the I-I curve in Fig. 34.2). 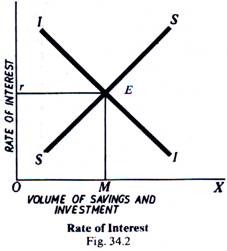 According to the classical theory, the money which is to be used for purchasing capital goods is made available by those who save from their current income. By postponing consumption of a part of their income, they release resources for production. Savings involve the element of waiting for the future enjoyment of savings.

But people prefer the present enjoyment of goods and services to the future enjoyment of them. Therefore, if people are to be persuaded to save money and to lend it to entrepreneurs, they must be offered some interest as reward. In other words, to make people overcome their time preference, inducement must be offered in the shape of interest.

The more savings the people will do, the more consumption they will have to postpone, the greater must be the rate of interest they will ask to make such a postponement worthwhile. Thus, in order to induce people to save more, a higher rate of interest must be offered.

Moreover, higher rates of interest have also to be paid if savings have to come from those persons whose rates of time-preference are relatively more strongly weighted in favor of the present satisfactions. The supply curve of capital will therefore slope upwards to the right (SS curve in Fig. 34.2).

Equilibrium between Demand and Supply:

If any change in the demand for investment and/or supply of savings comes about, the curves will shift accordingly and, therefore, the equilibrium rate of interest will also change.

The Classical theory is also called ‘Real’ theory of interest, because it is based on real forces of demand and supply side, i.e., productivity on the side of demand and thrift on the side of supply. It seeks to balance the productivity of capital goods on the one hand and saving or supply of capital goods on the other, interest on capital has to be paid in order partly to induce people to postpone consumption and partly to induce them to risk their savings in business.

The more consumption they have to postpone, the greater must be the inducement or interest offered. The actual rate of interest is determined by investment (demand side) and saving (supply side). The equilibrium rate of interest brings savings and investment into equality.

Classical theory of interest came in for serious criticism, specially at the hands of Keynes.

The main grounds on which it is criticized are given as under:

“Within the framework of a system of theory, built on the assumption of full employment, the notion of interest as a reward for waiting or abstinence is highly plausible. It is the premise that resources are typically fully employed that lacks plausibility in the contemporary world,” If at any time in the country unemployed resources are found on a large scale, there is no need for paying people to abstain from consumption, i.e. to wait in order that more resources should be devoted to the production of capital goods.

When there is unemploy­ment of resources, more capital goods can be produced by putting these idle resources from the production of capital goods. Therefore, something other than a theory or ‘waiting’ or ‘time preference’ is needed to explain why interest is paid.

As we know from Keynesian economics, the fall in investment leads to decrease in income and out of the reduced income, less is saved and, therefore, savings curve also changes. Thus, we see that classical theory ignores the effect of changes in investment on savings.

As income rises, for example, the savings schedule or curve will shift to the right. Thus, we cannot know what the rate of interest will be unless we already know what the income level is. And we cannot know that income level without already knowing the rate of interest, since a lower interest rate will mean a larger volume of investment and so via the multiplier, a higher level of real income. The classical theory, therefore, offers no solution and is indeterminate.