Supply and Demand of Loanable Funds (With Explanations)!

To improve upon the classical macro theory by taking the influence of money into account, a school of thought developed which is popularly called the neoclassical school.

They built up the loanable-funds theory of interest. The principal contributors to the development of this theory are Knut Wicksell, Bertil Ohlin, Lindahl and Gunner Myrdal—all Swedish economists—D.H. Robertson and J. Viner, the English-speaking economists.

In the opinion of these writers, the classical theory was inadequate in as much as it completely ignored the influence of monetary factors on the rate of interest.

Their view was that in addition to such real factors as thriftiness, waiting, time preference and productivity of capital, monetary factors like hoarding and dishoarding of money, creation of credit by banks, loans for consumption must also be given their due in the determination of the rate of interest. They, therefore, incorporated these monetary influences into the ‘real’ framework of classical interest rate theory.

When savings are supplemented with hoardings and bank credit, the sum total is referred to as loanable funds. Similarly, loanable funds are demanded not for investment alone but for hoarding and consumption purposes.

There are four important sources of the supply of loanable funds:

All of these sources are dependent upon the rate of interest, that is, they are interest-elastic.

Savings done by households and firms out of their incomes are the biggest source of loanable funds. The loanable fund theorists considered savings in two senses. The Swedish economists considered saving in the ex-ante sense which means savings planned out of the anticipated incomes. D.H. Robertson took savings as the difference between the income of the previous period and consumption of the current period (S = Yt-1– Ct).

In both these versions, savings were assumed to be interest-elastic; that is, the assumption was that the volume of saving increases with incomes and vice versa. It was conceded that savings by households depend on their income but the neoclassical contended that given the level of income, savings vary with the rate of interest.

It is not only individuals, business concerns also save. Business concerns always retain a part of their earning for ploughing back into their business whether they are individual enterprises, partnerships or joint stock companies. While other considerations may also work with them, their savings depend also upon the current rate of interest.

A high market rate of interest means a high cost of borrowing and this encourages business savings as a substitute for borrowing from the market. By saving thus the firms may not enter the loanable-funds market but this influences the rate of interest by reducing the demand for loanable funds. In Fig. 7.2, the curve S slopes from left upwards to the right showing that savings increase with rise in the rate of interest.

Dishoarding means bringing out hoarded money into use and thus constitutes a source of supply of loanable funds. Individuals are free to dishoard the idle cash balances from a previous period thereby making them active. People hoard money to satisfy their desire for liquidity. At a low rate of interest there is not much of an inducement to lends more at high rates of interest and less at lower rates. The supply curve of bank money (BM) is shown in the diagram to be sloping upward to the right, that is, it is interest-elastic.

Disinvestment means not providing sufficient funds for depreciation of equipment. It takes place when business concerns do not feel inclined to put part of their earnings into the depreciation fund which is used for replacement of existing capital equipment when it wears out. In effect this means a supply of active balances or loanable funds.

Disinvestment particularly characterizes declining industries or other industries in a period of high and booming rate of interest. As M.M. Bober has observed, “Disinvestment is encouraged somewhat by a high rate of interest on loanable funds. When the market rate is high some of the current capital may not produce a marginal revenue product to match this rate of interest. The firm may decide to let this capital run down and to put the depreciation funds in the loan market.” 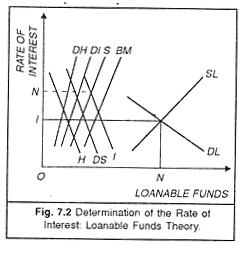 The demand for loanable funds comes from many sides. The Classical theory emphasised only the investment demand but loanable fund theorists consider other sources as well, that is, dissaving and hoarding.

Entrepreneurs go on investing in a capital asset up to the point at which the cost of borrowing i.e. the rate of interest equals its expected marginal revenue productivity.

Since marginal revenue productivity of a capital asset falls as more units of it are produced, the businessmen are prepared to invest more only at lower rates of interest. In other words, the demand for loanable funds for investment purposes rises with a fall in the rate of interest, or is interest- elastic. The investment-demand curve is, therefore, shown to be sloping downward to the right. It is the curve L in the diagram.

Dissaving means consuming more than the income in the current period. It is the excess of expenditure of consumption over income and is thus negative saving. Some people are anxious to purchase such durable goods as houses, automobiles, refrigerators, television sets and air conditioners when they do not have the saving to pay for them.

They get it on installment basis and thus spend more than their current income. Dissaving is more at lower rates of interest and less at higher rates. Therefore, the dissaving curve DS is shown to be sloping from left downward to the right in the diagram.

Loanable funds are also demanded for hoarding purposes that is for the satisfaction of the desire of people to hold money. People like to hold money in idle cash balances when they feel that the current rate of interest on lending is not sufficiently high to induce them to part with their money and that in the near future they will be able to make better use of their hoarded balances.

Surely then inducement to hoard is greater at low rates of interest and less at high rates.

Determination of the Rate of Interest:

The equilibrium rate of interest is determined by the interaction of the factors working on the demand and supply side of loanable funds. The rate of interest is determined where the demand curve DL intersects the supply curve SL. It is Oi. At any other rate, there would be disequilibrium in the loanable funds market and so it will have a tendency to come to the level Oi.

The market rate of interest has, thus, a tendency to move to the natural rate through changes in income over a period of time. It is through this sort of period analysis that the loanable fund theorists brought changes in the level of income into their discussion of the rate of interest.

An Alternative Rendering of the Loanable Funds Theory:

The loanable fund theory discussed in the way given above is the simplest exposition. But slight concentration of attention shows us clearly that saving and dissaving, hoarding and dishoarding, investment and disinvestment are forces opposing each other. As these forces operate in the loanable funds market, it is their net effect which goes to determine the market rate of interest. A subtle rendering of the theory can, therefore, be presented in net magnitudes like net saving, hoarding and net investment.

The equilibrium rate of interest is that at which the demand for loanable funds is equal to their supply. Taking the individual components of the demand and supply side, we can write in symbols that the equilibrium prevails when

In order to get net magnitudes, we transfer DS to left-hand side, DH and DI to right-hand side. The condition then reduces to

The essence of the equilibrium condition of the loanable-funds theory thus is:

net saving and the creation of hank money must equal net investment and the change in idle cash balances, in a period of time, for the equilibrium rate of interest to be determined

But then the classical theory takes saving out of current income into account which may well exceed the savings of the loanable funds theory because current income is increased by bank credit or dishoarding.

This increases saving. There is, thus, for practical purposes, not much difference between the two theories except the fact that the term, ‘loanable funds’ has been substituted for ‘current saving.’ Really speaking the Pigovian supply schedule of savings amounts to the same thing as the Robertsonian or Swedish supply schedule of loanable funds.

Secondly, Keynes regarded the concept of hoarding in the loanable funds theory as dubious. He observed that as long as the amount of money remains the same, hoarding simply cannot increase or diminish, for money supply has to be in somebody’s cash balances at any time: the hoarding of money by one person must be offset by the dishoarding of another.

In this context, G. N. Halm has rightly observed:

It is however less than fair to say that loanable funds theory involves circular reasoning since it does not take the changes in income into consideration. The theory seeks to determine the rate of interest through period analysis.

Fourthly, the loanable funds theory is criticised for its attempt to combine the monetary factors and real factors influencing the rate of interest. The two sets of factors are entirely different in their origin and impact and. therefore, must be separately accounted for by taking the changes in income as the reconciling factor.

J.R. Hicks told in that the rate of interest operates both as a monetary factor and a real factor in the asset market and the goods market respectively.

The Classical Theory of Rate of Interest (With Diagram)
Investment: Importance and Types | Macro Economics