Get the answer of: What are the Alternative Objectives of Business Firms?

A firm is a technical unit in which inputs are converted into output or saleable goods. Business firms operate with a number of objectives in view. The objective and goals to be pursued often depend on the personal motives of managers. They also attempt to minimise costs. And cost minimisation subject to output constraint is another name of profit maximisation.

In economic theory it is usually assumed that a firm attempts to maxi­mise its total profit. Of course, this is not universally true. One can easily think of small firm which is run by its owner. The owner may seek to maximise his own free time subject to the constraint that his earnings exceed some minimum level. Again, there are instances of overworked business people who often, on medical advice, give up profitable business opportunities to live a peaceful and quiet life.

W. J. Baumol and others have observed that, firms often seek to maximize the money value of their sales (i.e., total revenue) subject to a constraint that their profits do not fall short of some minimum acceptable level. In truth, so long as profits are at a satisfactory level, management will devote the bulk of its energy and resources to the expansion of sales.

A business firm may pursue this objective just to maintain its competitive position. (This is partly dependent on the sheer size of the firm’s operations, with which its salaries may be more closely related, than to its profits. Or, it may simply be a matter of prestige, e.g., empire building by the Birlas and Tatas).

Although in the theory of firm we start with the assumption that a firm’s output and pricing policies are guided by the goal of profit maximisation, but sometimes a firm far from optimising profit may face a situation of loss, as price cannot cover average cost. A losing firm does not close down in the short run. Rather, it tries its best to minimise the loss and thus its objective becomes loss minimisation. However, this objective is valid only in the short run. In the long run, no firm can operate with loss.

In duopoly, or oligopoly, the firms’ objectives are quite different. In collusive oligopoly the rival firms make open on secret agreement among them with avowed objective of joint profit maximisation. Some other duopolist or oligopolist are more concerned with market-sharing and sur­vival rather than maximising profit.

It has been contended by some economists in recent years that monopo­lists give ‘special weight’ to non-profit goals as they have freedom of choice in selling products and buying inputs. The non-profit goals may be empire- building, supporting research, making charity, discriminating against some special groups.

Some claim that the separation of ownership and manage­ment in big companies is the cause for such firms to pursue non-profit goals. It has been contended by management that some ‘minimum level of profit’ is necessary to be able to satisfy the shareholders. Beyond this level, man­agers pursue their own goals that are non-pecuniary in nature, such as publicity, image, amenities, power (empire building), etc.

It is most frequently assumed in economic analysis that the firm is trying to maximise its total profits. And the proposition is that “no firm can be earning maximum profits unless its marginal cost and its marginal revenue are (at least approximately) equal, i.e., unless an additional unit of output will bring in as much money as it costs to produce, so that its marginal profitability is zero.”

We can derive the marginal cost equals marginal revenue proposition with the aid of Fig. 2. At any output, OQ, total reve­nue is represented by the difference be­tween the two areas — total profits are given by the shaded areas TKP minus the small shaded area, RTC. 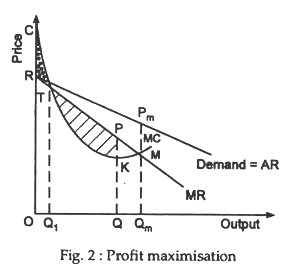 It is now obvious that from point Q a move to the right will increase the size of the profit area TKP. In fact, only at output OQm will this area have reached its maximum size — profits will encompass the entire area TKMP. But at an output OQm, MC equals MR. Indeed, it is the crossing of the marginal cost and marginal revenue curves at that point which prevents further moves to the right (further output increases) from adding still more to the total profit area.

Thus, at the point of maximum profits, marginal costs and marginal revenues must be equal. This is the necessary condition of profit maximisation. However, while at a profit-maximising output MC must equals MR, the converse is not true it is not true that at any output at which MC equals MR, the firm can be sure of maximising its profits. A sufficient condition for profit maximisation of that the MC curve must cut the MR curve from below (and not from above). 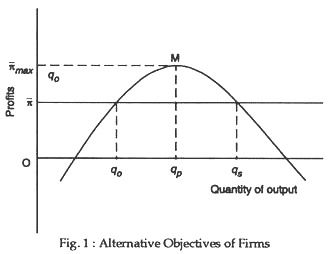 In Fig. 1 above the profit-maximising condition is satisfied at output OQt as well as at OQm. But, at OQt the firm obtains only the net loss (negative profit) represented by the area RTC. A movement in either direction from point Qt will help the firm either by reducing its costs more than it cuts its revenues (a move to the left) or by adding to its revenues more than to its costs. Therefore, output OQt is a point of minimum profits even though it meets the marginal profit-maximising condition of MC=MR.

What does the marginalist rule for profit maximisation show? The rule does not itself indicate the price to be charged at the appropriate level of output. This depends upon the firm’s demand or average revenue curve. Again, the elasticity of the demand curve depends upon the structure of the particular market in which the firm operates. Marginal analysis shows how each firm achieves equilibrium in different market environments.

However, even if a firm maximises its profits it does not follow that the corresponding level of output is necessarily an optimum one. In fact, “the optimum output is that at which average cost is at its lowest, that is, factors are combined in the most efficient (least-cost) way. Profit may be maximised (with marginal- cost equal to marginal revenue) at the point of minimum average cost.” This normally occurs only in the case of perfectly competitive firm in the long run.