The following points highlight the five major obstacles to economic growth. The obstacles are: 1. Interlocking Various Circle 2. Population Problems 3. The Difficult of Adapting Western Technology 4. Lack of Preparation for an Industrial Revolution 5. The International Context.

Rapid economic growth is an historical abnormality. Therefore, any overall approach to development must take note of the reality, i.e., the various obstacles to growth as also the persistence of secular stagnation emphasised by A.H. Hansen.

The most fashionable concept here is the vicious circle of poverty, a concept introduced by Nurkse and others. The essence of the concept is that a country is poor because it is poor. The implication is clear. A country’s poverty is itself a major obstacle to growth and development. Because a country is poor, it cannot develop.

And because it cannot develop, it remains poor. In fact, low per capita income is both the cause and the effect of poverty, as Fig. 7 shows. It is in tune with the prevailing post-war mood of pessimism and desperation in which ‘vicious circles’ (of poverty and low wages leading to low investment, and low productivity of labour leading to poverty) loom large in the economists’ vision. 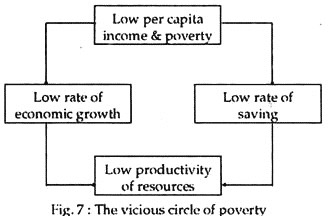 Fig. 7 also illustrates how one hurdle raises yet other hurdles. Low incomes lead to low saving; low saving retards the growth of capital; inadequate capital pre­vents introduction of machinery and rapid growth in productiv­ity; low productivity leads to low incomes. Other elements in poverty are also self-reinforcing. Poverty is accompanied by low levels of skill and literacy; these in turn prevent the adaption of new and improved technologies.

Moreover, the low levels of living in LDCs make for only little capital formation and investment. At low levels of income, people find it difficult to make a substantial amount of sacrifice of present consumption in favour of saving.

So, capital formation becomes a difficult task. If peasant produc­tivity could be increased, such sacrifice might occur and capital could be accumulated. But this constitutes the vicious circle, “For these improve­ments in productivity will typically require that peasants have more and better tools—that is, more capital — to work with. Without capital accumu­lation, output and productivity will remain low. With low output and productivity, there will be no substantial savings or capital formation.”

There is the ‘vicious circle of a limited market’. In a poor country where the bulk of the population live in rural areas, the extent of the market is likely to be very limited. Another obstacle to development is lack of adequate transport and communication facilities.

However, according to A.O. Hirschman, the key shortage in LDCs is decision-making ability, not capital or lack of an organisational framework. If this resource can be mobilised, many of the alleged obstacles to develop­ment will disappear. In fact, there is a whole group of ‘vicious circles’.

Large-scale industry requires a big market. But the extent of the market is limited in LDCs in the initial stage before there occurs a large-scale industrialisation. This may act as a barrier to growth.

There is also a related and more general ‘vicious circle of interdependent production’. Specialised industry is interdependent industry. “A firm must have not only markets in which to sell its products but also supplying industries to provide the tools and unlimited goods its productive activities require”.

So, it becomes difficult to establish one industry when the support­ing industries have not yet come into existence. And, if we cannot succeed in setting up one particular industry it is difficult to see how we can establish a series of interdependent industries.

Rapid population growth creates serious prob­lems for poor countries in which the rate of capital formation is low. This scarce capital simply goes into spreading a larger quantity of tools over a larger number of people without raising per capita productivity.

Moreover, the increase in population creates serious problems in those countries where population is already dense in relation to land and other resources. Due to scarcity of capital goods, the growing labour force cannot find jobs in the urban areas and just adds to the existing labour force in rural areas. The consequence: open and disguised unemployment as a percentage of labour force increases with the passage of time — the reverse of successful develop­ment.

If we really consider the population problem of LDCs, as visualised by most classical and labour-surplus theories, we can imagine a ‘vicious circle’ or ‘population trap’ occurring at very low levels of per capita income. Suppose, in a very poor country (with a per capita income of in Fig. 8) increase in per capita output causes a sharp reduction in the death rate. 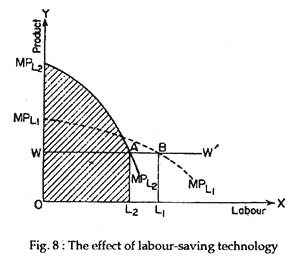 The implication is clear. Per capita income would again fall back to the original level. In Fig.8 a move towards the right of T (the trap) would raise the population-growth curve above the growth of the total-output curve. And, per capita income again falls back to OT.

On the contrary, at higher lev­els of per capita income, further increases in standards of living would have little, if any, impact on the growth of population. In other words, growth would tend to be self-perpetuating. In fact, if we could manage to move to the right of G, the growth in output would exceed that of population, leading to a higher rising) per capita income (out­ put).

The point G is the critical point at which income expan­sion or the contraction process tends to be cumulative, i.e., if one becomes rich, it becomes richer still; if poor, it stays poor. So, Fig.8 illustrates one kind of vicious circle of poverty that might occur in LDCs.

No doubt, modern LDCs do have a most potent instrument of growth at their disposal — modern technology imported from the West. But there are certain problems which create insurmountable obstacles to material pro­gress.

These make the process of ‘getting started’ more difficult.

Some such obstacles are listed below:

The LDCs of the world often face certain difficulties in adapting western technology. It is so because such technology is not ideally suited to their own conditions. Such technol­ogy is mainly of capital-using type. But LDCs are basically capital-scarce.

So, they cannot utilise this technology effectively due to the use of such technology is also not possible due to shortage of entrepreneurs and skilled personnel which characterise most LDCs. At the same time, their own technology is out-dated.

So, they need an intermediate technology which consists of an adaptation of modern methods to their own special condi­tions. In the absence of such technology the latest western methods may be imported. The consequence: coexistence of shortage of certain factors (capital and skilled personnel) and surpluses of others (large numbers of unemployed and unskilled workers).

Fig. 8 shows that if a poor country moves from the technology suggested by the first marginal productivity of labour curve (MPL1) to the second (MPL2) it will get a higher total output (the shaded area), but it will be able to employ fewer labourers at the going wage. Thus, a basic dilemma is encountered — there is a serious conflict between output and employment objectives, between growth and job creation.

Obstacle # 4. Lack of Preparation for an Industrial Revolution:

For industrial devel­opment to take place the social and economic groundwork must be laid first. But, in today’s LDCs attempts are being made to accomplish simultaneously both the industrial revolution and the preparations for such a revolution.

In fact, in such countries agricultural and commercial sectors have not suffi­ciently developed so as to sustain rapid industrial progress. Moreover, the existing institutions and value systems are hardly conducive to material progress.

The basic prerequisites of economic growth — a strong desire for material betterment, a willingness to work hard and with regularity, seri­ousness and punctuality, and ability to assess the future benefits of present sacrifices are conspicuous by their absence in most LDCs.

Most developed countries of today grew with the help of foreign capital in the past. But now the climate for invest­ment in LDCs is not encouraging due to colonial abuses and a strong upsurge of nationalistic feeling and various restrictions imposed by capital- importing countries on the kinds and the terms of foreign investment.

Added to these are dangers of nationalisation and expropriation. This is why, today the flow of private capital from rich to poor countries is insuf­ficient compared to needs. This hampers the process of growth inasmuch as economic depends on capital and investment. However, the recent trends toward globalisation has led to greater informer of financial capital to LDCs.