The article mentioned below provides an algebraic analysis of IS-LM model.

The Derivation of IS Curve: Algebraic Method:

Therefore, we have the following equation for aggregate demand (AD) 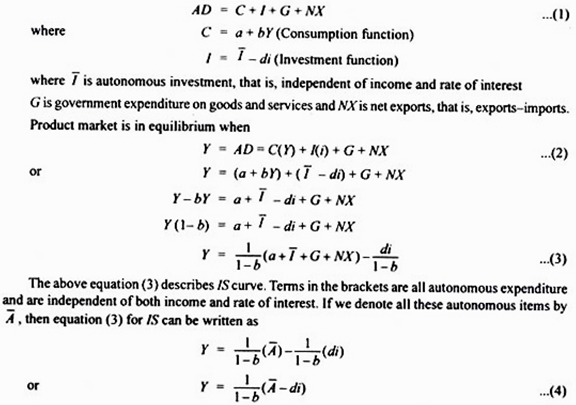 1/1-b is the income multiplier and b is marginal propensity to consume. Given the value of autonomous expenditure, we can obtain value of Y at different rates of interest to draw an IS curve. It is worth noting that the value of autonomous (A) determines the intercept of the IS curve, d in the term di in equation (3) shows the sensitivity of investment to the changes in rate of interest and determines the slope of IS curve. Since fall in interest rate increases investment spending, it will raise aggregate demand and thus the equilibrium level of income. Besides, the slope of the IS curve depends on the size of income multiplier.

The following equations describe an economy:

Derive the equations for IS curve and represent it graphically. 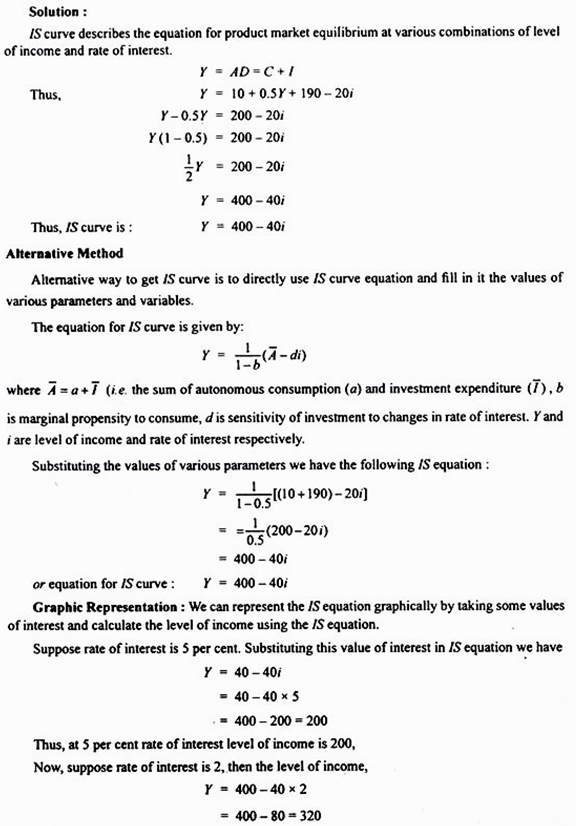 We have now two combinations of interest and income. We can plot these and obtain IS curve. This is done in Figure 20.18. 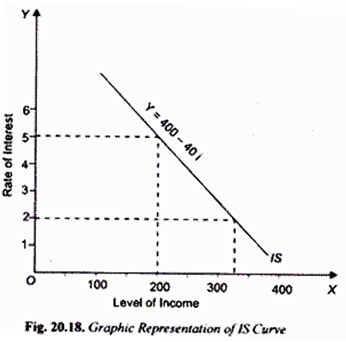 IS Curve: Three-Sector Model with Taxation and Transfer Payments:

In the last section we have derived the IS curve taking government expenditure G on goods and services without considering taxation and transfer payments by it. In fact the concept of consumption function conceives consumption as a function of disposable income and is therefore written as

Further, whereas transfer payments are assumed as lump sum amount, tax can be lump sum tax or levied as proportion of income. If we assume proportionate income tax, then,

where t is the proportion of income which is taken away by way of tax. …(2)

It may be noted in the context of IS equations (3) and (4) that a change in autonomous spending (A) as a result of any of its components will cause a shift in IS curve.

The following equations describe an economy: 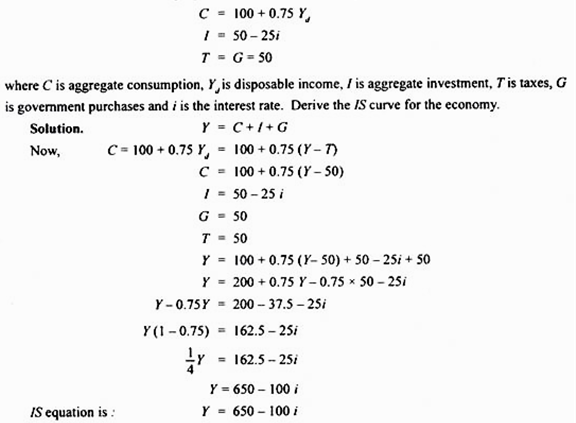 Having derived algebraically equation for IS curve we now turn to the derivation of equation for LM curve. It will be recalled that LM curve is a curve that shows combinations of interest rates and levels of income at which money market is in equilibrium, that is, at which demand for money equals supply of money.

Solving the equation (6) for interest rate we have

Let us state some conclusions about LM curve as given by equation (7). First, since in equation (7) for LM curve, the coefficient (k) of income (Y) is positive, LM curve will slope upward. That is, higher income requires higher interest rate for money market to be in equilibrium, given the supply of real money balances.

From the coefficient of income k/h, we can know whether LM curve is steep or flat. If demand for money is not much sensitive to level of income, then k will be small. Therefore, in case of small k (i.e. low sensitivity of interest with respect to changes in income), small change in interest rate is required to offset a small increase in money demand caused by a given increase in income.

Given the following data about the monetary sector of the economy:

where Md is demand for money, Y is level of income, Ms is rate of interest and M is the supply of money

1. Derive the equation for LM function

2. Give the economic interpretation of the LM curve. Draw LM curve from the above data

For money market to be in equilibrium:

Thus we get the following LM function:

Alternatively, LM equation or function can also be stated as:

LM curve means what would be rate of interest when money market is in equilibrium, given the level of income. Thus, if level of national income is Rs. 4000 crores, then using LM equation (i) we have

Thus, at income of Rs. 4000 crores, rate of interest will be 5 per cent when money market is in equilibrium.

Now, if level of income is Rs. 4400 crores, equilibrium rate of interest will be

With two combinations of interest rate and income level when money market is in equilibrium we can draw LM curve as shown in 20.19. 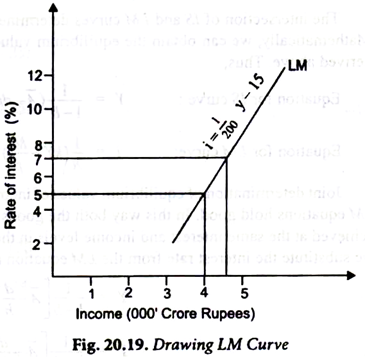 The following data is given for the monetary sector of the economy:

Derive LM equation from the above data 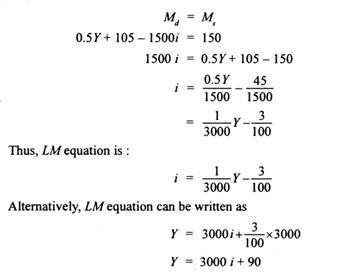 For an economy the following functions are given: 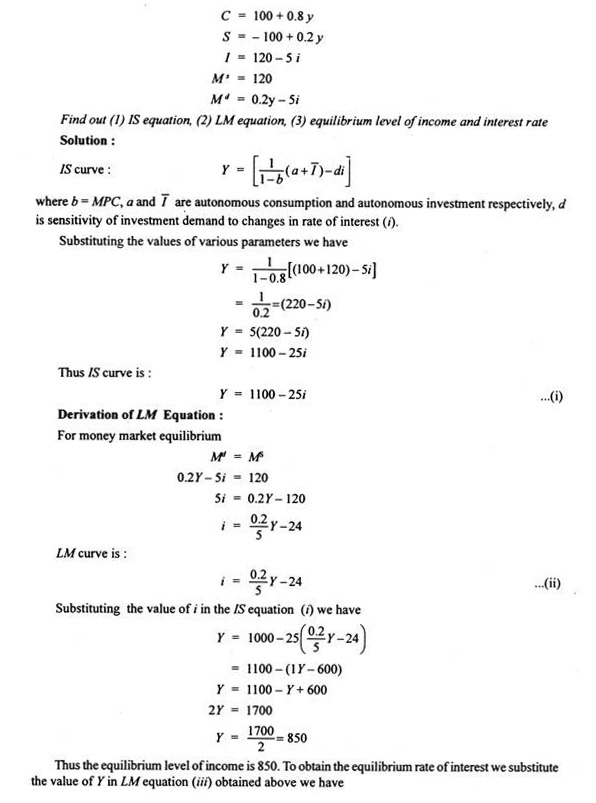 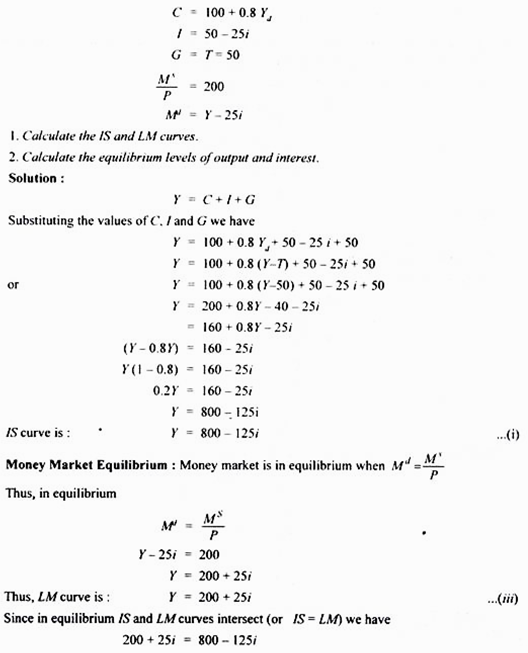 Consider an economy with the following features: 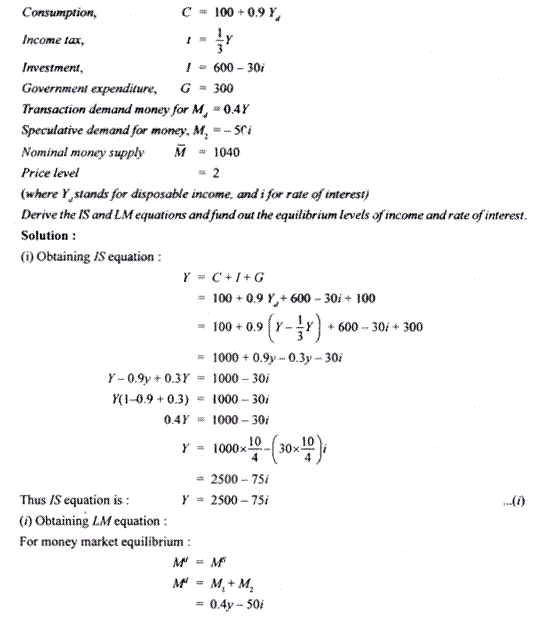 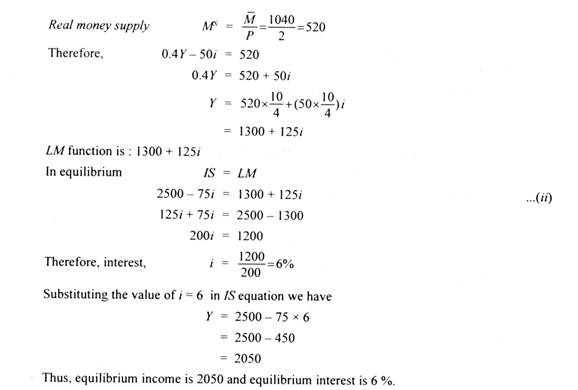 The major macro aggregates for an economy are given as follows: 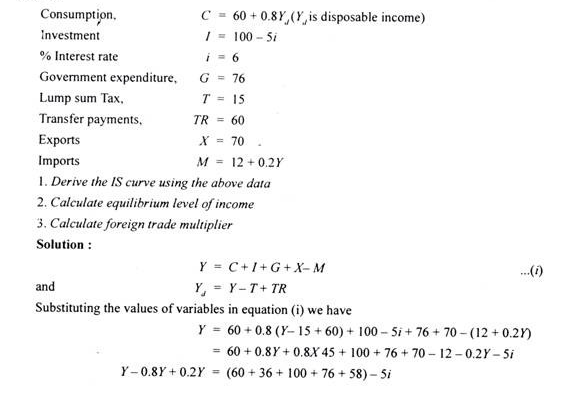 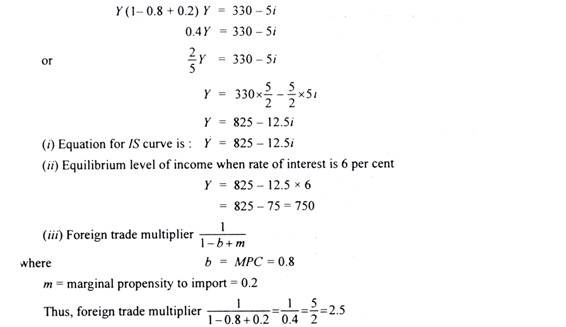 The following data are given for an economy: 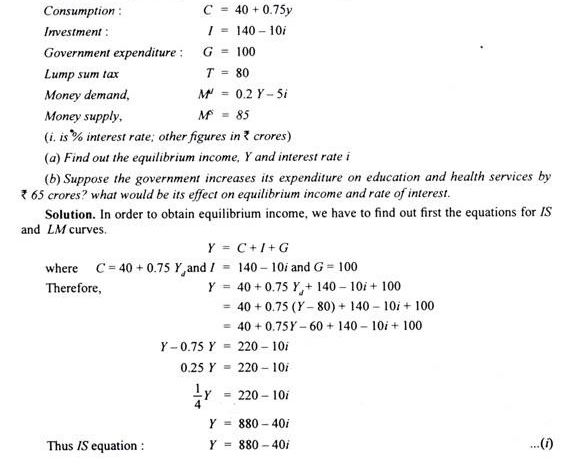 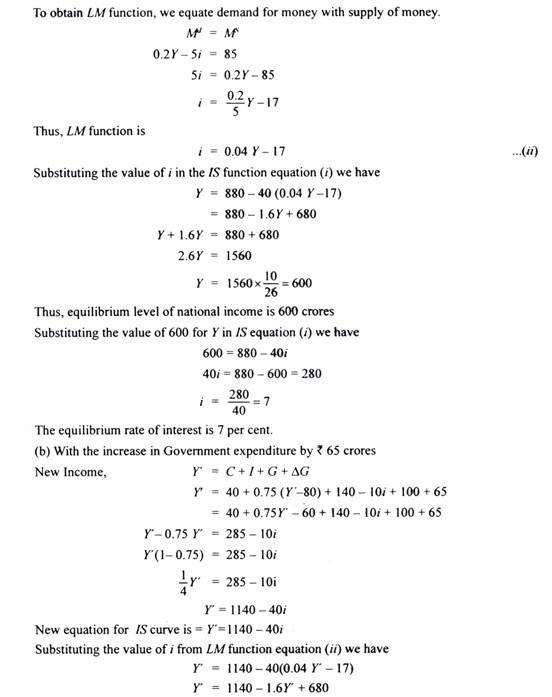 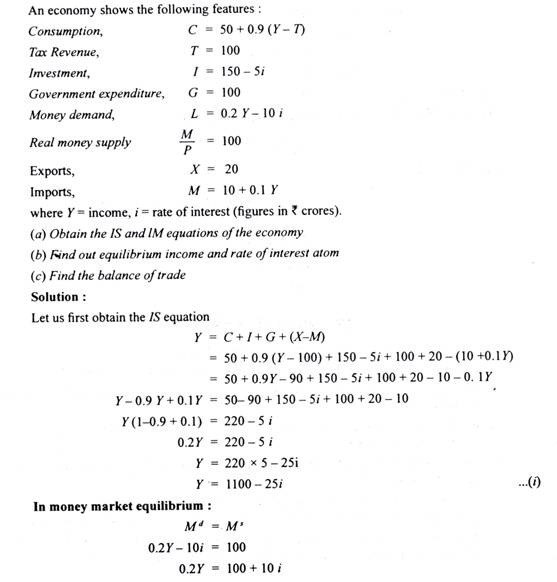 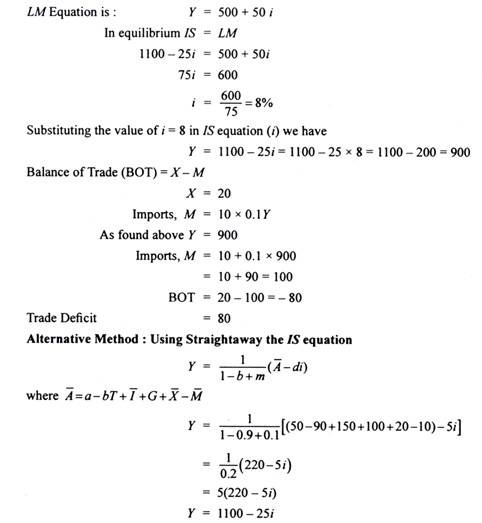