3 Cases for Applicability of Ricardo’s Doctrine!

(i) Many Commodities but Two Countries:

For simplicities sake, let us assume that there are two countries A and B who trade seven commodities.

Whether a country will export more of other commodities depends on the strength of the international demand and the TOT. If Y is demanded more by country B, then country A would specialize in its production and produce less in which it has a comparative disadvantage, say good V. Thus, comparative cost is again the basis of trade in the case of many commodities.

(ii) Many Countries but Two Goods:

The comparative cost doctrine is equally applicable in a multi-country model. Suppose, there are four countries A, B, C, D who trade with two goods X and Y. For simplicity’s sake, let B, C and D be described as a single group of countries.

Thus, for convenience, we have two countries A and the rest of the world who trade goods X and Y on the basis of comparative cost differences. This assumption makes this extended Ricardian model into a 2 × 2 × 1 model.

Ricardo’s doctrine has also an applicability in a multi-country, multi-commodity framework. Let there be three countries A, B and C that exchange goods X, Y and Z with each other. Country A exports X to country B, country B exports Y to country C and country C exports Z to country A. The arrowheads in Fig. 14.3 suggest that trade is a one-way traffic. 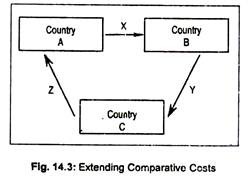 This means that no country exports to another country. But it is not so since export of one country is the import of another country. What is true is that country B pays A for its export good X in country C, country C pays B via country A and so on. Thus trade takes place between many countries and many commodities.