Subject-Matter of the Consumption Function:

Consumption function is simply a name for the general income-consumption relationship embodied in the Psychological Law of Consumption given by Keynes.

Just as the demand curve shows the quantity of a commodity demanded at each possible price, so the consumption function shows the expenditure consumers will wish to make on consumer goods and services at each possible level of disposable income.

This is shown below in a tabular and diagrammatic form: 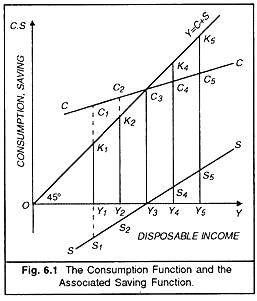 The line CC is sloping from left upwards to the right showing that as income rises consumption spending also rises but not as much as income. At a low level of disposable income such as OY2 consumption is even more than income resulting in dis-saving to the extent of C1K1 (= Y1S1)- As income rises to the level OY2, consumption rises to Y2K2 but still people spend more than their income resulting in negative saving of C2K2 (=Y2S2). At income level OY3, people wish to consume the whole of their income which means zero saving the CC line intersects the 45° line and the saving curve SS cuts the horizontal axis.

As income rises further to OY4 and OY5 levels, consumption spending is less than the income levels resulting in positive saving of Y4S4 and Y5S5 respectively. Thus the consumption function CC shows that as income increases, consumption increases and the saved amount also increases.

Consumption function is the central concept of Keynes’ General Theory. It brought to light the basic fact that in a free-enterprise economy, consumption spending depends, in the short run, on the level of income. Other factors also affect consumption but are stable in the short period with which Keynes was concerned. As income level rises consumption spending also rises but at a slower rate than income with the result that income unspent on consumption-saving-goes on accumulating. If a level of income is to be maintained, the saving out of it must be invested.

Attributes of the Consumption Function: 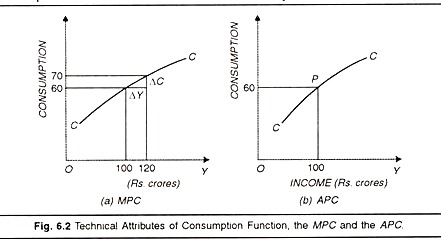 In technical language, it means that the marginal propensity to consume is less than one (less than unity). We can explain the concept with the help of a numerical example. Suppose Y increases from Rs. 100 crorcs to 120 crorcs ; the increment in income AY is Rs. 20 crores. Corresponding to this increase in income, consumption may increase from Rs. 60 crores to Rs. 70 crores, increment in consumption (∆C) being Rs. 10 crores. Hence MFC is ∆C/∆Y i.e., 10/20 = 1/2 = 0.5 (less than unity).

The concept of MPC is of utmost importance as it tells us how an increment in income will be divided between consumption and saving. In fact, the Psychological Law of consumption can be stated as that MPC is always less than one.

2. Marginal Propensity to Save (MPS):

The complement of MPC is Marginal Propensity to Save, written as MPS, It can be easily derived from MPC. We know that an increment in income is divided between DC and an increment in saving ∆S.

APC shows the proportion of aggregate consumption to aggregate income. For example when income is Rs. 100 crores and consumption expenditure is Rs. 60 crores. APC is 60/100 (C/y) = 3/5=0/6 or 60%. Thus, the value of APC for any income level may be found by dividing consumption by income. Prof. Hansen has estimated APC in the United States in normal times to be at 88%. The APC is shown in figure 6.2 (b) on the previous page.

The economic significance of APC is that it tells us what proportion of the total cost of a given output, as a result of planned employment, may be expected to be recovered from the sale of consumer goods alone so that the rest has to be made good by the sale of capital goods.