Consumption and Its Determinants:

Consumption refers to the utilisation of goods and services for the satisfaction of human wants. According to Marshall, it is the process through which human wants are satisfied, and according to Adam Smith consumption is the object of production.

A commodity is produced simply because it is demanded by the consumers. In other words, producers produce goods and services in order that they may be consumed. Some commodities are consumed only once, e.g., apple. Some other commodities are enjoyed over a long period, e.g., a chair or a motor car. The latter type of goods are called durable goods.

Consumption depends on a number of factors. In fact, consumption depends on the broad factors which determine the demand for a commod­ity such as income, taste and preference of buyers, prices of different commodities including those of substitutes and complements, time period under consideration, the pattern of income distribution and so on.

Statistical studies of the law of consumption by the German stat­istician Ernst Engel is the most celebrated of all. This study revealed the following important points about consumption. These points are popularly known as the Engel’s Law.

1. The smaller a person’s in­come, the larger the proportion of it will be spent on food. As poor families have very little in­come, they spend the major por­tion of their income on food which is the primary necessary of human beings.

2. As income of the people increases the proportion of in­come spent on food gradually decreases. From this emerges the conclusion that income elasticity of demand for food is less than 1. Or, in other words, demand for food is income inelastic. This simply means that, the people belonging to higher income groups spend proportionately less on food than those of lower income groups.

3. With an increase in income, the percentage expenditure on luxuries and non-essential items such as recreation increases. At low income such expenditure is almost zero.

4. The percentage of income spent on clothing, rent, fuel and light remains more or less the same at all levels of income.

These conclusions derived by Engel on the basis of his own statistical studies have been confirmed by many subsequent investigations and exten­sive studies of family budget. It has been shown that, although different persons spend their incomes in different ways there is a remarkable simi­larity as regards the general pattern at different times and in different countries. Fig.1 illustrates Engel’s law of consumption. 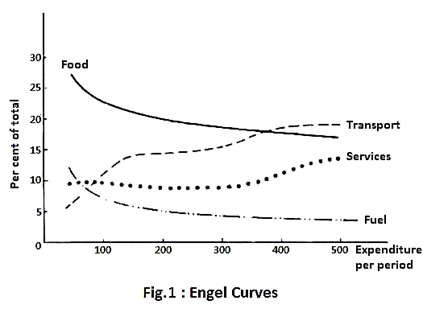 The law is found to be valid in India. A study of India’s consumption pattern during the plan period shows that the expenditure on food items constitutes a major portion of private consumer expenditure in most cases. It is about 68% in rural areas and 55% in urban areas at present.