Consumption Function of Money: Meaning and Relationship with Income!

The functional relationship between consumption and income is called consumption function (or propensity to consume). Consumption is related to income.

We may bifurcate consumption in two parts:

(i) First part relates to consumption when income is zero, i.e., when minimum level of consumption has to be maintained for survival. This is called autonomous consumption (denoted by C).

Where C represents total consumption, C represents autonomous consumption (i.e., minimum consumption for survival when income is zero), b shows marginal propensity to consume (i.e., consumption increases by b for every rupee increase in income. Thus, 0 < b < 1). Y stands for level of income. Clearly, C is assumed to be positive (+) because for survival there has to be some consumption even when there is no income.

(i) Autonomous consumption (C) not influenced by income and

Some numerical sums for further clarification are given below:

Since for survival, there has to be autonomous consumption, therefore, C is greater than zero (C > 0). According to Keynes, as income increases, it is human tendency to increase consumption (0 < b) but increase in consumption is not as much as increase in income, i.e., b is less than 1 (b < 1). Thus, we can show the interrelationship in this way.

(b) Consumption Function Schedule and Curve:

The concept of consumption function is further clarified with the help of following schedule and diagram.

A consumption function curve indicating C = C + bY is drawn in Fig. 8.5. 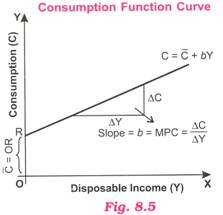 (iv) Since slope of curve is constant, we get a straight line consumption curve.

Remember, consumption expenditure is the function of income, i.e., it depends upon income as shown below:

For instance, if income increases by Rs 100, the tendency is to spend a part, say, Rs 75, on consumption and save the remaining part, i.e., Rs 25. This is known as induced consumption. It should be kept in mind that when income is zero, consumption is still positive (+) because a person has to spend a minimum amount to keep his body and soul together. This is called autonomous consumption.

(ii) When income is very low, consumption expenditure is higher than income. Its reason is that some minimum level of consumption has to be maintained irrespective of low level of income. In such a situation, value of APC (i.e., relationship between income and consumption C/Y) becomes higher than 1.

When consumption expenditure becomes equal to income and there is no saving, it is called break-even point.