Empirical studies of long-term time series data of the US economy for the period 1869-1938 made by the noted American economist Kuznets.

To compare the Keynes’ and Kuznets’ consumption functions, it will be useful to write them in algebraic form and graphically represent them.

Keynes’s consumption function can be algebraically written as below:

where a is a positive intercept term which is also called autonomous consumption as it does not vary with income. The constant a shows that even when income is zero, a certain consumption is present. This is possible when in any year a community can live either on its past savings or borrow from other communities. Keynes’ consumption function is shown in Fig. 9.7. 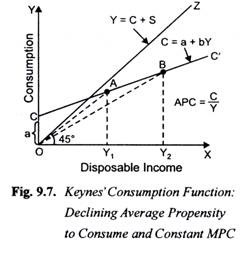 On the other hand, Kuznets found that consumption function is of the following form:

His consumption function presented in equation (2) can be rewritten as: 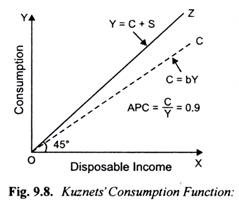