Let us make an in-depth study of the Keynesian Theory of Investment.

According to the classical theory there are three determinants of business investment, viz., (i) cost, (ii) return and (iii) expectations.

According to Keynes investment decisions are taken by comparing the marginal efficiency of capital (MEC) or the yield with the real rate of interest (r).

So long as the MEC is greater than r, new investment in plant, equipment and machinery will take place.

However, as more and more capital is used in the production process, the MEC will fall due to diminishing marginal product of capital. As soon as MEC is equated to r, no new investment will be made in any income-earning asset.

This depends on the immediate profits (cash flows) expected from operating the project and the rate at which these are expected to decline through reduction in the price of output, or increases in the real wages or cost of raw materials and fuel.

If all possible projects in an economy are arranged in descending order of their MEC, investors will accept those with MEC higher than r and reject those whose MEC is lower than r. The MEC is not the same as the marginal product of capital which is concerned only with the immediate effect of additional capital on possible output and not with how long the resulting profits can be expected to persist.

The MEC is the rate of return (profits) on an extra rupee worth of investment. The marginal efficiency of capital decreases as the amount of investment increases (as shown in Fig. 18.1). This is because initial investments are concentrated on the ‘best’ opportunities and yield high rates of return; later investments are less productive and secure progressively lower returns.

If the supply price of capital goods changes over time it becomes necessary to draw a distinction between MEC and marginal efficiency of investment (MEI).

It will be readily apparent from Fig. 18.1 that there is a link between the monetary side of the economy and the real economy a fall in interest rates will stimulate more investment, which, in its turn, will result in a higher level of national income.

If expectations change and investors expect to receive better returns from each investment — because, for example, of technological progress — then at any given rate of interest such as 20%) more investment will be undertaken than before; that is, the marginal efficiency of capital schedule will shift to the right, as shown in Fig. 18.1(b), and investment will increase from OI2 to OI0.

The MEC is calculated by using the following formula:

It may be noted that e varies directly with r and inversely with C0, i.e., the initial cost of purchasing the machine. A simple method of calculating e for an infinitely durable capital good is available. In this case the economic life of the machine (which depends on the annual rate of depreciation) is not known. We know that 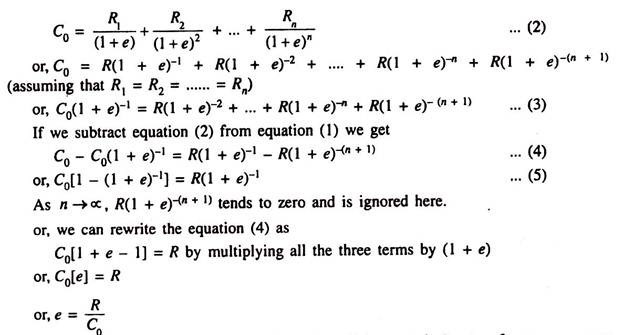 The term R is called by Keynes the expected (prospective) rate of return on new investment (the machine) and C0 is the purchase price of the machine. If e exceeds r, an income-earning asset like a machine should be purchased.

Anything which increases a firm’s profit prospects by increasing R will increase its level of investment. On the other hand, if the purchase price of capital (C0) increases, investment will fall.

(i) Increased optimism among managers:

If managers are more optimist about the future, they will place more orders for machines. This will enable them to make more profit by venturing out in those areas where demand for consumer goods is picking up.

(ii) An increase in the growth rate of the economy:

Keynes assumed that all investment is autonomous and is thus independent of national or per capita income. However, according to the acceleration theory of investment (to be discussed later in this chapter), investment has an induced component as well. So anything which increases the demand for consumer goods is always beneficial for the capital goods producing industry.

If India’s growth rate (as measured by the annual rate of increase of per capita income) increases there will be more demand for consumer goods such as food and textiles. So industries producing such goods will be stimulated and the managers of such industries will place more orders for purchase of machines.

(iii) An increase in capital stock:

An increase in society’s stock of capital — all other factors remaining the same — will lead to a fall in the marginal physical product of capital and will reduce the MEC by lowering the prospective rate of return on new investment.

(iv) A change in technology:

A favourable technological change (not an adverse technology shock) will shift the MEC schedule to the right and will increase the volume of investment even if the rate of interest remains constant.

(v) Changes in the rate of interest:

Thus the Keynesians economists claim that monetary policy will not be very effective in influencing the level of investment in the economy. By contrast the monetarists argue that investment is very interest rate-sensitive.

So even small changes in interest rates will have significant impact upon investment (the marginal efficiency of capital/investment curve being very shallow). Thus, monetarists claim that monetary policy will be effective in influencing the level of investment. Empirical evidence tends to support the Keynesian view that interest rates have only a limited effect on investment.

However, the neo-classical economists such as Dale Jorgenson and his co-workers have abandoned the classical and the Keynesian theories of investment on the ground that both are unrealistic. They have developed an alternative theory of investment in terms of the profit- maximising behaviour of a firm under perfect competition. It is to this theory to which we turn now.