In this article we will discuss about the price elasticity of demand, explained with the help of suitable diagrams.

In 1890, Alfred Marshall, the great neo-classical economist, devel­oped a special measure for the response of one variable, such as quantity demanded, to change in another variable, such as price. It is called elasticity which is a measure of market sensitivity of demand.

The quantity demanded of a commodity is affected by a large number of variables. Elasticity of demand measures the degree of responsiveness of quantity demanded of a commodity to a change in one of the variables affecting demand (i.e., to a change in any one of the demand determinants). The response to change in each influencing variable is meas­ured by a separate elasticity concept. We may start with the most commonly encountered of all elasticities, viz., and price elasticity of demand. 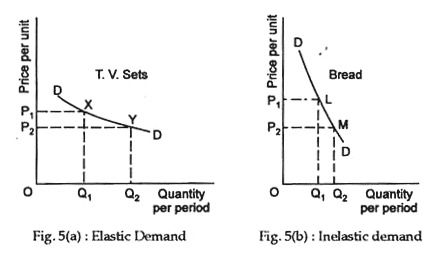 Price elasticity of demand is measured by using the formula:

The symbol A denotes any change. This formula tells us that the elasticity of demand is calculated by dividing the % change in quantity by the % change in price which brought it about.

Thus, if the price of a commodity falls from Re.1.00 to 90p and this leads to an increase in quantity demanded from 200 to 240, price elasticity of demand would be calculated as follows:

Here Ep is called the coefficient of price elasticity of demand and is always a pure number (like ½, 1, 2,3, etc.) because it is the ratio of two percentage changes.

In Fig. 1 total revenue falls from OP1LQ1 to OP2MQ2. If quantity demanded increases only enough to offset the fall in price, total outlay will be unchanged and demand is said to have unit elasticity. We can adopt the same approach for price rise. 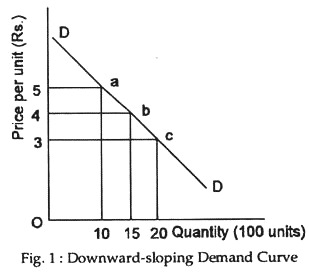 The three main points to be noted here are listed in Table 1:

1. If elasticity of demand exceeds unity (elastic demand), a fall in price increases total expenditure on the good and a rise in price reduces it.

2. If elasticity is less than unity (inelastic demand), a fall in price reduces total expenditure on the good and a rise in price increases it.

3. If elasticity of demand is unity, a rise or a fall in price leaves total expenditure on the good unaffected.

These three cases can be shown in Table 2: