E. Phelps is a Nobel Laureate for the same work in 2006. Simple Original Phillips Curve does not take into account expected or anticipated inflation while fixing wage and price.

Friedman and Phelps introduced an adjustment in Phillips curve with respect to anticipated or expected inflation (πe) as a factor influencing the growth rate of money wage. As the modern Phillips curve incorporates the expected inflation, therefore, when workers and firms enter into wage negotiations while fixing the wage and price they bargain over the real wages, and both sides are willing to adjust nominal wage for any inflation expected during the contract period.

Higher the expected inflation (πe) greater is the demand by workers to increase the wages. Firms are willing to give high wage because they expect that prices will increase which will lead to increase in their profit. Thus, Modern Phillips curve showed that unemployment depends not only on the level of inflation but also on the excess of inflation over the expected value. 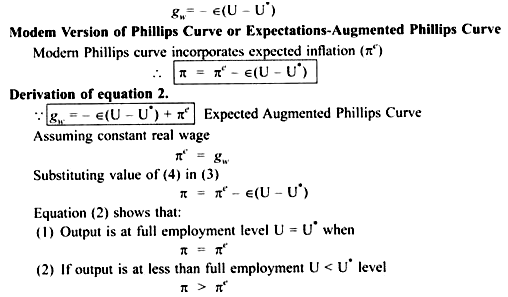 (i) The level of inflation, and

1. In the Short Run, Phillips Curve (SRPC) shows an inverse relationship between unemployment rate and the inflation rate. Due to an increase in the aggregate demand, the economy will move up to the left above the short run Phillips curve and inflation results.

Initially, the economy is in equilibrium at point E (Fig. 13.9)

economy moves up to point A; unemployment decreases. But the economy will not stay at A because:

2. SRPC shows that when actual inflation and expected inflation are equal, that is, π = πe, the economy is at NRU (U*)

(i) Short run trade off between unemployment and inflation rate are same because the slopes are equal. The gap between the two curves is because of expected inflation (πe).

(ii) The SRPC of 2006 and 1990 are relatively flat. In 1990, full employment occurred when the annual inflation was 2% but, in 2006, full employment occurred at 7% inflation, as a result, SRPC of 1990 lies below SRPC of 2006. The rate of πe in moving the Phillips curve adds automatic adjustment mechanism to the aggregate supply side of the economy.