Derivation of Long Run Vertical as Curve (LRAS) to find the Relationship between Inflation and Output Level!

LRAS curve shows the relationship between inflation and output when actual inflation (π) and expected inflation (πe) are equal, that is, π = πe.

LRAS is a vertical line at output Y* obtained by joining points on SRAS curves at which π = πe (Fig. 13.12) and there is no trade off between the two variables.

With given πe, higher inflation rates are accompanied by higher output.

When the economy is at full employment level, that is Y = Y*

Thus LRAS shows that in the long run the level of output will be independent of the inflation rate. (Y = Y*) 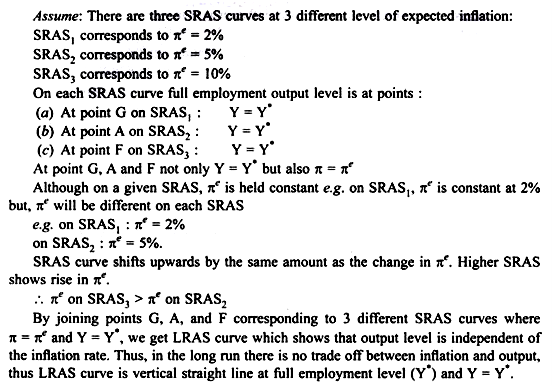 How are Assumptions made about expectations or

(i) Why is πe included in AS function? or

(ii) What determines πe? or

(iii) Why does SRAS curve shift? or

(iv) Why should the wage adjustment to inflation respond to yesterday’s actual inflation or tomorrow’s expected inflation? or

(v) How are expectations formed about πe? or

(vi) What are the different ways of inflation adjustment compensation?

There are two formulations about πe :

Expectations are adaptive if they are based on the past behaviour of inflation.

Under adaptive expectations, people expect inflation rate to rise at the same rate as it rose last year.

There is no difference between last year inflation and expected inflation.

If expectations are adaptive it becomes impossible to tell whether the expected inflation (πe) term in the AS curve represents πe or compensation for past inflation.

If πe = πt, there is no difference between past inflation and expected inflation.

The approach was given by Robert Lucas and Thomas Sargen.

However, there cannot be any formula for expected inflation based on rational expectations. But still, Robert Lucas tried and was able to solve the macroeconomic problems of why are people not able to adjust their expectations quickly (a big hole in the expectations-augmented Phillips curve) to match the prediction by allowing for the role of mistakes.

Lucas is of the view that a good economic model should not rely on the public who makes easily avoidable mistakes.