Read this article to learn about Derivation of Expectation – Augment Philips Curve Equation from the AS Equation!

SRAS is derived from the Phillips curve. SRAS curve shows the relationship between output and the price level.

Milton Friedman and Edmund Phelps pointed out that the original Wage-Phillips curve equation (1) ignored the effect of expected inflation on wage rate.

Workers are interested in real wages and not in the nominal wage they receive, so they want that their nominal wage should include the expected inflation that would take place between the time the wages are fixed and the time when wages are paid which should be fully adjusted for the inflation they expect.

Firms agree to pay higher nominal wage because they will be able to sell their goods at a higher price. But when both wage and price rise at the same rate, both the workers and firms will be in the same position as they would be in the absence of inflation.

π is determined by both:

(b) Unemployment or output. 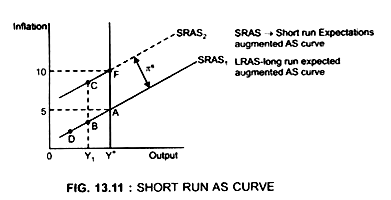 πe is constant on each SRAS curve.

πe is 5% on SRAS1. If expected inflation increases to 10%, SRAS curve shifts upwards from SRAS1 to SRAS2

Changes in πe explain why Phillips curve breaks down.

4. SRAS is a flat curve which shows:

In the short run, very large change in output is required to generate a given change in inflation.

5. On each SRAS curve there is a tradeoff between π and output

SRAS curve shifts up with πe. The inflation rate, therefore, corresponding to any given level of output changes over the time as πe changes.

Higher the πe, higher is the inflation rate corresponding to a given level of output.

(Compare points B and C at output level → Y1)

What are the Reasons for Wage Stickiness?
Modern Version of Phillips Curve (With Diagram)