An organization has various options for selecting a pricing method. Prices are based on three dimensions that are cost, demand, and competition.

The organization can use any of the dimensions or combination of dimensions to set the price of a product. 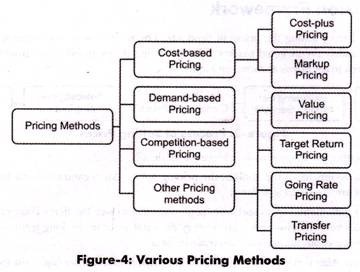 The different pricing methods (Figure-4) are discussed below;

These two types of cost-based pricing are as follows:

Cost-plus pricing is also known as average cost pricing. This is the most commonly used method in manufacturing organizations.

In economics, the general formula given for setting price in case of cost-plus pricing is as follows:

Mark-up percentage (M) is fixed in which AFC and net profit margin (NPM) are covered.

ii. For determining average variable cost, the first step is to fix prices. This is done by estimating the volume of the output for a given period of time. The planned output or normal level of production is taken into account to estimate the output.

The second step is to calculate Total Variable Cost (TVC) of the output. TVC includes direct costs, such as cost incurred in labor, electricity, and transportation. Once TVC is calculated, AVC is obtained by dividing TVC by output, Q. [AVC= TVC/Q]. The price is then fixed by adding the mark-up of some percentage of AVC to the profit [P = AVC + AVC (m)].

iii. The advantages of cost-plus pricing method are as follows:

b. Involves simplicity of calculation

c. Insures sellers against the unexpected changes in costs

The disadvantages of cost-plus pricing method are as follows:

a. Ignores price strategies of competitors

b. Ignores the role of customers

Refers to a pricing method in which the fixed amount or the percentage of cost of the product is added to product’s price to get the selling price of the product. Markup pricing is more common in retailing in which a retailer sells the product to earn profit. For example, if a retailer has taken a product from the wholesaler for Rs. 100, then he/she might add up a markup of Rs. 20 to gain profit.

It is mostly expressed by the following formulae:

b. Markup as the percentage of selling price= (Markup/ Selling Price)*100

The success of demand-based pricing depends on the ability of marketers to analyze the demand. This type of pricing can be seen in the hospitality and travel industries. For instance, airlines during the period of low demand charge less rates as compared to the period of high demand. Demand-based pricing helps the organization to earn more profit if the customers accept the product at the price more than its cost.

The aviation industry is the best example of competition-based pricing where airlines charge the same or fewer prices for same routes as charged by their competitors. In addition, the introductory prices charged by publishing organizations for textbooks are determined according to the competitors’ prices.

In addition to the pricing methods, there are other methods that are discussed as follows:

Implies a method in which an organization tries to win loyal customers by charging low prices for their high- quality products. The organization aims to become a low cost producer without sacrificing the quality. It can deliver high- quality products at low prices by improving its research and development process. Value pricing is also called value-optimized pricing.

Helps in achieving the required rate of return on investment done for a product. In other words, the price of a product is fixed on the basis of expected profit.