This is because, in a short period, a capitalist economy expe­riences cyclical fluctuations in output, prices, employment and many other macroeconomic variables.

The fluctuations in actual real GDP around the level of potential GNP, as illustrated in Figs. 2.5 and 2.6, together with the associated variations in other macro- economic aggregates, like rate of inflation, rate of investment, etc. forms the cornerstone of macroeconomics. 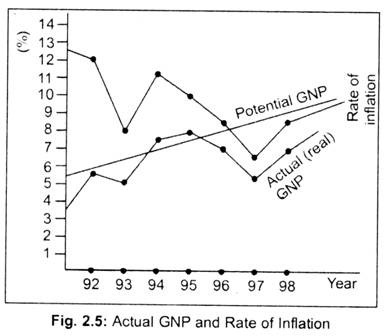 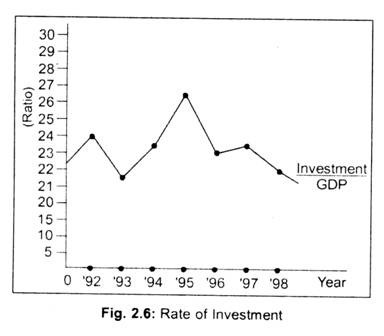 The data (Table 2.3) that we have chosen to explain cyclical fluctuations covers the early period of India’s new economic policy regime and macroeconomic policy adjustment measures. In Fig. 2.5, the potential GNP line—the level of output that the economy could produce at high rates of resource utilisation has been drawn as a smooth line. This line suggests that the Indian economy could move along such straight-line path over a long period of time. 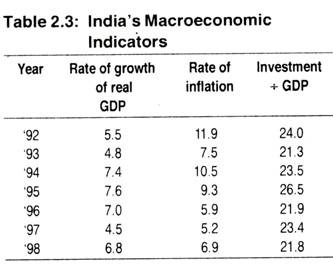 But, in the short run we find movements in actual (real) output level and that diverges from the potential GNP. Looking at Fig. 2.5 we can trace the cyclical course of real GNP over the period 1992-98. In this figure, one can see that the rate of inflation that had climbed up to 11.9 p.c. in 1992 declined to 6.9 p.c. in 1998 with ups and downs in-between periods. Investment + GDP ratio too, as illustrated in Fig. 2.6, fluctuates in the short run. From this description of macroeconomic events of the Indian economy during the 1990s, one finds fluctuations in macroeconomic aggregates.