Firstly, according to modern economists, the marginal productivity theory does not take into account the supply side of a factor of production.

Secondly, the marginal productivity theory is concerned only with the units of factors of production, not with the determination of prices of factors. According to modern economists, as the prices of products are determined by the interaction of two forces, demand and supply in the market.

Demand for a Factor of Production:

According to the modern theory, the demand for a factor of production depends on two parameters, which are explained as follows:

i. Magnitude of demand for a factor:

Involves three conditions, which are as follows:

Implies that there would be high demand for a factor of production if it is highly important in the production process.

Implies that there would be high demand for a factor of production if the demand for output or final product is high.

Implies that there would be low demand for a factor of production if it has close substitutes.

ii. Elasticity of demand for a factor:

Refers to the responsiveness of demand for a factor with change in its price.

The elasticity of demand for a factor also depends on three conditions, which are as follows:

Implies that if the price of a factor is very low with respect to the total cost, then the demand for that factor will be inelastic and vice versa. 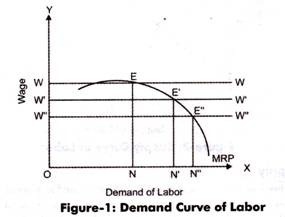 The market demand curve can be derived by adding up the MRP curves of different organizations in an industry-, which is shown in Figure-2: 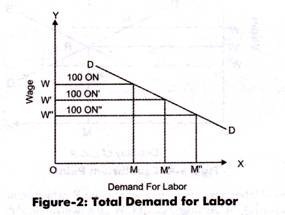 However, in Figure-2, when the wage rate for an industry is OW, then the demand for labor is OM = 100 ON, which is the demand for labor for 100 organizations in the industry). Similarly, when the wage rate of industry is OW then demand of labor is OM’ (=100 ON’) and at OW” it is OM” (=100 ON”). The downward slope of demand curve DD represents that increase in labor would result in the decrease of marginal productivity.

Supply of a Factor of Production:

After discussing the demand for a factor of production, it is important to understand its supply, so that the price of the factor can be determined. Determining the supply of factors of production is a complex task as each type of factor creates a problem. For example the quantity of land is fixed, thus its supply cannot be increased or decreased with change in its prices.

Similarly, if we analyze the total supply of labor in a country, it depends on a number of factors, such as size and composition of population, efficiency of labor, geographical distribution, expected wages, and educational qualifications.

In such a case, the total supply of labor is fixed; however, it can be increased by increasing the working hours of labor employed. Moreover, the supply of capital also depends on factors, such as rate of interest, saving capacity of individuals, and their willingness to save. Therefore, in short, it can be said that the supply of a factor is also a function of price. 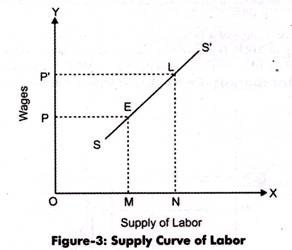 Interaction of Demand and Supply:

Figure- 4 shows the equilibrium point where the price of a factor of production is determined: 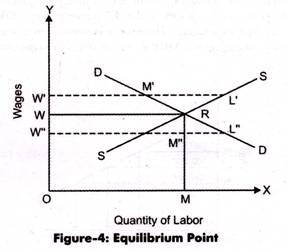 The modern theory of factor pricing was an attempt to make improvement in marginal productivity theory.

However, the modern theory is criticized due to its weak assumptions, which are as follows:

ii. Assumes that there is homogeneity in all the factors of production, which is not true in real market scenario.

iii. Assumes that all factors of production have close substitutes, which is not always possible.

Marginal Productivity Theory: Types, Assumption and Limitations
Equilibrium of a Firm in Factor Market (With Diagram)