Let us make an in-depth study of the determination of price, quantity and income of a factor of production.

Distribution is one of the main subjects of microeconomics. It is concerned with the principles underlying the sharing out of the national income among the owners of the factors of production.

The first type of analysis is known as functional distribution, which is a study of factor-earnings (i.e., rent, wages, interest and profits being the earnings of land, labour, capital and organisation, respectively). The second type of analysis is called personal distribution, which is a study of the earnings of individuals or groups in a community.

The same person may receive the income in the form of rent from his own land, wages for his services, interest from his capital invested and profit from his own enterprise. However, functional distribution pays too much attention to the factors and too little to the persons among whom the national product is distributed.

According to neo-classical theory, the income of any factor of production (and hence the amount of the national product that it is able to command) depends on the price that is paid for the factor and the amount that is purchased or hired. For instance, total wage = the wage rate = the number of workers employed. Thus, factor pricing and income distribution are interrelated. If the wage rates rise due to high demand for labour the share of labour in national income will also rise and workers will now be able to buy those things which they could not previously afford.

The market price of any commodity like carrots is determined by the impersonal forces of demand and supply. In Figure 12.1 the demand and supply curves for some factor of production are D1 and S. The equilibrium price and quantity are p1 and q1, respectively. The total income earned by the factor is indicated by the area Op1 Eq1 (which is Op1 x Oq1). 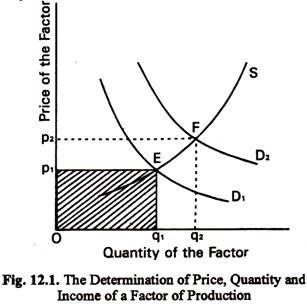 This is based on the assumption that the price of all other factors of production, the prices of all goods, and the level of national income are given constants. Fluctuations in the equilibrium price and quantity may cause fluctuation in the return to the factor, in its relative earnings (compared to other factors) and in the share of national income going to the factor.

Thus, to quote Richard Lipsey, “According to neo-classical theory the problem of distri­bution in a free-market society can be reduced to the question of the determinants of the demand and supply of factors of production, plus the problem of determining the effect of the departures from a free market caused by such forces as monopolistic organisations, govern­ment action and unions”.

Factor Pricing and Income Distribution: An Overview
The Marginal Productivity Theory of Distribution (With Diagram)