Let us learn about the effects of price control by the government in the market.

Sometimes businessmen create an artificial scarcity of an essential commodity with the motive of raising the price of the commodity. The basic motive is, of course, profit-maximization. In the process, consumers are exploited since they are now forced to purchase commodity at a higher price.

In order to protect the interest of the consumers the government imposes price ceiling or maximum price above which no one will sell the commodity. This is called ‘price ceiling’ or ‘maximum price legislation’. 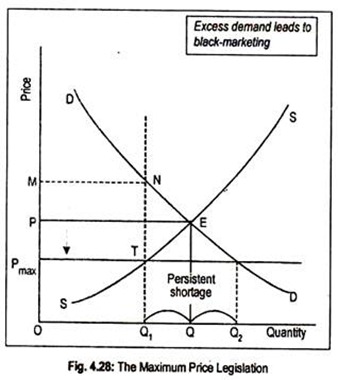 At this lower price, consumers demand a larger quantity OQ2 but producers cut back their supplies to OQ1. The immediate effect of this price ceiling is, thus, the emergence of excess demand or persistent shortage of the commodity. Because of the legal stipulation of price, neither buyers nor sellers dare enough to raise the price to eliminate excess demand. So, excess demand in the market would stay.

Though maximum price legislation is made by the government to improve the welfare of the people, some people, in the process, gain, while some lose. Producers may lose as they are supposed to accept lower prices. T

his may force some producers not to produce the commodity. Further, some consumers lose, but not all; some consumers who can purchase the good at a lower price stand to gain, but those who have been ‘rationed out’ and cannot afford to buy the good at all stand to lose.

Now, sellers would devise various policies to allocate OQ1 among the buyers. Firstly, sellers may adopt a democratic principle of distribution i.e., the principle of ‘first-come, first-served’. Secondly, sellers may hoard it ‘under the counter’ and distribute it only to the favoured customers or friends. Naturally, these allocational principles would certainly put some of the buyers in a disadvantageous position.

The first method may lead to formation of long queues in front of the shop thereby creating the possibility of disturbance in the locality. Though democratic, it is not necessarily fair. The second method is equally unacceptable to some buyers, particularly those who do not have any links with the sellers.

Of this, Pm TNM would be received by the black market price. For OQ1 amount of good buyers are willing to pay OMNQ1 amount. Of this, Pmax TMN would be received by the black marketers as illegal receipts. Since not all buyers can afford to pay such high illegal price, part of the limited quantities would be supplied at controlled price and the rest at illegal price.

Thus, black marketing emerges against the backdrop of limited supplies. In an attempt to allocate limited quantities, the government may find it wise to adopt a system of rationing. Under rationing, the government restricts consumption by assigning a quota to each and every individual so that available goods can be distributed equally.

By giving ration coupons to each and every individual, government may allocate available goods among people equitably. Thus, rationing may be justified during war or emergency when scarcity of a particular commodity or commodities hits the economy. In other words, rationing may be introduced whenever there is a shortage of essential commodities.

Though this method cannot meet all the demands, price control with rationing may yield good result in this direction. So, price control and rationing are complementary to each other. These two can ensure stability in prices. Truly speaking, to make the price control an effective instrument, a system of rationing should be introduced.

The government often passes law to fix the minimum price or floor price at which commodities may be sold. This minimum price legislation is introduced by the government to protect the interests of producers, mainly agriculturists.

Whenever there is a crash in prices, say of wheat, due to bumper production, the government issues circular that no one would be allowed to sell wheat below the stipulated price. Such is called the minimum price. Certainly, the legal floor price fixed by the government is kept above the equilibrium price determined by the demand and supply curves.

The effect of floor price has been shown in Fig. 4.29. OP is the equilibrium price determined by the intersection of DD and SS curves. Suppose, price crashes below OP— thereby causing great hardships to producers. To woo the producers, the government fixes the minimum price at OPmin below which no one will be allowed to sell. 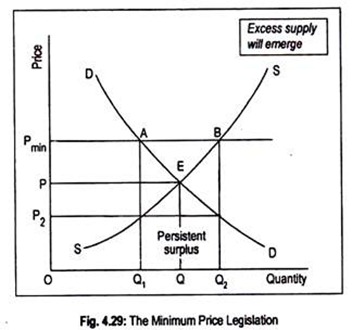 At this price, there occurs an ‘excess supply’ or persistent surplus measured by the distance AB (= Q1Q2). Because of excess supply the possibility of black marketing does not arise. But some producers may try to sell their stocks of unsold goods at a price below OP1, of course, in a clandestine manner.

We have just shown that, at the price OPmin, there occurs an excess supply of Q 1Q2. The government, in order to safeguard the interests of producers, may purchase all the quantities at the price OPmin. This will result in an increase in governmental expenditure to the tune of Q1Q2BA. This is called ‘subsidy to the producers.

In view of all these, champions of perfectly competitive market argue that the government intervention in normal market mechanism may bring dangers in the economy, particularly if such intervention is based on pure discretion rather than on any socio-economic consideration. Above all, maximum or minimum price legislation may bring disaster if government machinery becomes inefficient.